What makes a coin?

I have just returned from the Theoretical Roman Archaeology Conference, where I presented a paper as part of a larger panel examining the potential information to be gained from archaeological small finds, the day-to-day material culture often uncovered on excavation. As the panel organisers, Ian Marshman and Anna Walas wrote, 'facing substantial funding cuts some museums and archives have controversially chosen to suspend enquiries or to charge for access to their collections. It seems pertinent to re-emphasise the importance of artefact-based research before we loose the facilities and skills needed to undertake it.'

The panel got me to think 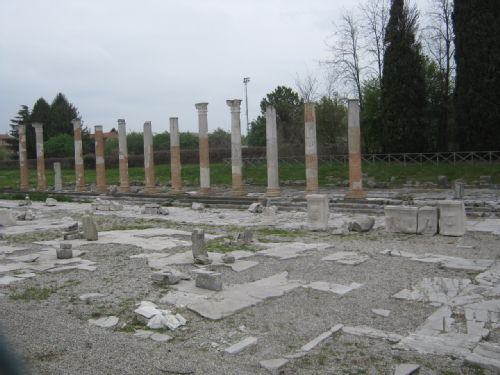 about some of the information which gets 'lost' in the publication process, impressions and feelings one gets from handling coins, and which cannot be translated via text or black and white publication. In particular I was encouraged to think about the coins I had been identifying as part of an Australian survey project at Aquileia, a UNESCO world heritage site in Northern Italy (the forum in the town pictured right). The project (Beyond the City Walls), led by Dr. Arianna Traviglia of Macquarie University in Australia, is examining life in the 'burbs of this ancient Roman town.

Many of the coins found during the survey are typical of the type of material found during excavation - bronze coins, often very worn or poorly preserved, not the stuff that excites the interest of people outside the discipline of numismatics. But handling these finds reveals a lot about the experience of Romans in the town.

One of the pieces found was a copper half coin (pictured below), which was so worn that no design remained. These half coins are actually quite common in the Roman world, and were probably older coins cut so that they fit in with a new monetary system introduced under the emperor Augustus. Though this particular coin is very worn, the edge of the cut is sharp, suggesting that it was cut and thus still in use long after the design of the coin had worn away.

Without a design, users must have relied on other criteria to identify this coin (half an as): the distinctive copper colour, perhaps, or the size and shape. A cognitive psychology study published in 2005 noted that for modern coins, size, colour and edging are more important than design in coin discrimination. I think there is much to be said for this. How many of you can recite from memory the design of a 20 pence piece, for example? Or do you rather (as I do) rely on the distinctive shape of a 20p piece, as well as its silver colour, to identify it? The heavy wear on many coins from the ancient world suggest that colour, size and shape were also important in allowing coin users to discriminate between different denominations, and by examining pieces like that featured here, we can better understand how the Romans understood and identified their coinage, allowing us to reconstruct the brain-artefact interface.

This sort of understanding really only comes from handling the material, and I join Ian and Anna in the hope that, by identifying the sorts of information that can be gained from artefact-based research, we might win the resources and support to allow this type of work to continue in the future.

(A full article on this topic is forthcoming. For those interested in the psychology study see Horner, J. M. and Comstock, S. P. (2005) What are important visual features for coin discrimination? Applied Cognitive Psychology 19:1211-28.)

As part of my research project The Beginnings of Empire: Visualising Rome in the Republican Provinces 168-27 BC I am examining coin icongraphy to better understand how Rome and other cultures interacted during Roman expansion. While examining Macedonia I was struck by a particularly odd specimen, discussed below.

The region of Macedonia came under Roman 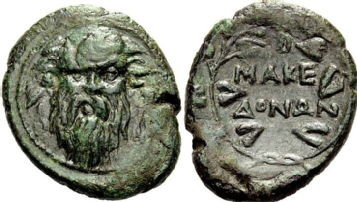 control in 168 BC, after Lucius Aemilius Paullus defeated Perseus of Macedon at the battle of Pydna. The hellenistic kingdom of Macedonia was divided into four merides or administrative territories, each of which was given a capital (Amphipolis, Thessaloniki, Pella and Pelagonia). The quaestors who were likely attached to Aemilius Paullus, Gaius Publilius and Lucius Fulcinnius, probably took over the existing Macedonian mints. Amongst other issues, both released a coin type with the head of Roma on the obverse, and their titles and the name of Macedonia within an oak wreath (a traditional Macedonian type) on the reverse. The choice of Roma is unusual at this time, when such blatant statements of Roman control and power on coinage were rare. The type also had multiple associations: Roma is often portrayed wearing the helmet of the hero Perseus, the same helmet that Macedonian kings (e.g. Philip V) had worn on their coinage. How this image was 'read' by the Macedonian population is thus uncertain.

Mediating Imagery: 'Roman', 'Macedonian', or neither?

Soon after the release of the Roma coin types in 168-166 BC, a new type was released, overstruck on the earlier issues. The new type was unusual in both Macedonian and Roman contexts: a frontal head of Silenus on the obverse, and the name of Macedonia within an ivy-wreath on the reverse, along with the Latin letter D. MacKay (ANSMN 14, 5-13) suggests that the letter D stood for decreto, a decree of the Senate allowing for the recoining of the earlier aes issues to take place. The imagery of the earlier coin was thus unsatisfactory, either to the Macedonians, or to the Romans, and the coinage was overstruck with this new and unusual type. The traditional interpretation of the Silenus type by Gaebler suggested that it was a canting type, or a pun on the name of a Roman official called Silanus. This may be the case, but in the absence of evidence to suggest that there was a Roman official named Silanus in Macedonia at this time, an alternative possibility may exist. Coinage is a key media through which conqueror and conquered interact, and the 'hybrid' imagery of Roma and the oak wreath was deemed unsatisfactory to one or both parties in this particular context. Instead, a coin type may have been chosen that was neither offensive, nor particularly symbolic, to either the Romans or the Macedonians: the god Silenus. The fact that the god is portrayed frontally, also highly unusual in both Roman and Macedonian visual culture at this time, suggests the image was chosen because of its foreign nature. Although 'hybrid' or 'creole' images are important in understanding how different cultures interact, we should perhaps also look for this third type of artefact, one which mediates by being 'foreign' to all concerned.

(Based on 'Coinage between Cultures: Mediating Power in Roman Macedonia', The In Betweenness of Things: Materializing Mediation and Movement between Worlds, The British Museum and University College London, 22-23 March 2013. A more detailed publication is forthcoming. Above image reproduced courtesy of Numismatica Ars Classica, Auction 59, lot 1610)

April's Coin of the Month

presents an intriguing type, the classification of which remains undetermined. The obverse depicts jugate busts facing right. The device on the reverse is unquestionably an Armenian tiara with its distinctive pointed spikes on top and neck and ear flaps hanging from the bottom. Parts of a circular legend are visible, but remain mostly illegible (published in RPC Supplement II, no. S2-I-5488, AE 8.76g). Thus far only two other issues are known depicting an Armenian tiara: the denarii of Mark Antony (Sydenham, The Coinage of Caesarea in Cappadocia, 1205) and Augustus (Roman Imperial Coinage, Vol. I, 516). The attribution of this unique coin remains uncertain. The portrait is unquestionably that of a Julio-Claudian, but it is difficult to identify the emperor with certainty without the aid of a legible legend. Despite this, a number of candidates may be proposed.

A likely candidate is Augustus, for it was during his reign that pro-Roman rulers were established on the Armenian throne on several occasions. In 5 BC Augustus dispatched Roman forces under the leadership of Tiberius, who appointed Artavasdes (a grandson of Tigranes the Great) to the throne. Upon the death of Artavasdes, his son Tigranes was successful in petitioning Augustus for the kingship and arrangements were made for him to receive the crown from Gaius Caesar in Syria. The following years saw a number of rulers appointed by Augustus, including members of the ruling dynasty of Media Atropatene and a scion of the house of Herod the Great. In consequence, this type may have been issued to commemorate any of the above events. During Tiberius’s reign, Rome once again was involved in Armenia’s political affairs, when in AD 18 the Emperor dispatched Germanicus to place Zeno, son of King Polemo of Pontus, on the Armenian throne to resolve a political vacuum. Drachms and didrachms were issued in Caesarea in Cappadocia to commemorate this event. It may be the case that these bronzes were issued for the same occasion, although not necessarily at the same time and place. Nero is also a likely candidate, for it is well recorded that in AD 66 Tiridates, the pro-Parthian king of Armenia, received his crown from the Roman emperor during a lavish ceremony in Rome; these coins may have been issued to celebrate this occasion.

As for the second portrait, it is highly unlikely that it is one of the above mentioned Armenian kings, since there is no precedent for the representation of a ‘client king’ jugate with a Roman emperor on the obverse. The second person is most probably a member of the imperial family, though difficult to identify without a legible legend.

This month’s coin was chosen by Jack Nurpetlian, who recently completed his PhD thesis on the Roman period coinages of the Orontes Valley in Syria. Jack’s research focuses on Roman provincial coins of the Syro-Phoenician territories, in addition to his personal interest in ancient Armenian coins.

Tags: Coin Of The Month |