Glorification and personification on the Judaea Capta coinage

When Titus captured Jerusalem and destroyed the Second Temple in 70 AD, the triumph awarded to him and his father Vespasian was swathed in luxury and decadence. This was a victory that celebrated the violent result of years of strained relations between Jerusalem and Roman governance. The taking of Jerusalem involved a long and bloody siege resulting in the deaths of a reported 1.1 million people, most of whom where Jewish (Josephus, Jewish Wars 6.9.3). Those who survived were paraded through the streets of Rome, and the spoils of war contributed to the building of the iconic Flavian amphitheatre we know as the Colosseum.

The Roman victory, as so often was the case, was advertised upon the contemporary coinage. As travelling propaganda, these coins reinforced the idea of Roman supremacy and the might of the empire. The Judaea Capta type was minted in various denominations in the name of Vespasian and both of his sons, and in spite of several variations in design the overall message remained the same.

The legend on the reverse states IVDEA CAPTA ,‘Judaea conquered’, and the coin depicts a woman seated beneath a palm tree, with a man, interpreted as the emperor, watching. The woman is Jerusalem, her hand to her cheek in a traditional expression of mourning. She is wearing civilian dress, and reflects the prophecy of Isaiah 3.26: ‘…And her gates shall lament and mourn, and she being desolate shall sit upon the ground’ (Young (1992) 170). By contrast, the male watching is standing, and still wears his armour, his foot placed on a helmet. The palm tree sets the scene of the victory in Judaea.

Personification was often used by Rome to reflect victory, as it expresses an effective message that was simple to comprehend. In this case, the use of opposing characteristics of the figures on the coins is extremely powerful in conveying the intended message. Jerusalem is depicted as female, and therefore as weak and submissive in contrast to the male figure representing Rome. The male figure, often interpreted as Vespasian himself, stands in reference to his elevated position over the woman in his victory. Where the woman is unarmed, the man is still dressed for battle in a reflection of victory

Other versions of this coin replace the armoured man with a winged Victory, or sometimes a bearded man with his hands tied behind his back. The latter is a depiction of a soldier of Jerusalem, bearded to reflect his ‘barbarian’ status in the eyes of the Roman Empire. His weapons and armour are laid down beside him in an image of defeat (RIC II.1² Vespasian 159). The legend also has variations, such as IVDAEA DEVICTA, ‘Judaea defeated’ (RIC II.1² Vespasian 1120), or DE IVDAEIS ‘[the booty] from the Judaeans’ (RIC II.12 1179) in reference to the wealth stolen from the temple of Jerusalem. The palm tree has been interpreted as a representation of Rome victorious over Judaea.

The coin is one of many examples of media expressing the Flavian victory over the province of Judaea, including the arch of Titus which still stands proudly at the entrance to the Roman forum today. In a passing glance it appears as just another Roman victory arch, but if you take a closer look you can spot iconography relating to the siege, including a parade of people carrying aloft a menorah from the temple. 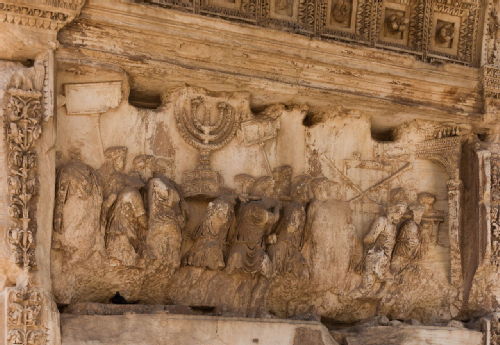 Close-up of the menorah being carried in the victory parade on the Arch of Titus .Image from WikimediaImages from Pixabay.

This month's entry was written by Rebecca Preedy. Rebecca is an Ancient History and Classical Archaeology with Study Abroad student. She is completing her final year at Warwick after a year abroad at La Sapienza. Since studying in Rome, Rebecca has been fascinated by the ancient city and is hoping to continue her studies with a postgraduate degree in Roman Material Culture.

• Carradice, I. (2012) ‘Flavian Coinage’ in The Oxford Handbook of Greek and Roman Coinage ed. W.E. Metcalfe