All entries for Wednesday 01 January 2020

A Bronze Neapolitan Coin and its Relevance to Rome 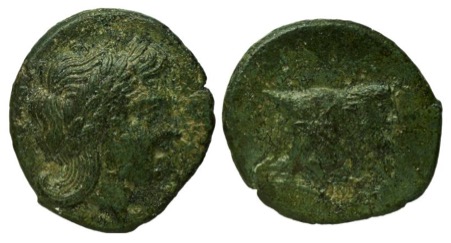 This simple bronze coin is part of a collection of bronze and silver coinage discovered in the Naples area, dating to the late fourth century BC. It has often been described as one of the first true ‘Roman’ coins, and as such it is the first entry in Michael Crawford’s Roman Republican Coinage, the standard typology of Roman coins from this period. This is slightly misleading, given that Neapolis (modern day Naples) was not under direct Roman rule at this point and was a Greek speaking city, indeed, the legend on the coin itself is in Greek, despite making reference the Romans.

Neapolis was a fairly old city by this point, as there is evidence to suggest settlement in the Naples region as early as the first millennium BC, forming part of the great migration of Greeks from their heartlands in the east to southern Italy (Magna Graecia), Sicily and further afield in the western Mediterranean. Amongst other things, it is likely that it was the Greeks who first introduced true ‘coinage’ into Italy, in line with the discovery of coin hoards dating back to the sixth century in southern Italy. Therefore it is not surprising that the first example of coinage relating to Rome should have been discovered in a southern, Greek city. But why does the coin say ΡΩΜΑΙΩΝ ((coin) of the Romans)?

By the late fourth century BC, Rome was expanding its political reach down towards the southern end of the Italian peninsula. It was engaged in a series of wars with another Italic people, the Samnites of the south-central spine of Italy, and in this conflict many of the Greek cities of southern Italy were effectively forced to pick a side. The region of Campania, in which Neapolis was located, fell between the Romans and the Samnites and thus turned into a battleground between them. According to Livy, after a power struggle between the pro and anti-Roman factions within Neapolis, the city opened its doors to the Romans and signed a pact of alliance, the Foedus Aequissimum, with them. This is dated to around 326 BC, as the second Samnite war was getting under way, and this has also been taken as the earliest likely date for the coin being struck. It is thus possible that the use of ΡΩΜΑΙΩΝ on the coin was meant to publicise the Roman alliance to the general population, but that still does not explain the immediate reason for the coin being struck.

At this point it should be noted that the production of coinage in ancient states was generally not regularised to the same degree as in modern states. Whilst coins and notes are the predominant representation of physical wealth (and a key means of exchange) in the modern world, this was not the case in antiquity, where wealth might just as easily be represented by precious metals or even cattle; indeed it is interesting to note the similarity of the Latin term for money, pecunia, with the Indo-European root word for cattle, peku. Similarly, minted coinage was not necessarily needed for the purposes of exchange either. The Romans themselves appear to have gotten by without using minted coinage at all up until the third century BC, with small transactions seemingly conducted via the use of so called aes grave, literally rough bronze, nuggets of metal that were not shaped or minted in any fashion. Whilst in the modern world the intense quantity and velocity of financial transactions make it an imperative for central banks and mints to constantly replenish the physical money supply on a regularised basis in order to ensure liquidity, this was less the case in the ancient world where there were generally far fewer financial transactions and where the maintenance of ‘liquidity’ was not a concern of the issuers of money. Therefore, issues of ‘authorised’ coinage by cities tended to be made with a specific ‘goal’ in mind, such as to pay for public works or military campaigns, rather than to provide an easy means of conducting small scale private commerce.

The latter of these two examples provides a strong rationale for why this coin may have been minted. Given the new alliance with the Romans, Neapolis would have entered the war against the Samnites, which meant that the city would have had to pay to raise both troops and ships (for the treaty with Rome stipulated the provision of ships, naval warfare being a Roman weakness at this point) for the duration of the war. Coins represent an easy way of remunerating soldiers and sailors, as it relieves a state of the obligation to provide directly for them; if a soldier or sailor receives his dues in coins, he can use that new found wealth to pay for his own food, drink and other sundry expenses, as opposed to having that supplied by the state. Wars, in the ancient and modern eras, are often associated with large expansions of the money supply so as to pay for armies - the severe collapse of the value of Roman coinage during the ‘Crisis of the Third Century AD’ has been associated with large scale minting by various aspirants for the imperial throne in order to win and maintain the support of the soldiery. To return to Neapolis, minting this and other coins provided the city with a means to fund its obligation to the Roman alliance, which seems a sensible explanation for the profusion of Neapolitan coinage towards the end of the third century, a period of prolonged warfare in southern Italy.

This idea in turn provides an interesting link to the Roman ‘adoption’ of coinage in the third century. As Rome grew to be major power in the Italian peninsula and beyond, the amount of warfare that it engaged in inevitably increased; conflict with the Samnites in the fourth century would be followed by wars with Pyrrhus of Epirus and Carthage in the third century, wars that necessitated long military campaigns. Given that (even prior to the full professionalization of the military under Marius), the Roman state provided a stipendium to its troops, the amount paid out as part of this would likely have increased immeasurably during the long years of war in the third century, which perhaps explains why the Romans finally adopted coinage wholesale, as a utile means of providing the stipendium.

Returning to the coin itself, aside from the legend on it, the imagery is largely traditional and displays continuity with earlier Neapolitan coin issues. The bull-headed man on the reverse is a staple not just of Neapolitan coinage but of other coins of Magna Graecia, and has often been taken as a reference to the process of synoecism between Greek colonists and local Italic peoples, the bull being a traditionally Italic symbol (one later used on the coinage of Rome’s rebellious Italian allies during the Social War). On the obverse there is a depiction of the god Apollo, whom we are told by later poet Statius was among the patron gods of Neapolis, so again this is not a hugely surprising piece of imagery. It could thus be argued that the coin is representative of a fulcrum point in the history of Magna Graecia; Greek language and traditional Greek and Graeco-Italic symbolism remains on the coin, but the reference to the Romans is a clear sign of the region’s gradual absorption into the Roman sphere of influence and thus foreshadows the profound social changes that would affect both the Greek cities of the south and Rome itself in the coming century.

This month’s entry was written by Ieuan Luke. Ieuan graduated from Warwick in 2017 and went off to train to be a chartered accountant. He still is still interested in the ancient world, focusing primarily on ancient economies and the reception of antiquity in Europe and Russia.