On the 12th December 2019, Sense about Science and Nature hosted the John Maddox Prize, an award recognising scientists that stand up for evidence and scientific vigour in the face of adversity, misinformation and criticism. I attended the evening at the Wellcome Collection in London as a member of the Voice of Young Science (VoYS) network, a vocal and dynamic group of early career researchers who are committed to addressing public misconceptions of science by speaking to journalists, policy makers and the public to stand up for and provide evidence on key issues.

As an intern for Sense about Science during my first year of the MIBTP Doctoral Training Program, I was keen to stay in touch with the team, and to find out more about the John Maddox Prize. The prize commemorates Sir John Maddox, former editor of Nature, a founding trustee of Sense about Science, and a relentless communicator and defender of scientific process. In his memory, the award is given to those working on issues where the available science is the inconvenient truth.

Awarded to two individuals each year, one to a person at an early stage in their career; the prize highlights vital work going on around the world to face up to those who dismiss, reject or deliberately suppress evidence. Prof. Bambang Hero Saharjo of Indonesia was awarded the prize this year for fighting relentlessly through major court cases and harassment to deliver evidence on the initiation of peatland fires, often by palm oil companies, and the risks these pose to the Indonesian population and to greenhouse gas emissions. During his speech, Prof. Saharjo spoke of what the award meant to him and how the support of his ‘new friends in London’ will help him continue to fight for scientific evidence in the face of corporate lobbyists. Particularly pertinent in the age of climate denial and environmental destruction for profit, for me it was a hopeful moment, and a chance to be reassured that there are experts out there continually fighting to get evidence heard and used to inform policy decisions.

The Early Career award was given to Olivier Bernard, from Quebec, who spoke out against alternative health proponents lobbying the government about the supposed benefits of Vitamin C injections for cancer patients. When he described the current scientific evidence showing no basis for the claims, he faced huge backlash from these groups, with them revealing the pharmacy at which he worked, sending complaints to his employers as well as threatening him and his family.

Olivier’s story has stuck with me as a show of true courage- especially for someone early in their career. As young scientists, it can be particularly daunting to face such a challenge, without the years of experience, reputation, and solid networks older researchers may benefit from. Olivier also showed that sometimes it can be an isolating process to go through this experience, and spoke about times when he felt that his safety, and that of his wife, were at risk.

The prize visibly meant a lot to the winners, an acknowledgment from the scientific community of the bravery and persistence they have shown. As it should for all those who were nominated. Each year Sense about Science and Nature receive more and more nominations from further and further afield. This shows a continuing struggle for researchers internationally to be heard on key topics. It also demonstrates that the backlash and struggle they face to debunk and counter false claims, misconceptions and suppression of evidence continue to be a massive hurdle to evidence-backed policy and public thought.

I would recommend young researchers, no matter what your background, to get involved with organisations such as VoYS and Sense About Science. For me, the experiences offered to PhDs who are willing to extend their boundaries outside of their home institutions can be invaluable. Helping to meet and greet guests, and having the chance to network with some of the UKs top journalists, publishers, researchers and policy makers was a fantastic opportunity for a PhD student. It’s also chance to connect with other young researchers, glean career advice and see the many different avenues they have taken through both public-facing roles and academia. Oh, and there’s always a chance to decompress and catch up at the pub afterwards!

If you’re interested in joining the VoYS network and connecting with other young researchers who can can provide the kind of support, advice and new ideas on how to communicate you research, or help debunk false claims you may come across in your career, visit their website for more information. I’d like to thank the Sense about Science team for having me on board, and for the other VoYS volunteers for making this such a fun and informative evening! 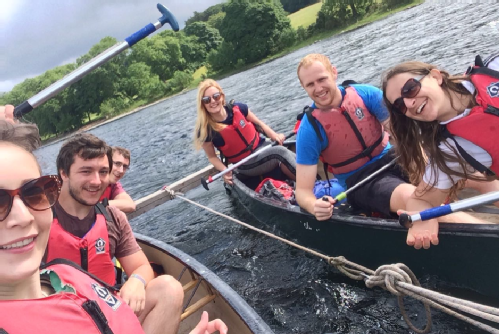 As part of the MIBTP doctoral training programme we are fortunate to have access to the University of Birmingham’s activity centre in the Lake District; the Raymond Priestly Centre. It is perfectly located on the western shore of Coniston Water surrounded by stunning views of the lake and mountains which look beautiful, even in the rain!

For many people, the idea of “team building activities” during a PhD may seem a waste of time. I have to admit that the thought of taking 5 days out of my research schedule to play in a canoe or climb some ropes did not fill me with joy as we set off up the M6 in the middle of June. However, I could not have enjoyed my time at the Raymond Priestly Centre more!

Everyone in my group seemed a little sceptical at first, being instructed to build a bridge over a marshy pit or canoeing across a lake weren’t tasks we thought we would need to do while completing a PhD! However, we dived into the tasks in good spirits laying planks of wood, shuffling across platforms, lifting each other through small space between strings, building rafts. Little did we know that so much learning could be obtained from such fun activities. We started each task with little planning initially and consequently little success! However, with guidance from the delightful team leaders from the Centre, we realised the importance of collaborating our ideas and deciding upon the best way to complete the activity.

Throughout the week at the centre there were reflective discussion about how we had completed the tasks (if indeed we had managed to!) and on the groups teamwork each day. Again, if I’m honest, I was sighing at the words “reflective activity” written into the timetable for each day at the centre, however it is a lot more beneficial than you would first expect. Looking back at how you tackled each task at the end of an activity, with the leaders instigating a thought process on what could be improved and what went well, provided useful feedback to enhance our team-working skills each day. Eventually we established roles for each of our group members based upon each other’s strengths. It was clear to see how we all developed over the week when you compare our epic failures of plunging into marsh pits and capsizing canoes initially, due to rushing into activities without proper planning at the start of the week, to our team navigating across the lake and mountains of Coniston on the last day successfully collecting many points for Project X. The way our group transitioned from many individuals, each with good ideas and skills to offer, into a prosperous team was as a result of our group reflection and feedback session.

Teamwork, feedback and reflection are all skills that are important in the lab setting and throughout a PhD. With each experiment conducted, a plan needs to be established from start to finish and often made in collaboration with supervisors or other lab members. Utilising people’s skills and strengths and working together with your lab group is important to help you learn and develop into a successful researcher. Being able to work well in a team during your PhD is incredibly beneficial, although, if your experimental results don’t turn out exactly as planned at least you don’t end up in a cold lake or covered in mud!

My time at Coniston gave me the opportunity to get to know my MIBTP colleagues more and have a great time in the Lake District. But more than simply this, it offered me the chance to reflect on my PhD and myself as a researcher. I had never really stopped to consider what I was doing well or what I needed to work on and plan how to tackle any issues I identified. While at the Raymond Priestly Centre I learnt a lot about myself, but also had an incredible time in an amazing setting. I was completely converted from a cynic of teambuilding events to wishing I could go again next year! I hope you can enjoy your time in Coniston as much as I did!