Today is the seventieth anniversary of Japan's surrender in 1945, marking the end of World War II. It seems timely to give some thought to the impact of Japan's war on China. Where does World War II rank in the disasters that befell China in the twentieth century?

Japan attacked China twice, the first time in 1931 by occupying Manchuria (the modern provinces of Heilongjian, Jilin, and Liaoning), the second time in 1937 by launching all-out war to conquer China and turn the whole country into a Japanese colony. For this reason, 1937 is usually taken as the outbreak of World War II in Asia.

In 1946 China's Nationalists estimated China's war deaths from 1937 to 1945 at 12.8 million (the figure is given by Sally Paine, The Wars for Asia, Cambridge University Press 2012, p. 214). Since China's total population was around 500 million at that time, the loss was enough to slow the population's natural increase, although not to reverse it.

Once World War II was over, most economies recovered quickly. That's roughly what you'd expect when war demands are relaxed, peacetime social norms and legal guarantees are restored, and trade is allowed to recover. China's postwar recovery could not begin until 1949. In the 1950s China's economic recovery was rapid at first.

In 1958, however, China's Communist Party led by Mao Zedong accelerated national economic mobilization into a vast "Great Leap Forward," which forced the farmers into people's communes and set out to industrialize the country overnight. The outcome was a famine that, according to Yang Jisheng's Tombstone (Allen Lane 2012: chapter 11), killed around 36 million people in three years. Losing 12 million people a year for three years was more than enough to offset the population's natural increase, causing the population to decline absolutely.

So there it is. World War II cost China around 12.8 million lives over eight years -- between one fifth and one quarter of all premature deaths in the war worldwide. This was a shocking outcome and a terrible tragedy. But compared with the Great Leap Forward, which took 36 million lives in 3 years, it is not even close.

In every year between 1959 and 1961 China lost as many people as in all the years of World War II. The famine caused by its own government in peacetime was worse than the war against Japan.

Alternatives to Capitalism: When Dream Turned to Nightmare

On Friday evening I found myself debating "Socialism vs Capitalism: The future of economic systems" at the Peking Conference of the Warwick China Public Affairs and Social Service Society. The organizers also invited my colleagues Sayantan Ghosal, Omer Moav, and Michael McMahon, who spoke eloquently. The element of debate was not too prominent because we all said similar things in different ways. I'm an economic historian and the great advantage of history is that it gives you hindsight. Anyway, here is what I said:

Let’s start from some history. There was a time between the two world wars when the capitalist democracies, like America, Britain, France, and Germany, were in a lot of trouble. In 1929 a huge financial crisis began in the United States and went global. There was a Great Depression. Around the world, many tens of millions of farmers were ruined. Tens of millions of workers lost their jobs.

Another answer many of the same people came up with was: Democracy is the problem. Lots of people decided: the problem is too much politics! We need a strong ruler to stop the squabbling! Someone who can make decisions for the nation! Someone who can organize us to build a common future together!

So there was a search for alternatives to capitalism. Different countries tried different alternatives. The alternatives they tried included national socialism (or fascism) and communism under various dictators, like Hitler and Stalin.

What happened next? On average the dictators’ economies did recover from the Depression faster than the capitalist democracies.

(Here's a chart I made earlier to illustrate the point, but I did not have the opportunity to use it in my talk. Reading from the bottom, the democracies are the USA, France, and the UK; the dictatorships are Italy, Germany, Japan, and the USSR. You can see that Italy does not conform to the rule that the dictators' economies recovered faster. Without Italy, the average economic performance of the dictatorships would have looked even better.) But solving one problem led to another. Before the 1930s were over the dictators’ policies had already caused millions of deaths. A Japanese invasion killed millions in China (I'm not sure how many). An Italian invasion killed 300,000 in North Africa. Soviet economic policies caused 5 to 6 million hunger deaths in their own country and Stalin had a million more executed.

After the war, capitalism recovered. In fact, far from being a problem, it became the solution. By the 1960s all the lost growth had been made up. Think of the economic losses from two World Wars and the Great Depression. If all you knew about capitalist growth was 1870 to 1914 and 1960 onwards, you’d never know two World Wars and the Great Depression happened in between.

(To illustrate that point, here's another chart I made earlier, but did not use. It averages the economic performance of Australia, Austria, Belgium, Canada, Denmark, Finland, France, Germany, Italy, Netherlands, New Zealand, Norway, Sweden, Switzerland, the UK, and the USA.) 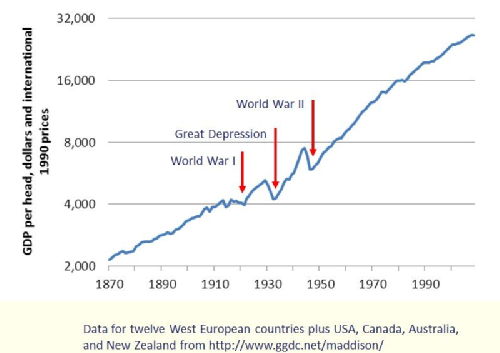 After World War II fascism and national socialism fell into disrepute, but communism carried on. In China, Mao Zedong’s economic policies caused more deaths. In 1958 to 1962, 15 to 40 million people starved. Communist rule led China into thirty years of stagnation and turmoil. After that Deng Xiaoping made the communist party get its act together. And the communists forgave themselves for their past and agreed to forget about it.

Liberal capitalism isn’t perfect, but it has done far more for human welfare than communism. It has been the solution more often than the problem. Last time capitalism experienced some difficulties, many countries went off on a search for alternatives. That search for alternatives led nowhere. It wasn’t just unproductive. It was a terrible mistake that cost many tens of millions of lives. Lots of people have forgotten this history. Now is a good time to remember it.

Postscript. At one point I thought of calling this blog "Alternatives to capitalism: the search for a red herring" (a "red herring" is something that doesn't exist but people look for it anyway.) But I realized that would have been wrong, because alternatives to capitalism have actually existed. The problem with the alternatives is not that we cannot find them. It is that the people who went searching for them fell into a dream and woke up to a nightmare.