I'm taking this chance to think back to my internship in prepartion for my upcoming one working on the Warwick team for the international Genetically Engineered Machine competition (iGEM). Over the holidays after first year (from July to September 2019), I had the wonderful opportunity to undergo a neuroscience research internship at the Claridge-Chang Lab, a joint lab with A*STAR’s Institute of Molecular and Cell Biology and Duke-NUS Medical School.

During my time in the lab, I mainly assisted the postdoc researchers with neuroanatomy - which in a nutshell involves genetically crossing fruit flies, running experiments with them, before knocking them out with ice and then dissecting them.

Prepare yourselves for some overexcited biology talk...

In order to do any experiments on fruit flies, we have to breed them first. The flies are bred according to your experimental purposes - there's plenty of variety that can occur in the little things! Genetic crosses are made by selecting parents with specific traits/genes that you want in your experimental fly, and this takes loads of planning and sorting of the flies. First you have to separate your 2 parental breeds and separate them by sex. In order for the experiment to be reliable we can only change one variable at a time, so one of the parents must be the "generic" type, usually UAS-Stinger in this lab. The UAS flies have genetic sequences that drive expression of GFPs or green florescent proteins (more on this later).

There's also lots of trial and error involved. Sometimes the flies simply refuse to breed, or the larvae die before hatching into adults. Due to their tiny size, there's also the chance that while you were creating the crosses and physically sweeping a certain number of male and female flies into the tubes they're stored in, a stray fly that escape from another tube may have ended up in your cross and will therefore totally skew the phenotypes and genotype of your offspring. Such is the nature of Biology though, so you eventually learn to make multiple sets of the same cross as well as to keep live and healthy backups of your different flies so that such setbacks don't affect your work too much. 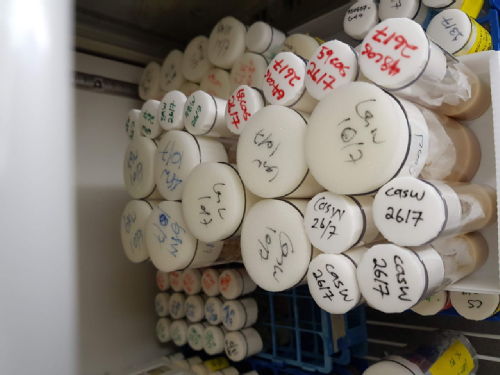 The tissue paper that's visible in some of the tubes is provided as extra surface area for breeding and growth, while the light brown stuff at the bottom of the tube is the fly food.

So you've succesfully bred your flies... now what?

Insert carbon dioxide into tube via a needle-like tube to anaesthetise them, dump them out onto a carbon dioxide-diffusing surface, and use a paintbrush to sort through them again. This is to check whether the offspring are of the correct breed by observing their physical (phenotypic) characteristics, such as the number of hairs on their "shoulders," whether the wings are straight or curled, or eye colour. 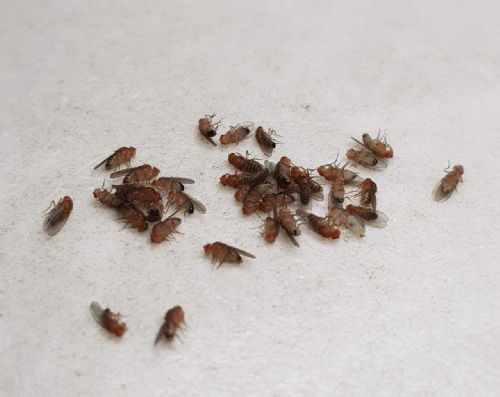 Additionally, marvel at how gross and somehow still weirdly cute they are?

Once I was satisfied with the crosses I needed, the postdocs would use these flies and run behavioural tests. My main mentor in the lab was studying the neural circuits behind foraging and feeding behaviour, so these tests were usually food related. For example, putting the flies we were studying in an arena of sorts, with a choice of two different sugary food sources. A camera setup and computer program is then used to record the flies and count how many times they fed on either food source, and this data would be subject to calculations and statistcal analysis afterwards. 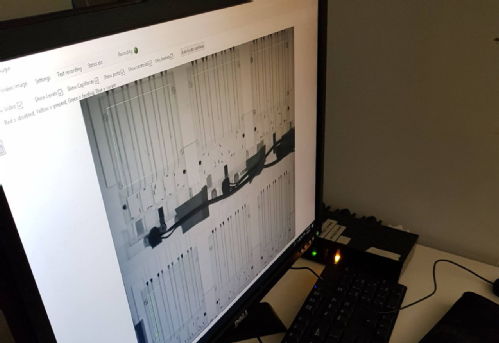 Once a certain behaviour was observed and identified, we then embarked on searching for whether there was any consistent neuronal basis, which is where the neuroanatomy comes in.

Under some pretty powerful microscopes, I used forceps to slowly peel away exoskeleton and other tissue of Drosophila melanogaster fruit flies, leaving their brains and ventral nerve cords, their version of a spinal cord. 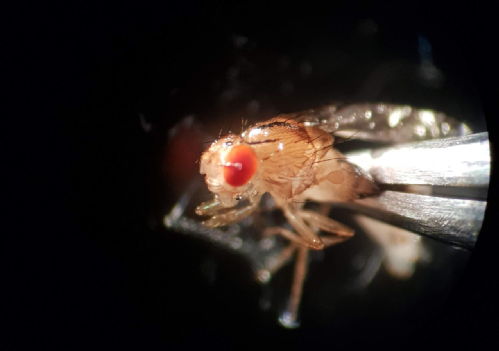 Close up of the humble fruit fly under my microscope. Words almost cannot describe how useful they are in scientific research, from cell biology to neuroscience to even NASA's space missions. 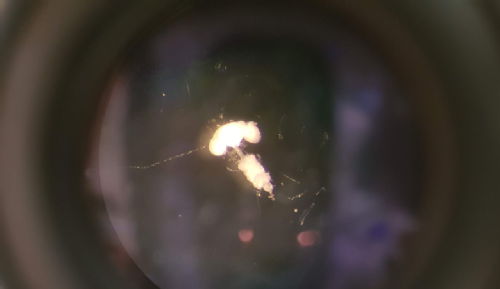 One of my dissected brain and ventral nerve cords (VNC). It took about 2 weeks of all-day practice with me hunched over a microscope trying to dissect such tiny and fragile structures. 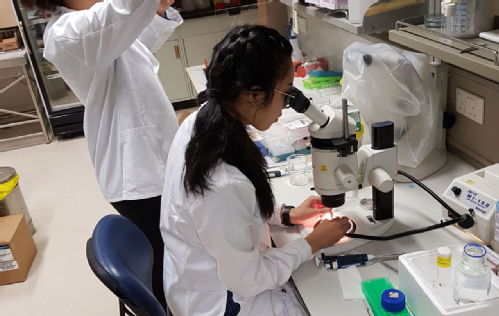 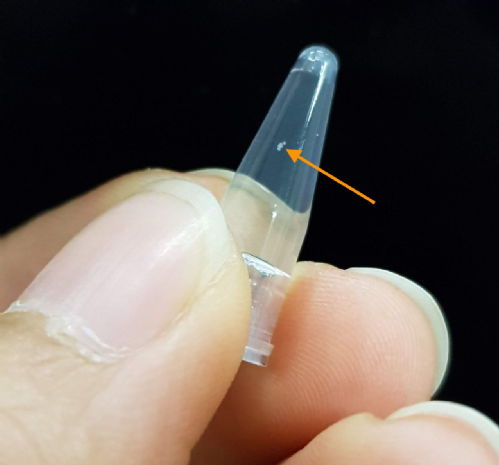 For a size reference at the real-life scale, the fly brain is that tiny white dot inside the Eppendorf tube!

After dissection of the brains, they are then subjected to washing in various chemicals as well as a formaldehyde mixture for preservation. They are then stained with various antibodies in a processed called immunohistochemistry protocols. I won't go into too much detail about how this works as that would take ages, but basically if a certain brain chemical (serotonin and dopamine are two relatively well-known ones that I worked on) is present in these brains, the antibodies will stain the cells that have this chemical. They will then fluoresce, thus the name of Fluorescent Proteins, when viewed under a scanning confocal laser microscope. As such when you are looking for the presence of a certain chemical that you suspect is correlated to the behaviour of the fly, you can use these antibodies to test whether they're there by staining them and seeing if the areas that glow are present where you expect them to be.

The confocal microscope also does a 3 dimensional scan of the brains, by taking z-axis slices across the height of the brain after you measure and input said height. 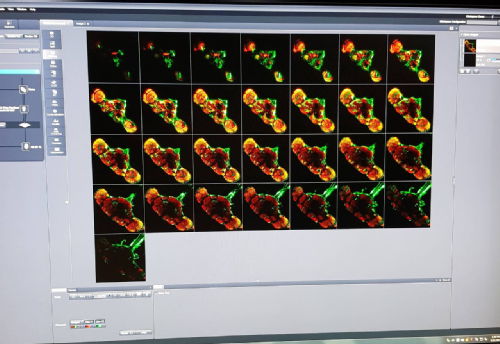 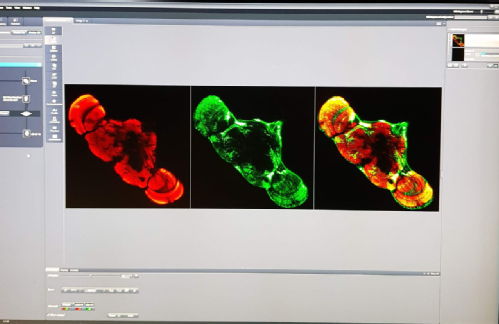 I had an absolute blast during the entire internship, as hands-on experience is truly something that words and pictures just can't do justice to. The scientists who work full-time in the lab were incredibly helpful! My mentor was not only approachable and an amazing teacher but also really cared about my experience and development as a temporary "researcher." She always gave me space and freedom to experiment and learn on my own instead of just giving me a long list of instructions or menial tasks. The other interns in the lab were also so fun to hang out with. We had meals together pretty much every single day and I personally found it really helpful to bounce off ideas and troubleshooting tips with each other during our breaks. Everybody, even the Principal Investigator (i.e. the head of the lab, an accomplished scientist and an Assistant Professor at Duke-NUS Medical School) was so open about the workings of his lab with us interns, letting us sit in on official lab meetings, seminars hosted by A*STAR, as well as having us go for lunch breaks as an entire lab every week to have honest discussions about the scientific and non-scientific aspects of a research career.

For all this I am incredibly grateful to all the people at the ACC Lab. The things I learned during this internship are incredibly valuable to me, especially since "working" in a lab is so different from being in university labs. The entire experience is one that I will look back on fondly for the rest of my life, and will never forget. 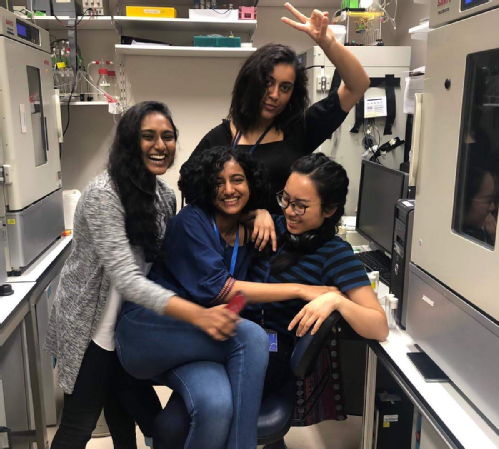