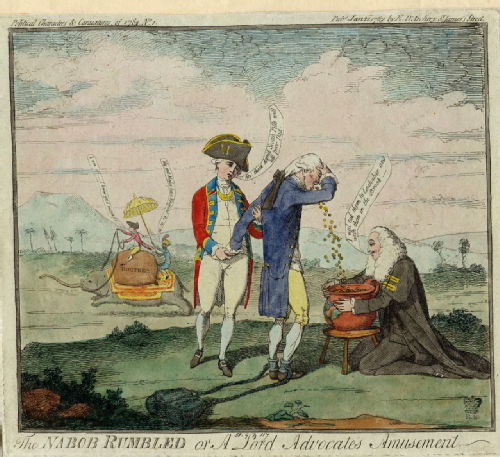 ‘Placemen’ were the bogeymen of seventeenth and eighteenth century ‘patriots’ who feared that the public good was being sacrificed to the unprincipled ambitions of corrupting Crown ministers and their lackeys. ‘Placemen’ were those who were given rewarding posts in government or sinecures as a means of buying their compliance and support, or merely as a way of rewarding those who were politically loyal or boosting the incomes of the social elite. As the resources of the British state grew in the eighteenth century, so did worries that a rich, parasitical elite was ‘placing’ cronies in every lucrative job so that they would unthinkingly do the government’s bidding whilst also siphoning off public money and diverting it into private hands. ‘Placemen’ were corrupt and corrupting, particularly if they sat in Parliament. As the eighteenth century wore on, and especially in the early nineteenth century, placemen and sinecurists were seen – especially by radicals - as part of a corrupt system of governance in need of fundamental overhaul. John Wade, for example, compiled a long list of placemen and sinecurists, together with their salaries and payments, in The Black Book or Corruption Unmasked! It attacked ‘a legalized system of pillage, fraud, and delusion’, of ‘connexion and influence’, which relied on corruption as an essential prop of government. It was a publishing sensation with fifty thousand copies of its first edition in 1828 being sold, and three further editions. 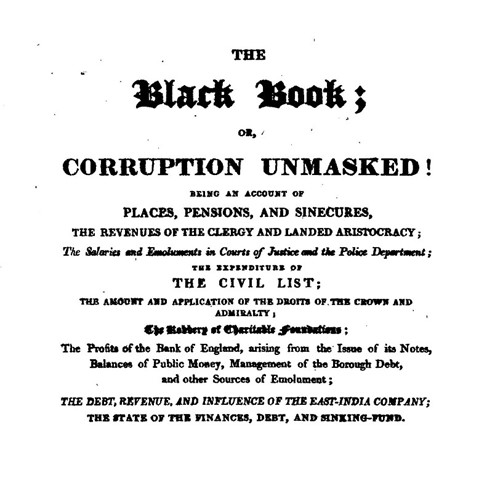 The pre-modern view about the corruption of placemen owed much to anxieties about an evolving imperial state but also to an immersion in ‘classical republicanism’ – the legacy from the classical world that emphasised the danger of the corruption of the constitution and of liberty itself. The corruption that Britons used to worry about most – once anxieties about the corruption of religion began to subside - was the corruption of the constitution by an overmighty executive that abused its patronage power to create undue ‘influence’ and oligarchical patronage. Instead, the public were urged to support those who were truly independent of the executive and hence disinterested, impartial voices who would seek the public good rather than partisan advantage. Voters, a 1658 tract warned, should avoid ‘those who in a selfish ambitious manner, seek and hunt after the imployment [sic], and use unlawful and indirect means to attain thereunto. The unfittest and unworthiest men are commonly the most forward to sue for Place and Offices’. Only the truly independent should be chosen, for ‘Ingaged men commonly have their eyes, ears and tongues in their heads, and at the dispose and command of others; their corrupt and carnal dependences and compliances choak their affections to the Publick-interest’.

Reformers saw placemen as part of an interconnected system of corruption: a corrupted electoral system, oppressive tax system, a system of militarism that required excessive taxation, and a corrupted financial system that made it all possible and benefited the placemen and cronies who staffed the political and social hierarchy. 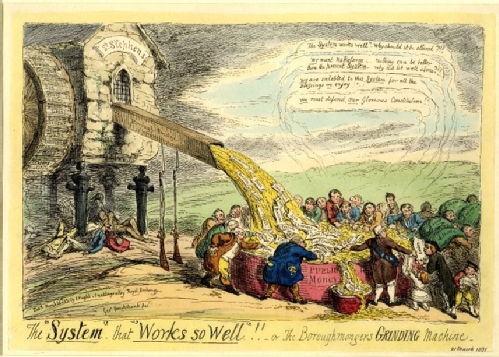 ‘The “System” that “Works so Well”!!’ (1831), BM Sat. 16610. The electoral ‘system’ is seen as corrupt, enabling public money to be poured into the pockets of ‘borough-mongers’ – those who bought their way into the representative system. Some of the coins are labelled 'Places', 'Livings', and 'Civil Offices'. Copyright Trustees of the British Museum.

Is twenty-first century Britain sliding back into an eighteenth-century-type world? Over £10 billion worth of covid-related contracts have been given out without competitive tendering, many to friends and associates of ministers. Dido Harding was appointed as Chair of the NHS Test and Trace without competition: she is a sitting Conservative Peer, wife of a Conservative MP and friend of former Prime Minister David Cameron. Richard Sharp, the new chairman of the BBC, is a Tory party donor and close friend of Rishi Sunak. Peter Riddell, the out-going independent commissioner for public appointments, wrote last November that “some at the centre of government want not only to have the final say but to tilt the competition system in their favour to appoint their allies” [Peter_Riddell_to_Lord_Evans.docx.pdf (publishing.service.gov.uk)]. Riddell warned that appointment panels were being packed in order to ensure that those ‘allies’ got jobs. The previous blog noted the cronyism apparent in government procurement; and the Cameron-Greensill scandal is another manifestation of it. Patronage, a willingness to do the government’s bidding and a record of total loyalty to the Tory party – these champions of free speech don’t want to hear a whisper of criticism! - seem to be the order of the day.

The system works so well!