Gordon Brown has recently warned about Boris Johnson’s plan to use a 'resignation' honours list to fill the House of Lords with perhaps as many as 50 supporters, and offer bribes to reward the lackies for towing the Tory line. A petition against this has 60,000 signatures and counting.

The possibly imminent abuse of prime ministerial power nevertheless has precedent. Over the New Year of 1711-1712 another Tory prime minister from the early eighteenth century, Robert Harley, created a dozen peers to gain a majority in the Lords. They were needed in order to push through a controversial bill to end a long-running war with France and to enact a new commercial relationship with it, measures opposed by the Whig majority in the House. ‘Harley’s Dozen’ included his son-in-law, his cousin’s husband, and a tribe of close associates. Even the earl of Dartmouth, who signed the warrants, warned the Queen about the dangers of such an ‘odious’ policy. A legal opinion was reported to the Queen that the creations were ‘not to reward Merit… but to make Votes and Numbers’, and amounted to a ‘Violation of the Freedom of Parliaments’. 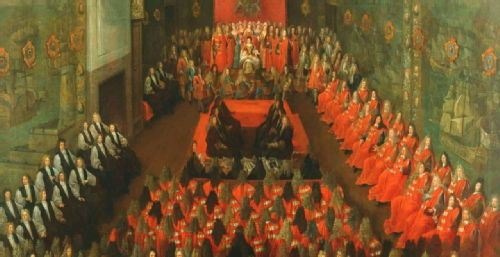 Peter Tillemans, Queen Anne in the House of Lords. Royal Collection on loan to Parliament.

So it might be an interesting warning from history that the abuse of power formed part of the articles of impeachment that were subsequently presented against the prime minister, after his fall from power, when Parliament prosecuted him in 1715 for treason and other ‘high crimes and misdemeanours’. Article 16 alleged that Harley (now Earl of Oxford) had ‘used his utmost Endeavours to subvert the ancient established Constitution of Parliaments’, and ‘in violation of the great Trust reposed in him’, to advise the Queen to create twelve peers ‘in the most dangerous and most unprecedented manner’. The earl spent two years in prison, though he was subsequently acquitted, a beneficiary of divisions within the government that had ramifications that are now worth outlining.

The 1711 act of Tory gerrymandering was remembered and in 1719 a Whig government attempted to introduce a Peerage Bill that would have ended the Crown’s prerogative over the creation of peerages and have permanently left the upper House with only 209 peers. The bill sparked a debate about the purpose of the Lords and the right number of peers. The government argued that too many peers distorted the balance of the constitution; opponents argued that limiting the number also violated the constitution. The debate split long-time writing partners, Richard Steele and Joseph Addison, who now took up pens on opposing sides. A pamphlet war ensued, with much ink spilt on both sides, some of which reflected growing concerns about unsuitable people buying or inveigling their way into the peerage. But the bill eventually foundered because of splits within Whig ranks. The Whig faction in power, led by the earls of Sunderland and Stanhope, had feared losing control of the Lords; for them, the bill created some new sympathetic peers at the same time as preventing any loosening of their grip. The bill was successfully opposed – twice - by another Whig group led by Sir Robert Walpole, who argued on the floor of the Commons that the bill would shut the gate to any aspiration.

Of course, having been defeated, the way was open to subsequent administrations to repeat Harley’s coup. Between 1776 and 1830 the Lords almost doubled in size, from 199 to 358; and by the early twentieth century peerages were being sold for party or personal profit, with Lloyd George creating 91 peerages between 1916 and 1922, for sale or given away to buy favours. As a result, the Political Honours Scrutiny Committee was created in 1923 to scrutinise those nominated for an honour. In 2000 this was replaced by the House of Lords Appointments Committee. But bizarrely the prime minister still has the power to make appointments. It seems the twenty first century is still stuck in the eighteenth.