Last week was the annual USS Institutions Meeting, an opportunity for employers to be updated about the state of the pension scheme.

I attended as an elected member-nominated rep on the Advisory Committee (part of the formal USS governance structure). Attendees were invited to submit a question. I was disappointed that mine was not addressed but instead a heavily edited version substituted - and even that was not fully answered. My question was addressed to the chief executive, Bill Galvin, but the substitute question was answered by the actuary.

At bottom the issue facing the USS and the focus of the dispute is intellectual: a matter of methodology. A pension scheme must have sufficient funding to cover its liabilities when they fail due to be paid. That is obvious but there are different ways of assessing a scheme's ability to fund its pension payments over the years. However the law only requires the trustees to report on one of them, the Statutory Funding Objective, which requires the assets must be at least equal to the actuarial valuation of the liabilities known as the technical provisions, otherwise there is a deficit that must be filled by a recovery plan.

The actuarial profession is not united that this method - valuation - is necessarily the right approach and that it may be problematic. Many actuaries instead advocate projecting the flow of income - from both contributions and investments - to see if it will cover the flow of future benefits. I wanted to cite an important reference critiquing the valuation method: the paper by Simon Carne, which shows that the projection method is perfectly rigorous.

I wanted to show that it makes perfect sense to use both methods to get a rounded view. And Bill Galvin had previously accepted the point when I had asked a similar question two years ago. But it was evident that the the USS executive and the board are committed to one and only one valuation.

Here is my question:

The USS seems to be wedded to a single approach to funding via valuation, using ideas from financial economics. But that is not the only one. Another, equally valid method is available: the budgeting approach traditionally used by actuaries based on projected income and outgo. Simon Carne, in his seminal paper “Being Actuarial with the Truth”, showed this method to be perfectly rigorous and most of the claims of financial economists against it to be false. For a scheme with a strong covenant like the USS it has the advantage of avoiding the use of volatile asset prices and problematic discount rates. It answers the question: by how much is the pension fund in surplus or deficit on the premise that the existing investment strategy is maintained, with all future reinvestment following the current investment strategy? It would be useful for the USS to know the answer to that question, in addition to the valuation. This method - which does not depend on discount rates driven down by the artificialities of the government’s quantitative easing policy, nor the market risk introduced by excessive asset price volatility - has been advocated by First Actuarial and applied to many schemes, including USS, showing only small deficits or surpluses. At this meeting two years ago I asked if you would use this approach as a supplement to the statutory valuation. Bill Galvin replied: “Triangulation of different approaches is very much part of our first principles approach, with the use of a number of different lenses rather than a single lens; then we are very open to that as well.” Can I please ask that you report the results of using this approach to determine the level of funding?”

Here is the question that was put to the scheme actuary, who was easily able to dismiss the suggestion of an alternative approach. It did not seem from his answer that he had seen the original question. 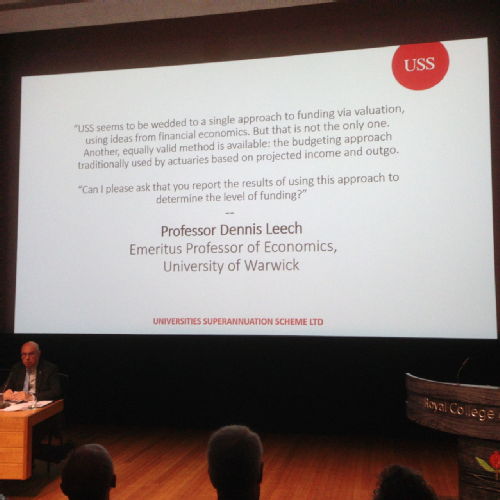 This illustrates a great weakness of the current management of the USS: that it fails to engage with the intellectual arguments surrounding pensions. Since the USS is the pension scheme for universities, it might be expected that the trustees, most of whom are academics, would be keenly interested in the arguments about actuarial practice and financial economics that have been going on for over twenty years, in order to try to get a better understanding. But no, they seem to want to manage the scheme as if there is nothing to question about the methodology, and their job consists in little more than unthinkingly applying the rules designed essentially for small commercial companies. It is unfortunate that academics and others who are thinking about these crucial methodological questions are not being taken seriously by the management. It is hard to avoid the conclusion that the USS has become a scheme FOR universities rather than a true university scheme.