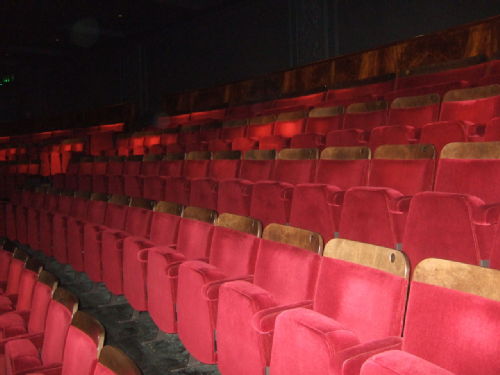 Even before the British government finally closed down public spaces last Friday in response to the global pandemic, many theatres and galleries were doing the responsible thing. The previous Monday, the Society of London Theatres had announced that their theatres would temporarily close, and throughout the week, first one independent theatre then another publicised its closure on social media, postponing, curtailing, and cancelling productions that had taken major investment in time and money and had once been somebody’s dream. A poignant post circulated, showing the ‘ghost light’, said to be left lit on stages all over the country, an evocative symbol of the future return of theatre to our nation.

But we were never without access to art and culture. Offerings were announced on social media: the Royal Opera House is streaming opera and ballet for free; The Globe Theatre has opened up its online catalogue of filmed performances; and in the commercial sector, West End production of The Wind in the Willows starring stars Rufus Hound and Gary Wilmot is available to stream at no cost. It is similar in the visual arts and museums, where art (albeit a largely Western canon) has been globalised; you can now take a virtual tour of the Chateau of Versailles, or of the National Gallery of Art in Washington DC; look at some Monet, Cézanne, or Gauguin at the Musée d’Orsay; or take in some Vermeer at the Rijksmuseum, all while preserving not just a safe social distance or complete isolation, but indeed a reduced carbon footprint.

This augmented cultural offer appeared deceptively quickly; certainly a lot faster than it has taken the Prime Minister to present a cogent public health strategy. The larger cultural institutions, with the funds to invest in and experiment with the digital, already had something up their sleeves. Building closures and increasingly limited public movement due to the global pandemic meant lifting paywalls and increasing marketing of existing digital offers, rather than starting from scratch. The online reach and brand recognition of large institutions and the recognisability of their artworks should appeal not only to existing audiences who need their culture fix but can no longer pop out to the gallery, but also to potentially new audiences of the home-schooled and perhaps the newly bored but culturally curious.

This is important to institutions in the context of indefinite closure, as they can continue their remit of public engagement. It might also be asked: when arts venues close and re-open, do their audiences come back? My observation as an erstwhile board member of theatres which have temporarily closed for refurbishment or rebuilding, is, often not. Knowing this risk, some theatres go on tour for the duration, or decant elsewhere, temporarily setting up shop in another space, as the Almeida famously did in 2000, in order to keep their brand alive and their audiences warm. This clearly can’t be done under the current circumstances, making physical closure a long term risk. Being able to engage your audiences and even extend your reach digitally then is a real advantage.

However, it is apparent that it may be an advantage available only to those large cultural institutions that have been well funded or are wealthy enough to have engaged in digital engagement. Smaller theatres and galleries working on smaller margins have not always been able to invest in the same way, and many of the subsidised have struggled to even survive under ‘austerity’ funding. Such organisations don’t necessarily have a back catalogue of digital repertoire they can launch across social media channels or an institutional knowledge of digital creation, and in any case might lack the resource to do this well whilst simultaneously closing down a building and dealing with contracts, cancellations, contingencies, and insurance. Like the weather, a pandemic hits everyone, but the wealthy are always more ready to survive the storm.

Smaller arts organisations are still engaging digitally, of course. But much of what they are doing is less visible, and more local. Many smaller theatres such as Polka Theatre in London and Unity Theatre in Liverpool are using their social channels as a community resource, sharing announcements and information from local government. On the one hand, this is not their usual cultural fare, and may not be enough to keep audiences engaged. More positively though, it might mean that small venues become more relevant to their communities in this time of crisis, and bonds built now will sustain in the future.

But do these small cultural organisations matter? My colleague Heidi Ashton has talked here about the importance of arts and culture both economically and to the sense of who we are. The small scale contributes greatly to this cultural ecosystem, and engages a significant number of the freelancers who, as Ashton points out, are now struggling without government help. Small scale names may be less recognised nationally or internationally, but they often have higher local visibility and importance. Moreover, the small scale often nurtures the start of cultural product life cycles; In the past small scale theatre has nurtured work that has later been commercially exploited like Blood Brothers, or plays have become feature films like Letter to Brezhnev; and of course the small scale can provide a step on the ladder, nurturing writers, cast members and crews who can learn their craft. Importantly for theatre, and for society, the small scale can take formal risks, it can experiment and innovate, and it can offer a dissenting voice.

Without an obvious way to continue to engage its audiences, many small scale venues may struggle to survive. Indeed, we appear to have the first casualty of the Coronavirus shutdown: 30-year-old Square Chapel Arts Centre in Halifax announced this week it was going into administration. The Arts Council of England (ACE) has reacted to the crisis facing cultural organisations by acting swiftly, communicating in exemplary fashion, and releasing an impressive Emergency Response Package. Even applying to this will be a struggle for smaller organisations without dedicated fundraising and development departments. When distributing funds, ACE needs to note the particular circumstances of smaller organisations, already struggling financially and with fewer staff, and continue to invest in the small scale as well as the big names. ACE needs to keep them afloat in the current crisis and to develop their resilience, including their digital capacity, in the future. If, as seems likely, there is a protracted period of closure for cultural organisations due to the pandemic, it is worrying to wonder how many of our small, local, independent theatres will be able to go back and turn the ghost lights out, and put the flood lights back on again.