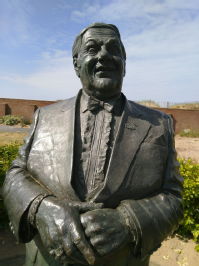 Last year I blogged about my developing research project on Monumentalising Popular Culture. I thought I’d write just to update on progress and developing themes.The project is examining the contemporary phenomenon of statues of comedians, on the assumption that the dedication of such memorials to popular entertainers connects with a number of inter-related issues within Cultural Studies, the sociology of culture and cultural policy making. These include, but aren’t limited to, ‘cultural value’ debates about the ways in which popular culture becomes official or legitimate, the relation between culture, identity and heritage and the role of culture in local and regional development and planning.

One thing I have discovered is that, gratifyingly, there are more such statues than I had originally thought - and thanks to the generosity of the Humanities Research Fund at Warwick I've been able to visit many of them this year. My latest running total is of twenty statues or monuments to 17 comedians (including three statues of Stan Laurel, one of which with his partner Oliver Hardy, two of George Formby and two of Eric Morecambe and Ernie Wise, one of them together). In keeping with the general pattern identified by campaign groups such as Mary on the Green and inVisible Women, these are predominantly statues of men. Gracie Fields in Rochdale is currently the only statue of a woman in this category, with a statue of Victoria Wood due to be unveiled in Bury later this summer. A number of interesting themes are emerging from this work. I’ll just outline two here.

First, fifteen of these statues have been unveiled since the turn of the century. If we add to these similar statues to pop/rock artists, such as to David Bowie, or Amy Winehouse, or AC/DC’s Bon Scott, unveiled in this period, as well as a slightly more established recent history of statues to athletes, we can perhaps identify a growing trend for the commemoration and celebration of figures from twentieth century popular culture. This implies that people from these realms have now joined the category of the ‘memorialisable’, which might previously have been the preserve of political, military, civic or industry leaders or figures from what is traditionally understood as ‘high culture’. Among the many reasons that I think this is interesting is that, while in the past it might have been that choices of who to commemorate were imposed on local populations, contemporary selections seem more likely to have to be justified and negotiated over by residents, enthusiasts, councils and planning authorities. What’s more, in cases such as Frank Sidebottom (alter-ego of Chris Sievey), Ronnie Barker or the soon to be unveiled Victoria Wood, the statues were produced within five years of the deaths of their subjects, implying something of an appetite and enthusiasm for the chance to claim and celebrate such figures and their connections to a town or region through this kind of memorial.

Second, but relatedly, there is something of an uneven spread of the statues geographically, with the majority being located in the north of England, and nine being in the North West (I’ve made a google map of the ones I’ve found you can see here). Analysts such as Andy Medhurst and Mike Featherstone have speculated about the place of comedy in British regional identity, inflected by the more general ‘North-South divide’ and its relation to patterns of economic inequality within the UK. The North has also long been identified as a source of the UK’s most abiding and significant popular culture, even if ‘success’ in such fields has often involved its protoganoists moving away to London or beyond. In examples like George Formby in Wigan (and on the Isle of Man) and Gracie Fields we see the commemoration of figures who, even at the height of their national and international fame (they were the biggest male and female box-office stars of British cinema in the 1930s) were ineluctably associated with their Lancastrian roots. As interesting to me, though, is that the first of this ‘new generation’ of statues– the Eric Morecambe statue in Morecambe on the Lancashire coast- is also in this region. It was a key part of a local strategic investment to revive a tourist destination that had suffered years of relative decline. That so many nearby towns and councils followed this route suggests a degree of entrepreneurialism on the part of local authorities based on the belief that such monuments can both appeal to local pride and attract and enhance the experience of potential visitors. It also suggests the development of an increasingly well-navigated route through local government and planning structures to make such memorials possible.

I’ll be working on plans to develop research into these themes and others – over the summer with a view to speaking to both people who are directly involved in the decision making processes and the making of the statues themselves, and those who live with them. I’ll also be talking about the project at the ICCPR conference in Tallin in August. I’m keen to hear of any more examples, so please do contact me via twitter or in the comments below.