the whisper of heart 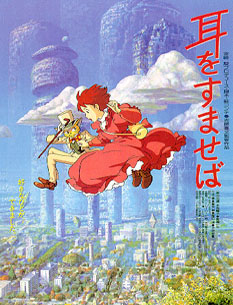 A little romantic story from Studio Ghibli.
We've been told how dangerous the world is for too many times, and become so paranoia. Sometimes, if we have been braver, life can be far more interesting.

Friday, I m not in love

But it's always happy to have a fully scheduled weekend.
Happy birthday to Lou!

Friday's not that great after all. The cure never cured anyone!

Why do I stay up so late again

When I actually did nothing!
I m sleepy, but I dont wanna sleep
There is this film in my mind, very vaguely. I can still remember I cried like crazy after seeing it again in summer. Never made any attempt to see it one more time. Ok, a list of films made me cried, after this, I'll sleep:

and maybe there are other films have actually made me cry, can't come up with all of them now. But amongst all the films I list, I rate Dancer in the Dark as the most tear winning film! Well, most of them are not the major tear wining film, I just cried to them anyway. I think I've done well not have cried in Coen Brothers' films. But my next time burst in tears might be a Peter Greenaway film. Sometimes, when I cry, I probably am showing likeness. I have funny expressions sometimes.

What a pound can bring to you? What kind of adventrue would possibly take place in a three square metres van?
Well, the black maze is a good potential.
Exactly as the door man told us, it's a journey where you can always find a way out even when you think it's a dead corner. This is a journey about 5 minutes walking in the dark. Where you can only feel the way with your hands and feet and your trust/responsibility to your partner, who's the only person with you in there. Very encouraging overall.
If you feel like being in a dead corner in your life, where hardly a decision can be made, try the black maze! There are ways leading you out of the death even you have lost your sight. :)
Reminds me of our journey to Compton Verney actually. That was where we walked a mile to find a bus stop from, and spent another two hours waiting for a bus to a more earthly town. The beautiful landscape and warm hearted local people had really distracted us from being despair when we felt we were probably lost.
Anyway, that's it for today, I m too tired and need some sleep.

The Last Love Poem/ The Time Spent on the River

These two works I present here, though in different forms and done in different times, are generally set in same mood and theme. Both of them were originally written in Chinese. And I have only done the translations till tonight. The English version must be quite lame, but hopefully dynamic. Although both of them are about quite private issues, it is still nice to have people commenting the translations (if possible). Plus I owed the translation of the latter prose for a friend, by putting it in public, I hope he can read it one day :)

The Time Spent on the River
He unfolded his memory on this day, when he recalled walking along the riverside with her. The vast, and dirty river, the muddy footpath along the riverside, the noisy cargo boats which disturbed the dead silence of the river surface, and the old men past them with frequent glances back on such strange couple time by time, consist a vivid picture on his mind. So vivid it is that seems like a dream he had last night.

And she passed the river once again today, where there were bunches of lovers walking along, surprisingly. They were walking on the expensive white-jade-paved path, taking along either their pets or kids with them. Sometimes the neat dressed kids and the lovely dogs were playing with the water in the newly built fountain yard. There were couples of lovers coming only with each other as well, who were sitting together on the chaise longues put on the sand by the river only till recently. While enjoying the breeze, two cups of first picking of green tea are awaited there already. She realized a sailing boat shaped building had taken place of the pavilion where there used to be a lot of aged people dancing and playing chess. The footpath its own, is three times wider than before. The teenagers were flying kites with their parents guidance. Under the sky where all those colorful kites fly, the river no longer stinks. There she could feel the tidy and merry atmosphere blowing on her face.

She recalled the grey winter afternoon then, when they started a close embrace by the riverside. A long lasting and tiring embrace. Therefore they mutually decided to stop and drink some water. It was only after a long distance walked along the long pavilion had they found a corner shop for bottled water. She bought him a pack of local rice cake beside. He didnt like the taste. He told her it was too sweet.

Its true. At the moment, she can feel the vividness of the memory as well.
It seems only because they walked there in a wrong time, that had predicted their impassionate ended love.

—-The Gentle Waves, 'Solace for Pain'
Like the songs sung in the Churches, it releases me a bit from the unreasonable pain I have been undergoing.

Thinking of the ways to ease the pain apart from getting help from friends and being extreme escapicism, I come up with the following:

I think I m paranoid, sometimes. It's a treat to indulge myself that way sometimes. But after all I need to find my track back and see more interesting things in life before I die accidently. Shoulda make effort to fulfill my life journey. And God will love me so much ;)

Bonfire night tonight. I saw beautiful fireworks. Most of the lives in this world are like the fireworks, sparkling in their own ways, but left little trace to track. Cafe Lumiere, the new film of Hou Hsiao-Hsien I saw on Thursday in London film festival, is such film about the trace of lives.

Hou Hsiao-Hsien, following the European realists, always adopts simple characters and plots in his films. Applying long shoots, and diminishing the effect of lights, his films are always very sincere to the routine of life. Since the perspective is so close to the real way of life, we've got a chance to provoke thoughts during the silent moment always beared in real life.

Started concerning in different themes from Millennium Mambo, a film about subculture in Taiwan, Hou sets Cafe Lumiere in a totally different background: Japan. This is a story about a Japanese girl called Yoko, who just came back from Taiwan, independent and having a special concern in a Taiwanese musician Jiang Wenye. The story about Yoko is like a transverse section of her life: there is something going on in her life, but we know that's all about her life. Like her parents, she will think of the problem of living on pension one day. Life flows silently. However, at the moment, Yoko's having important issues in life that would help her to be traced. On one hand, she's pregnant, bearing a new life gives her new potential in life. On the other hand, she's tracing the life of Jiang Wenye, who's seldom accknowledged by anyone. Her friend is doing another interesting project: recording the different sounds in the subway. Both Yoko and her friend's research, in my opinion, are ways of tracing life in general, in another word, immortal lives. City life is distractive, but there are many generalities that tend to be forgotten by most of ppl that maybe memorable. The fact that Hou shoots this film in memory of Ozo is such an instance.

Disappointingly, the director doesn't show up. I always find Hou's film too complicated that I really want to hear what he say about them.