News of the Penguins

So she is married
five syllables to sum up
another milestone

I'm naturally high today again. So I wrote a haiku to celebrate

Originally
because I was so confused
provacatively

Darling, are you coming here to save me from all this business?

This is a film for you, and people like you – who still believe in love – it has even given me some faith in passionate, friendly, and romantic love again. It seems love alone can make a legend.

It is another happy ending film, like many other ones you loved seeing. As usual, it gives you strength when you try to recover from heart-breaking. It even empowers you as a love-challenger that the opportunity lies before everybody is equal not excepting that when you comes the second.

Johnny Cash and June Carter's story is a true one. She finally agrees to marry him after 30 times (or more) proposing. They were comitted on the stage. I was wondering how fortunate those audience could be!

Like the other people who turned to me and talk about this film, I only want to make a simple comment: it might as well being just another hollywood romantic film, but what the hell, Joaquin Phoenix is goddamn sexy, Reese Witherspoon did a moderate acting as well, the music is bumping on your heart, so I ended up coming out of the cinema with trembling legs – because I was way too exciting. Yes, it's an exciting romantic film!

So it is a film for you, to keep your faith of love going. And I am sure you will not be like the little mermaid with her breaking bubbles of dreams. You will have love, because you believe there is such a thing. 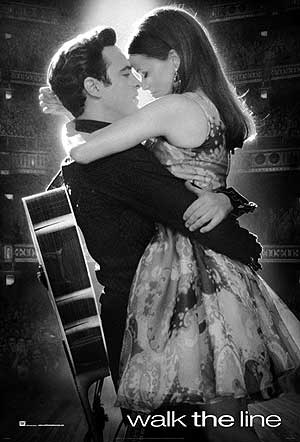 To start with, there is a quote from Georges Simenon

Passion is a malady. It is possession, something dark. You are jealous of everything. There is no lightness, no harmony. Love, that's completely different. It is beautiful. Love is being two in one. It is being so close that when one opens his mouth to speak, the other says exactly what you want to say. Love is a quiet understanding and a fusion.

I agree and disagree. The vision of love he describes, is the ideal of love. When someone could say something exactly what I want to say, or even more than that, better than what I can say, I would feel instantly madly in love, that's true. But that's more likely to happen between close friends than lovers, so that I call that love 'friendly love', it's sexless. (It can even be described with Confucious saying: 君子之交，淡如水。- the relationship between wise people is light as water.)Romantic love, on the other hand, comes with sexual passions, in my opinion, inevitably. Nevertheless I believe there is a bridge which you can build up to shift from the initiality of sexual passion to the idealistic vision of love. And the key word must be comitment. The closeness of sexual encounters is sometimes said to be mere pleasure, but I believe there's more than that – you carry it with other memories of you and your partner, and it is that whole makes you love.

(I'm hungry… I will come back to this topic later)

Now that I'm back, having some more opinions in my mind

– about sex without wiling to make comitment: it is not love, but it is possible that strong desire to reserve the moments of pleasure may push people to make comitment in consequence. What so terrifying is actually the lightness people bear in their attitudes towars these sort of encounters: the sex anarchy.

– I think it's scary to draw a line between sex and love as if they are distinctive sentiments. As we discussed in the lecture yesterday, the notion of love hadn't gotten well spreaded till the 18th century in Europe. Before that, there was sex, which was a taboo topic in the medevil time; and there was marriage, which was being institutionalised for survival. Love is a modern notion. I guess, therefore, what we call love today, might have been deprived from the intoxication of the aftermath of sexual desire and sexual behaviour. To distinguish the two, is to stigmatise sex, and mislead the understanding of love.

– That's probably one reason to cause the situation of sex anarchy. Because love is pure and untouchable, people discard it in their mind when they have sex, aiming only gaining physical pleasures, leaving themselves emptiness and melancholy afterwards, whereas all they desire for, might be just to be tied up with somebody, mentally, and physically.

– So it is neccessary to avoid sex anarchy. Learn to control the body, is saving it for better communication and better fun.

– Love is not light, and sex is not heavy.

Tags: Zp I Meaning Of Life |