All 5 entries tagged The Heaventree Press

The Heaventree Press in Poetry Wales

See below this extract from Kathryn Gray on poetry and its publishers. Note that the David/Jonathan Morley confusion strikes once again.

“Not all poetry publishers want to tussle with the big boys or even make any money out of their enterprise. Coventry is the home of the Heaventree Press, a community publishing house headed my David Morley, Director of the Warwick Writing Programme at Warwick University and which includes Wales’ own Zoe Brigley as an associate editor. Heaventree clearly has an eye for talent; they published a sample of Jen Hadfield’s work in Heaventree New Poets 2 back in 2004. Hadfield is a highly respected young poet who has since brought out a first collection with Bloodaxe, Almanacs . There’s ever the danger that talents will move on to ever more ‘visible’ presses – it’s a problem which effects smaller and larger independents, as proven achievers are snapped up by others who may or may not eb able to promise them more.

“Nothing wrong with this is in principle; it’s all part and parcel of poetry’s ecosystem, is healthy and, above all, ensures a feel of creative continuity in the poetry world. It’s self-eveident, however, that it must be difficult to watch your new talent grow into their genius under the auspices of another. But, when you are free of these issues – being ‘not for profit’ and posessing clear creative’ aims’ rather than ‘personalities’ to justofy your existence – you can bring on important work that doesn’t tick teh boxes of fashion or, necessarily, easy accessibility. The press has recently published collectiosn by Jamaican Kei Miller and the young experimental poet Malgorzata Kitowski which come complete with endorsement from leading names.

“More crucially for their ‘visibility’, they’ve achieved something of a coup by getting established names Mario Petrucci and David Dabydeen on board too, offering ‘limited edition’ pamphlets of their work. With Arts Council funding secured, as well as a generous community publishing award, I’ll be watching with interest to see how their mission statement develops over the next few years.” The new issue of Avocado is now out. For only £2, you can read:

Also available are new pamplets by Malgozata Kitowski and Milorad Krystanovich. Further details of these will be posted shortly. 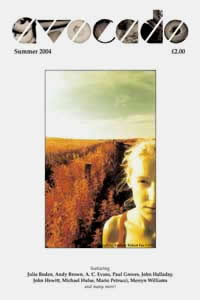 The new edition of Avocado is now available featuring new poetry. prose and reviews. Features included are as follows:

*'An Irishman in Coventry'-John Hewitt in the West Midlands.

For more details follow the link above which will take you to the Heaventree website and catalogue.

HEAVENTREE is a new poetry press that already shows immense promise. ~The Guardian

The Heaventree Press, Winner of the Raymond Williams Prize for Community Publishing 2004 is a not-for-profit West Midlands based independent publisher, specialising in anthologies and pamphlets of new literature. Set up by local young poets as a community venture, Heaventree is dedicated to promoting arts in coventry and the surrounding area.

ABOUT THE HEAVENTREE PRESS

Heaventree began germinating in April 2002, after a conference at the University of Warwick called The Crisis in Poetry Publishing.
The crisis, a word some of the debaters did not feel appropriate, was in poetry sales for new or unestablished writers. Most of these writers are published by small presses with low budgets for marketing. Sales were bad, many publishing houses relied on Arts Council funding for a few years, before disappearing. Poetry is unprofitable, but that's not a shock to anyone.

Poetry is everywhere. There are hundreds of magazines, events, many national and some international festivals, workshops all over the country and thousands of books of poetry coming out every year. But the flood of poetry has made it hard for commercial publishers to make a living out of poetry.

The backlash is that major publishing houses have closed off their lists to poetry, especially new poetry. Most major houses who continue to publish poets stick to the established names, effectively creating an elite core who will make it onto the shelves in major bookstores, while excluding others.

Meanwhile, the specialist poetry audience has slowly expanded as new readers come to love poetry, but the number of people who might read poetry occasionally, just for pleasure, has been dwindling. Is it a lack of media coverage, marketing finances, or similar business slang? Is it that poetry is all a waste of time? The Crisis debate did not provide an answer. They left that to the audience.

So why, in this apparently hostile climate, did we start a poetry press dedicated to new writing? Simple: if sales are falling, it doesnt mean people no longer want poetry. It means they are not being given the poetry they want. Why should they pay more for poetry because commercial publishers want to make a profit?

Our solution is to give the poetry to the public, where we can, for as little as possible. We are doing our best to produce books and magazines at an affordable price, drawing in funding and subsidies. Where we do make some profit, we will channel the money back into providing more poetry, art, literature and music for Coventry and the West Midlands. 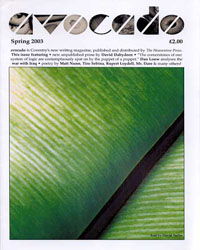 In December 2002 we received an initial start-up grant from The Princes Trust for our magazine, avocado , now a regular commercial product. The first issue came out in February 2003. Our first anthology, Phoenix New Writing, was published in July 2003, funded by The Phoenix Initiative, Coventry Councils regeneration project. It has since won the Raymond Williams Community Publishing Prize for the excellence of its contents and production.

Other recent publications are Saffron Tea, an anthology of British South Asian poetry; Jungle, a short piece of fiction by David Dabydeen; Half Life: poems for Chernobyl by Mario Petrucci; I Have Crossed An Ocean, an anthology of international writing from the Coventry area; and the first volumes in a series of new poetry pamphlets. More details about the books are available on other parts of the website.

We have other projects lined up, or in progress, including working with the refugee communities in Coventry; piloting a series of creative writing workshops for local young people that will fuse poetry, music, animations and performance; organising a new Black Poetry Festival in the city. Again, please surf the website for more details on these and other projects.

We also run a regular open mic night at The Tin Angel café, Spon Street, in Coventry, on the first Tuesday of every month. Its a good place to come and meet us and find out more about what we do. Bring your short stories, poetry, a guitar and a song, even a short stand-up routine, to share as well.