Talk by the playwright and actor, Susan Russell. 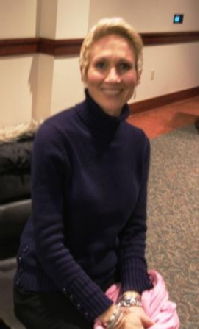 Last night, I attended Susan Russell’s talk to the local NVWN writers’ group. Russell is Assistant Professor in the School of Theatre at Pennsylvania State University. Talking in an informing and entertaining way, she discussed her experience of writing plays and her career in acting.

Her official bio says the following:

Susan Russell is an Assistant Professor in the School of Theatre at The Pennsylvania State University in State College, PA, where she teaches graduate and undergraduate literature/criticism, Playwriting, and Musical Theatre History. She received her PhD in Theatre Studies from Florida State University’s School of Theatre in 2007, her Master of Arts degree from Florida State University in 2003, and her BA in Theatre from St. Andrews Presbyterian College in Laurinburg, NC in 1979. Between her education pursuits, she experienced a twenty-five year career as a professional actor on and off-Broadway as well as a career in regional theatre and opera companies across the country. While performing for five years in Phantom of the Opera, she was an artist/teacher for New York Offstage where she created, developed, and implemented workshops in musical theatre performance and acting for high-school and university students, and was a curriculum creator for New York City Opera, where she created and developed arts based education program designed to meet the specific needs of selected elementary, middle, and high school programs. As a playwright, her works Olympia (1998) and Present Perfect (1999) have been produced by Emerging Artists Theatre in New York City, and in 2000, Lincoln Center selected Present Perfect for its Millennium Living Room Festival at the HERE Theatre in Soho. Her play Severe Clear was a semi-finalist in the 2006 O’Neill Theatre Center Playwriting Competition, and her new play Ecoute: Pieces of Reynaldo Hahn is on a 2009/10 national tour starring Norman Spivey. Dr. Russell is the author of a new book called Body Language: Cultural Conversations Reaching Out and Reaching In, and a new journal called Cultural Conversations: Works in Progress and Writers in the Making.

In her talk, Russell talked about her own struggle as a young writer to negotiate issues like the desire for fame and self-doubt. She expressed her fervent belief that genius is not simply gifted on writers, but must be worked for. Consequently, Russell encourages her writing students to write every day – to maintain their “morning pages”. She was so adamant that I actually sat down and wrote for 15 minutes myself this morning, which is something I haven’t done in a while.

Russell also emphasized that the writer’s life is hollow when s/he is not serving some cause greater than his or her personal or petty concerns. As an example, she mentioned the Pullitzer winning play, Ruined by Lynn Nottage, which focuses on the plight of raped women outcast from their communities in the Congo. This year’s Cultural Conversations drama festival at Penn State is on the theme of violence against women, and the programme looks fantastic. The line-up includes dramatic pieces by Gioia Di Cari, Kimberly Dark, Reagan Copeland, Josh Phan-Gruber, Barbara Korner and Deb Margolin. See more here: http://www.culturalconversations.psu.edu/upcoming_season.html