Robbing the Bride (published in The New Welsh Review )

Turn back, turn back, my pretty young bride,
in a house of murderers you’ve arrived. 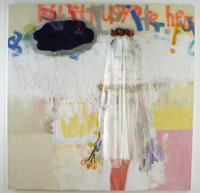 The bride looks up. A bird is perched in a cage above her head. From its beak come the ominous words again: ‘Turn back, turn back, my pretty young bride’. The house is dark, the time for meeting has come, yet though she searches the house from top to bottom, the bride cannot find the bridegroom. Instead she comes upon an old crone who is weary of life in that house of thieves. ‘If they find you here they will kill you’, the crone tells her. ‘You must hide here amongst these barrels and in the morning run home’. The young woman hides and in the early hours, she hears voices. A group of men burst into the room carrying a struggling girl. They fill the victim’s mouth with red, white and yellow wine until her heart bursts. The bride watches the bridegroom sever the poor creature’s limbs, salt her wounds and eat her body. The victim’s severed finger still holding a ring is flung aside and falls beside the bride where she is hiding.

The story is Grimm brothers’ The Robber Bridegroom, a variation on the traditional Bluebeard fable, and the severed finger with ring represents the fate of the bride in heterosexual relationships. There are many versions of the Bluebeard story which tells how a bride discovers her husbands murdered wife or wives. A precursor of the gothic and horror genres, the Bluebeard story prefigures what some critics call paranoid womans stories. From Brontes Jane Eyre to Du Mauriers Rebecca, from Hitchcocks Suspicion to Zemeckis What Lies Beneath, the Bluebeard themes of doubt and anxiety concerning male intentions are prevalent. Bruno Bettelheim writes that Bluebeard stories realise a young woman’s ‘worst fears about sex’, since the betrayal reveals a fraught and violent world of relationships (306). A ghostly fear is heightened by the underbelly of heterosexual union as Bluebeards stalk women’s dreams capturing them physically or emotionally.

Women’s doubt and anxiety is a significant theme in the work of Sue Williams, an artist nominated for the Artes Mundi prize for 2006. The prize stipulates that the artists must explore ideas of the human condition and Williams’ interrogation of the underbelly of heterosexuality is illuminating in a very human way. Her compositions are disturbingly squalid – the muddled lines, uneven boundaries, graffiti–like text and rough spontaneous sketches. Williams’ art often expresses moments of doubt or betrayal where trust fails and in interview, Williams admits that such issues emerge out of her own personal concerns: ‘I trust on a level that worries people around me. I put myself into dangerous positions.’ Like the bride of the Grimm fairytale, the women of Williams’ lingering portraits seem to be in danger.

In one of a series of paintings entitled, Wish U Were Here, a woman veiled in white material poses with a wreath on her head and long–stemmed flowers that she holds at her side. She stands silently like a statue about to be unveiled. Williams admits that the veil is a significant symbol in her art and she links it to a personal moment of doubt. She describes her first experience of marriage in terms not unlike those of The Robber Bridegroom:

I stared at my shoes as I walked up the aisle. I kept wondering if I had left the price–tags on the soles with their huge red Xs. I couldn’t help feeling that there was something wrong. I was sure that I could not play the role of wife. I refused to wear a veil when I married, although I came from a very religious background. The veil to me represents the farce of the virgin, another role that women have to play.

The white sheet is a symbol of the hymen and virginity yet the wreath and flowers suggests that she is a kind of sacrificial offering. Hovering slightly above her head is a dark shape like a cloud, a hole or a rift. Behind the figure, a graffiti scrawl ‘Wish U were Here?’ is barely legible yet it compounds the rift, the hole, the doubt. The situation is unsettling and the suggested purity and hence immaturity of the subject seems to relate to Williams’ idea that ‘as children, women are taught to be the seductress yet we are ignorant of what to expect or how to deal with it’.

The white sheet then also represents a certain ignorance of heterosexual relations. An interesting comparison is Isak Dinesen’s story ‘The Blank Page’, which tells the story of an order of nuns who weave the royal linen. On the morning after the royal marriage, the linen is hung from the window with evidence of the bride’s virginity. In return for their linen, the nuns receive the central piece of the sheet which they frame in a gallery and hang like art, yet one sheet in the gallery is blank raising questions. Had the bride already lost her virginity? Did she escape marriage altogether with its brutal parading of female pain? We cannot know the story and similarly in Williams’ painting, the white sheet is a blank page, a paradoxical strategy. Jacques Derrida’s description of the hymen as the feminine veil, a site of power, is relevant here and Williams’ mysterious women recall Derrida’s suggestion that the veil both ‘hides and shows the truth of what is present’(418).

Women’s sexual potency or impotence is at stake in Williams’ work and some portraits reveal knowing and aggressive women. These heroines represent the Bluebeard heroine after her experience of male violence and brutality. Tania Modleski explores the gothic genre to which the Bluebeard fable belongs. Modleski writes how usually the heroine ‘feels a strong identification with a woman from the remote or very recent past, a woman who in almost every case has died a mysterious and perhaps violent or gruesome death’ (69). In the Bluebeard tale, the women who communicate with the heroine are her husband’s dead wives, those who have suffered the brutal consequences of marital relations.

Some of Williams’ works seem to empathise with the murdered victim of the Bluebeard rather than the heroine. Williams’ dirty linen on line series of sketches empathises with the women in Dinesen’s gallery who could not remain a blank page. The grubby paper is etched with images that tell what happens to women who trust and as a consequence are betrayed. One image features an explicit act of coitus with the woman’s legs splayed open. The sexual act is mechanical and forced and the faces of the lovers are smudged, blank. A scribbled caption reads ‘10 pounds work’ revealing the sordid nature of this pecuniary exchange. The fate of the gullible woman is to be leeched of identity and Williams’ subject is devoured emotionally and physically with a similar symbolism to the victim of the Robber Bridegroom. Communication between the murdered wives and the struggling heroine is an important element of the Bluebeard fable. Williams sets up a similar dynamic with the woman who has suffered pain trying to warn an immature other. Another painting in the Wish U Were Here series portrays a battle between two women. Williams explains the aggression in some of her works in relation to the survival of artists in ‘a male world’: ‘Sometimes we rebel against this and try to behave like a man – we survive by taking on a male role in a male world’. The prominent subject in the battle here seems to be a mixture of stereotypical ‘masculine’ and ‘feminine’ elements; the agitator reveals a powerfully aggressive stance pulling the hair of the other woman, yet she retains her high–heeled shoes and feminine tutu. Williams explains that ‘there are ‘male’ attitudes within me, yet I also suffer acutely female pain: no man can understand this painful area’.

The symbol of the veil is developed here too as the aggressor of the battle is shrouded by her own hair. The veil of hair is a development of the blank sheet; hair represents burgeoning sexuality yet it is also reminiscent of vengeful women from the furies of Ancient Greece to Sadako in Nakata’s The Ring. The veiled woman is aggressively present, yet there is an uncanny sense of blankness. Williams describes how sometimes ‘the veil refers to the woman not quite knowing who she is – a certain lack of identity’. This explains the frustrated pose of the subject as she grips the hair of a blonde who gazes at some point beyond the frame. The blonde’s lack of awareness of the painful grip on her hair suggests preoccupation, ignorance and blindness. The active stance of the central figure is a stark contrast and there is a sense that two halves of a self are at war as the vengeful victim of betrayal reproaches the new victim for her blind trust.

Williams’ view of heterosexual relationships is not so bleak and she relates this to her own experience of bringing up a son: ‘I made sure that he was very aware of women and I taught him to never hurt another human being’. Williams has ensured that stories of heterosexual union will not always mean the death or betrayal of the bride. Women writers who use fable and folktales, such as Margaret Atwood, Angela Carter and Lorna Sage, have all emphasised the importance of using stories in which heroines win by using their own cunning. In these tales, we can see female playfulness, nonsense and laughter or perhaps what the feminist Luce Irigarary calls jouissance. Williams’ Mmmmm! seems to be an expression of defiant jouissance. The title’s unintelligible, onomatopoeic sound indicates the subversive feminine, while the mass of jumbled bodies, feminine objects and graffiti text aggrandise the female figure who leans forward at the centre of the chaos. The subject does not exist on a blank page, yet she is portrayed as sexually and physically powerful.

The Robber Bridegroom ends not with the heroine’s escape but with cunning manipulation of her Bluebeard through the art of storytelling. On the day of celebrations for the wedding, the guests sat around the table and told stories, yet the bride was silent until the groom asked her to join in. The bride tells of a ‘dream’ she has had, a dream of a dark house, a bird’s warnings, an old crone and a hiding place amongst barrels. She tells of the struggling maiden: of her burst heart, severed limbs and salted wounds. She tells of the ringed finger that was chopped from the maiden’s hand and with these words, she holds it up for all to see. The robber is seized at once to be executed with the rest of his gang, but the bride’s fate is a blank page.