Modernism was a movement with such power and intensity that even now it provokes nostalgia. In a new century, there is reminiscence for the potency of modernism. In the preface of Vanishing Point, an anthology of new modernist poets published last year, John Kinsella writes how the ‘avant–gardes that emerged out of modernities, have worked to challenge a status quo, or to assert their differences in perception. A more just way of expressing, or expression comes into play. It’s to do with seeing, and conveying the politics of that seeing.’

Art and design are always concerned with seeing, yet there is significance in Kinsella’s phrase the politics of seeing. Modernism championed design as a means of promoting political agendas and it was as much a statement of one’s ethos and ‘style of life’ as it was design.

The Victoria and Albert Museum’s (V&A’s) new exhibition is entitled ‘Modernism: Designing a New World 1914 –1939’ and it focuses on the international rise of modernism in the designed world, yet modernism is a slippery term. As Vassiliki Kolocotroni writes, ‘modernism is not a movement’ but ‘a term that masks conflict and upheaval and any number of contradictory positions’. First used as a term to describe a movement in literary studies, modernism entered the language of design via Clement Greenberg who defined modernist art as that of the avant–garde. In design, however, it is only in hindsight that movements such as New Architecture and the Modern Movement are described as modernist. Christopher Wilk, the curator, seeks to define a precise era of modernism in the time period of this exhibition. ‘It tells the story of modernism from the end of world war one to the end of world war two’, explains Wilk.

This is an eclectic show including artefacts that stretch the boundaries of conventional definitions of design. Alongside the photograms of Man Ray are Le Corbusier’s Villa Savoye. Beside the earliest modern fitted kitchen, designed by Margarete Schutte Lihotzky, is presented Dziga Vertov’s film, Man with a Movie Camera . Wilk’s choice of artefacts represents his view that ‘modernism was not conceived as a style, but was a loose collection of ideas’. The ideas selected by Wilk includes the idea of utopia, the relation of design to the machine, experimentation in representing the modern and expressions of freedom via the human body.

Much of the exhibition concentrates on the utopian desires of modernist designers. ‘Modernism began in the aftermath of the First World War’, states Wilk. ‘The outrage and horror set many designers on the path to reinventing the world.’ The exhibition begins by outlining Russian constructivism, a movement led by Alexsei Gan, who after the Russian Revolution, proclaimed that the artist should give up the bourgeois pursuit of painting and instead take up the position of industrial designer. In his 1922 polemic, Constructivism, Gan wrote: ‘The technological system of society, the structure of its tools, creates the structure of human relationships, as well’. He continued: ‘Art is finished! It has no place in the human labour apparatus. Labour, technology, organization!’ 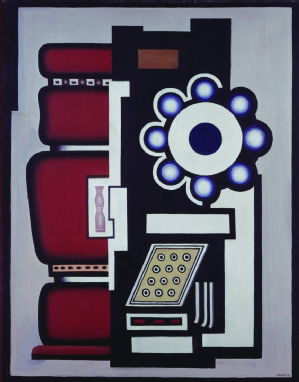 The synthesis of art and the machine is an appropriate focus for this exhibition, since as Enrico Prampolini asked in 1922, ‘Is not the machine today the most exuberant symbol of the mystery of human creation?’ The work of Fernand Leger is highlighted in the exhibition including extracts from his short film Ballet Méchanique (Mechanical Ballet) finished in 1924 and his Still Life with Ball Bearing (1926). Both pieces are obsessed with the working parts of machines via different mediums. Ballet Méchanique uses rhythmic cutting from images of machines working to create one magnificent working machine. Still Life with Ball Bearing uses the utmost control in oil painting in order to create mechanical shapes on the canvas. The control is reminiscent of machine production and the implication is that the painter is comparable with an industrial designer.

Often the obsession with the machine and technology had a utopian design. ‘The machine became an agent to create a new world’, states Wilk. The German Bauhaus are one such movement outlined in this exhibition. The Bauhaus was a school of art and design founded in 1933 and influenced by such teachers as Paul Klee, Wassily Kandinsky and others. Once again there is a modernist overlapping of different art forms as the Bauhaus school thought that there was no fundamental difference between fine arts and design. Walter Gropius was the first to write of a Bahaus movement in 1919. ‘Schools must be absorbed by the workshop again’, stated Grobius. ‘The world of the pattern–designer and applied artist, consisting only of drawing and painting, must at last and again become a world in which things are built.’ The Bauhaus was both utilitarian, meeting the needs of society, and innovative.

Photographs of the Bauhaus achievement are part of this exhibition, including a picture of the Bauhaus Dessau building designed by Gropius himself. The Dessau building was a workshop for the Bauhaus and the technical college linked by a bridge and it demonstrates the asymmetrical design and the principle that different spaces should reflect their different functions. The Bauhaus workshop contains open spaces and a three storey glass wall, while the technical college has smaller windows and intimate rooms for teaching.

Much of this exhibition is concerned with the theoretical aspects of modernism: its manifestos, its values and its movements. Yet there is also a great deal of information on the practical process of designing and redesigning. The chair was one product that offered endless design possibilities as modernists struggled to make a chair from the least number of components possible. Pride of place is given to the various designs of the cantilever chair (inspired by Ledwid Mies van der Rohe’s prototype). This design takes the weight of the chair on two legs.

‘It’s difficult to imagine just how revolutionary this chair with two legs was at the time’, explains Wilk. ‘In fact it’s said that some people in 1927 were afraid to sit on such chairs because it would fall down. There were metal café chairs at the time and there had been metal furniture in the nineteenth century, but the idea of using shiny metal furniture in the home, in the domestic interior was a completely new idea. This chair is now more than eighty years old which is rather hard to believe when it still looks absolutely modern and up–to–date and is still used widely in both domestic and commercial settings.’ Chair design was an integral part of modernist innovation. As Marcel Breuer said in 1927, ‘In the end we will sit on a resilient column of air’.

In considering the practical uses of modernist design, Wilk also places an emphasis on fashion. Alexander Rodchenko’s Production Clothing (1922) relies on principles of functionality with the androgynous uniformity of its grey wool and leather. In contrast, Giacomo Ballas Futurist Suit created in 1920 expresses the lively human spirit in its bright colours of orange, black and yellow. Ballas irregular triangular patterning manifests a desire for the disorder inherent in being different, in being unique. Sonia Delauneys Swimming Costume of 1928 reveals a liberated attitude to the human body and like Balla, Delauney uses the factor of simultaneity in which the complexity of modern life is conveyed by colour. Costumes for ballets and stage productions are also significant, one example being the Bauhaus costumes for Oskar Schlemmer’s Triadic Ballet during the 1920s. These costumes recreated the dancers as puppets and abstractions of the human body.

A few British examples of modernist design exist amongst the proliferation of Continental artefacts. On display is Henry C. Beck’s 1931 Sketch for London Underground map , that iconic symbol of London which has been in contnous use since 1933. Beck took the factors of simplicity and functionality to create a map based on connections rather than geography. However, it seems that British modernism developed later than in other countries. Wilk describes how modernism came ‘late to Britain when émigrés from commonwealth nations began to arrive.’ Yet British design may have a great deal to learn from modernism and this massive exhibition provides much inspiration.

A comprehensive study of modernist design is now available as a companion to the current exhibition edited by Wilk. Covering all of the modernist movements, from De Stijl to Bauhaus, and making connections between design and the arts, Modernism: Designing a New World provides good source material for designers interested in modernism. Like the exhibition, it makes connections between modernist design and art, literature, dance and stage production and in doing so represents the eclectic spirit of modernism in all of its guises.