Lowe notes that above all women have had problems in painting portraits. She notes: ‘Women artists who paint self-portraits have had to overcome an already given meaning – the equation of female self-reflection with vanity’ (58). Turning to the paintings by Kahlo, Lowe notes that her ‘construction of self’ is, ‘complex and astonishingly straightforward: without a hint of self-pity or sentimentality, Kahlo constructs her dreams, fears, passions, and pain with a forthrightness that defies social and artistic restrictions’ (58). 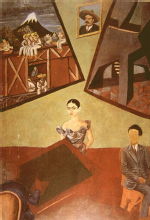 Interestingly, Lowe draws attention to a painting by Kahlo from 1927 entitled Pancho Villa and Adelita. Adelita of course refers to an old folk song about soldaderas. During the Mexican Revolution, soldaderas were the women who travelled with the soldiers sometimes to care for them, other times to fight with them and occasionally to intellectualise on the progress of the war. Lowe explains that the song, ‘is sung from the point of view of a sergeant who sings of his passion for his beloved, of his suffering heart, and of her fear of his dying in battle’, and the sergeant, ‘entreats Adelita to bury his remains in the sierra and weep for him should he perish’ (59). According to Lowe, the song is about ‘mutual devotion’ as well as dedication to the revolution (59). Lowe believes that in Pancho Villa and Adelita, Kahlo wants to be associated with Adelita as a specific kind of Mexican womanhood and representatives of a militaristic femininity. In her political life, Kahlo was a member of the Communist Youth League, perhaps in an effort to come closer to the role of soldadera.

You can see this really bizarre version of Adelita here that i found on UTube. King Bob tries to sing in Spanish and can’t keep up, but it gives you an idea of how the song goes.