The confessional women poets of the 50s and 60s like Sexton and Plath are the star witnesses desired by feminists to prove the inequalities of sex. However such critics tend to also feel uneasy about the personae of such poets. As Adrienne Rich said at the memorial of Anne Sexton, we have had enough suicidal women poets enough self-destructiveness. Similarly, this restored version of Ariel evokes divided feelings.

After Plaths suicide, the manuscript of Ariel was found by her husband, Ted Hughes, who consequently rearranged the poems for publication. Plath had spoken of Ariel as beginning with the word love and ending with the word spring, an arrangement evocative of a movement towards hope. Hughes arrangement denied such hope and instead concluded with bleaker poems such as Edge: The woman is perfected/ Her dead / Body wears the smile of accomplishment.

Frieda Hughes foreword to this restored edition of Harper Collins restored edition of Ariel is vehemently protective of her fathers memory regarding the rearrangement of her mothers poem. She writes, many cruel things were written about my father that bore no resemblance to the man who quietly and lovingly (if a little strictly and being sometimes fallible) brought me up. There is no doubt that Ted Hughes should be treated less like a monster and more like a human being and it is obvious that as Frieda Hughes explains, For him the work was the thing, and he saw the care of it as a means of tribute and a responsibility. However there is also a sense that Ted Hughes treatment of his responsibility was somewhat heavy-handed and it was his fallibility that led to Plaths final journals and an unfinished novel being lost.

This restored edition of Ariel rights the interference to Plaths ordering of her collection. Hughes list included extra poems such as Poppies in July, Little Fugue etc. but excluded other which are now restored in this new edition. Hughes selection of additional poems seems to favour works which feature a frenzied or powerful persona. Some critics support Hughes decisions describing him as a skilled editor and it is true to say that the poems omitted by Hughes are less certain in their deliberations and contain a strong sense of self doubt.

However, poems in a sequence cannot be compartmentalised or separated from the rest of the series. To treat poetry in this way is to ignore the purpose of a poetry collection which allows poems to interact as chapters of one general drama. I suggest that the restoration of the missing poems changes the feeling of the sequence. These poems are interesting because they depict identity being dictated to or forced upon the speaker. In The Jailer, Plath depicts a voice whose identity is violently imposed:

I have been drugged and raped.
Seven hours knocked out of my right mind
Into a black sack
Where I relax, foetus or cat,
Lever of his wet dreams.

The protagonist is forced out of her right mind. A new identity is imposed, which is mapped over death and birth: the black sack that means death for the kitten or the womb that means life and rebirth. Finally her selfhood is dictated by the sexual whims of the male tyrant: his wet dreams are the arbiter of her existence. Such poems contrast with the powerful personae of others such as Lady Lazarus and their inclusion creates a schizophrenic feel to the collection, as the protagonist oscillates between passive acceptance of dictated identities and powerful statements of dangerous, potent selfhood. 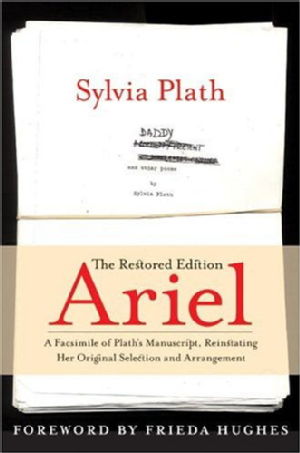 While the project of the restored Ariel is an admirable one, its treatment of the book is more unsettling. The cover features a pile of papers bound with an elastic band. On the front, in scrawled handwriting are the words DADDY, one of the titles Plath considered for her collection before her death. The collection features appendices which include a facsimile of Plaths manuscript, facsimile drafts of the poem, Ariel, and Plaths script for the BBC broadcast, New Poems by Sylvia Plath. The ostensible reason for such extras is to give the reader some insight into Plaths creative process. However, the dominant feeling is one of voyeurism and there is a sense in which the book is trying to appeal to the pornographic desire to be closer to the dead poet.

We may well question why there is still such an obsession with Plaths life, work and death. The enigma of Plath and her poetry is not simply due to her well-publicised biography, her journals etc. but is conjured by a shared sense of human pain. It is cathartic to read Plaths poetry, yet it disturbs us, because Plath has crossed the borders that bound identity stylistically and physically.

In her foreword, Frieda Hughes expresses fair concern about English Heritages desire to place a blue plaque on the house where her mother died rather than where she lived and worked. She describes one journalists response as Its because thats where she died. Plaths suicide is so significant, because it creates a dangerous subtext. To empathise with Plaths poetry is to involve oneself with a voice well on its way to self destruction or even to fraternise with the dead poet herself. There is a voyeuristic thrill for some in doing so.

The restored edition of Ariel engages with the play of desire and fear inherent in Plaths poetry and while the project of restoring Plaths manuscript is a good one, there is something disturbing about the collections proximity to Plath: the reproduction of her typed and handwritten words. Italo Calvino writes of the gesture of separation as the first and indispensable condition of being. Plath retains the legacy of one who redefined the boundaries of identity, who rejected the notion of a whole, bounded, separate identity. Plath rejected the gesture of separation and she failed to manage what Calvino describes as the separation of the part of me that remains from the part I must jettison, in order to sink away into a beyond from which there is no return.