Some of my favourite bookshops… 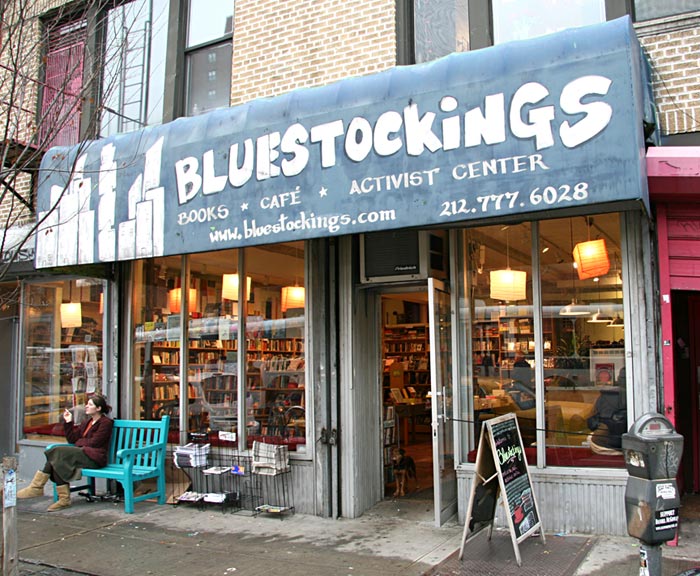 And one of my personal favourites: Gil Scott-Heron has always been an impassioned and inspiring performer, but I can’t pretend that I have always been completely comfortable with his polemic. When teaching political poetry in a Creative Writing workshop setting, I use his album Small Talk at 125th and Lennox to show the power of political writing, but also to highlight the problems in using poetry for moralising or didactic purposes. In this kind of workshop, it is useful to play students ‘The Revolution will not be Televised’...

In poems like these, Heron uses rhetoric, humour and irony to critique American society, but what is more disturbing is how he uses such techniques in the poem/song ‘The Subject was Faggots’, a diatribe against homosexuals. The homophobic hatred in this poem is shocking and disturbing, and it is very difficult to understand how Scott-Heron becomes so bigoted when he is such a passionate spokesperson for black rights. Thinking about these paradoxes, however, does force students to consider where the line is between political polemic and hate speech. As Tim Dellow explains for Rock Feedback:

Like with Johnny Cash before him, there is a desire to whitewash and sanctify the artist towards latter stage of his career. This is a man made up of many faults. (Rock Feedback ) It was with some trepidation then that I attended a little-publicized “reading” by Gil Scott-Heron at Columbia College, Chicago to celebrate African History Month. The reading, however, turned into a three and a half hour show to a warm audience of Chicagoans, who continually shouted or clapped encouragement.

After a warm-up act by performance poets, Verbatim, Scott-Heron began his set by simply talking, telling stories in a very honest and unaffected way. For example, Scott-Heron told the story of how he was touring with Stevie Wonder in 1980 when the terrible news came that John Lennon had been shot. Wonder decided not to mention Lennon’s death until the end of that night’s show, and Scott-Heron recalled in moving detail how Wonder spoke about his murdered friend. The next day’s newspapers, however, reported that Wonder hadn’t mentioned Lennon’s death. Scott-Heron told us wryly to always stay until the end of the gig.

When Heron did start to play, it was simply him and a piano singing classics like ‘Your Daddy Loves You’, ‘We Almost Lost Detroit’, ‘Pieces of a Man’, ‘Winter in America’ and ‘Or Down you Fall’. Later a pianist, drummer and a harmonica player join him to blast out more upbeat numbers like ‘Three Miles Down’, ‘95 South (All of the Places We’ve Been)’, ‘Work for Peace’, ‘Is That Jazz’, and ‘Celebrate, Celebrate, Celebrate’. The night ended with everyone on their feet, young and old, and it fe;t more like a gospel church service than a gig. Strangely missing were the diatribes of Small Talk at 125th and Lennox, as the more aggressive polemic was replaced by a message of simple survival. Less confident and knowing than it once was, Scott-Heron’s voice sounded all the more sincere when he sang out:

Little Magazines in the UK

At the end of last year, I was finishing off a series of Creative Writing workshops with my students at Northampton University and they asked me where in the UK they could read cutting edge fiction and where (eventually) they should be aiming to send work. I was recently having a similar discussion with some of my American friends a few weeks ago and so I post this list for their benefit. It is not exhaustive. Mainly it is a list of magazines that I have some association with or that I have read and enjoyed. If anyone has any more suggestions of UK magazines, please feel free to add them.

It’s best to read these magazines before sending off work, so that you can get an idea of what they are looking for. Even if you just order one copy, it’s a help.

Agenda
Send up to 6 poems.

Flash
Flash fiction only up to 360 words long.

Poetry London
Send up to 6 poems.

Poetry Wales
Send up to 6 poems.

The London Magazine
Fiction no more than 6000 words long, poems no longer than 40 lines.

The New Welsh Review
Fiction no longer than 3000 words, or up to 6 poems.

New Writing
New Writing is an annual anthology of new literature in English from the UK and the Commonwealth, subsidised and administered by the British Council and published by Granta. It provides one of the few opportunities in the UK for unknown writers without an agent to get published by a leading fiction publisher.

Under the Radar
Under the Radar welcomes submissions with open arms. Please send us no more than six poems, or a maximum 2,500-3000 words of fiction.

Stride Magazine
Send up to 5 poems.

Crimewave
Crime fiction up to 10,000 words