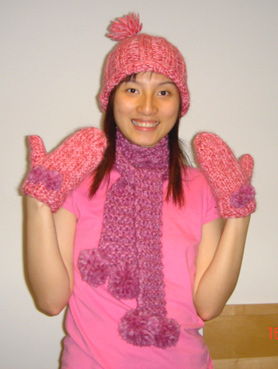 I received the Rowan knitting book "Big just got BIGGER" today. Rowan yarns are just sooooooooooo expensive that I have to ponder the expenses a lot before I can make a decision to make a scarf or so…

So finally I believe I will make a scarf and a hat, if and only if I've got the money.

They are both made of Rowan Big Wool and require JUMBO needles to knit them. (which means I have few chance to find them on Ebay) There are pompoms on both of them, so I hope they will match with each other. Here are the expenses:

See how expensive is that! Maybe I will wait till my birthday and try to convince my boyfriend to buy them for me…hoho!

The Sims 2 is finaly on the market…It is sold as 34.99 pounds… really expensive…
(Amazon is currently selling it for 27.99! Great! Thanks to She Bevan~ But still very expensive for me…still considering…)
I wanted to download it from BT, but always couldn't get connected…
Just now in Costcutter, I found a really interesting and creative advertisement of The Sims 2 in one of their magazines. These foreign people really can do things which we couldn't do…superb.. When I was in summer holiday, I already have planned to buy this knitting book, but I have to wait for a few days longer, coz the term just started, the post system maybe isn't quite normal yet. I am quite interested in knitting accessories, such as scarves and hats…Maybe I will get more opportunities to wear them.. 这条织给震华 This one is for Isabel. 这条织给帆帆 This one is for Fanfan 这条给自己 This one is for myself