Yesterday, we (Tsuyoshi and Nami) made an appointment to meet again to play pool in the everning. Then at the time, Nami found Mai on the way, so she also came to join us~

The result was…...the group 'I' was in…1won 3 lost…...um….it's strange~~ Well, it's really fun to play with lots of friends!! And ya, I really enjoyed meeting them and playing games. I don't know how many times we'll do, also we've done…..I think the more the day we'll finish our course get near, the more frequently we meet each other.

In fact, in the week day, I don't see many Japanese friends on campus, probably just because of different slots in modules. And so actually I want to see my friends at the weekend. 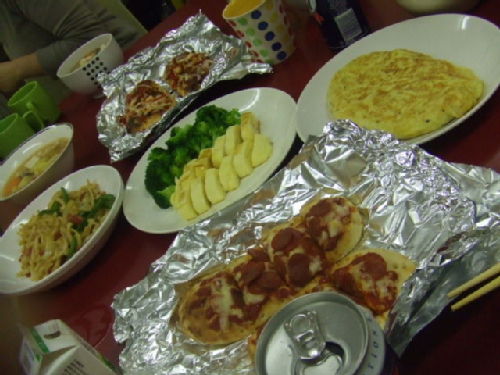 After playing pool, we somehow decided to have dinner together, and at first we'd have just a junk food (pizza or something), but finally we cooked a lot of dishes. Also later Mai and Akito came and join us bringing Tamago-yaki!! It's really soft and delicious~~
After all, our dishes is, Tonjiru, Sause-yakisoba, Spanish Omlette, Pizza and Tamagoyaki!!......We didn't expected to have such a various dishes though, we were fully satisfied!!

Today, I went's Godfrey's house to join afternoon tea, and there unfortunately there're a few people at this time for usually I met lots of people. There except for me, all the other students are chinese, Sherry, Victor and Stuart.

We talked about a lot of genre; language, mediacal serve in each countries, chinese traditional treatment and medicine, Japanese film, Shogun, Olympic game, etc…...
We've stayed there for a couple of hours until the sun has completely set having some tea and sweats.

Then coming back and took a nap, cooked dinner….. 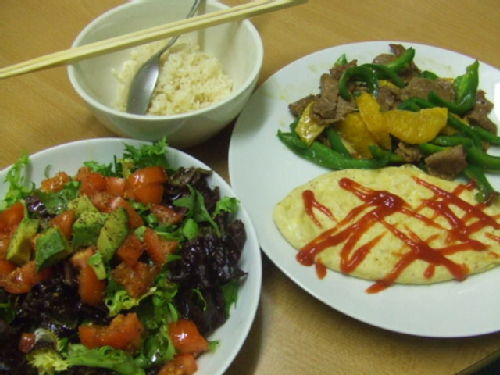 Um…..I haven't studied well in this weekend….....well, would be ok to have such a relaxed time sometimes; having a chat with lots of people, playing games…....good to be socialised!!