Escape to the Country 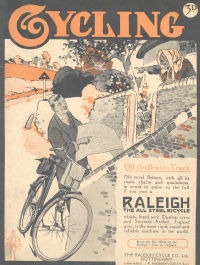 The late 19th and early 20th century saw a boom in day-trippers choosing to explore the British countryside, aided by recently invented forms of public or personal transport such as the bicycle, charabanc and motorbike.

This is the front cover of 'Cycling' magazine for 27 October 1921, and features an advert for the Raleigh all steel bicycle. The advert emphasises the freedom that a bike can bring, but peddles a nostalgic and highly idealised view of the British countryside - filled with helpful, bonneted old crones in thatched cottages, ready and waiting to direct lost young townies along empty roads.

A rather more jaundiced view from a 1928 issue of the same magazine is included in the online resources for the undergraduate History module 'Britain in the Twentieth Century'.