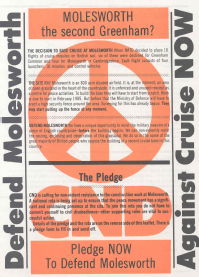 Versions of the current debate over defence expenditure - whether to replace Trident nuclear weapons or to instead spend the money on conventional weapons - have been going on for as long as Britain has had the bomb.

This Campaign for Nuclear Disarmament (CND) leaflet reflects the opinions of the strong anti-nuclear lobby of the early 1980s, and was part of the campaign of non-violent resistance against the deployment of NATO / US nuclear missiles on British soil.

Other documents relating to peace movements in Britain, including CND and anti-war groups, are included in the online exhibition 'Protest and Survive'.