All entries for Thursday 28 October 2010 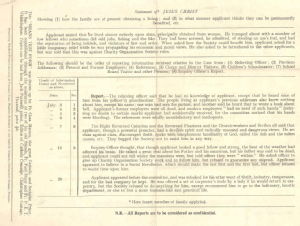 Arguments over whether recipients of state aid or charity are 'deserving' of assistance (or are in fact exploiting the system) have been raging since at least the 1601 Act for the Relief of the Poor. This week's document is a mock application form for charitable relief from the Whitehall Charity Organisation Committee, filled in on behalf of Jesus Christ by Father Charles Marson in 1886. Marson was a Catholic priest and had served as a curate in the East End of London. Through the form, he satirises the Charity Organisation Committee's methods of assessing charitable cases according to their perceived worthiness, rather than purely by their financial need.

The application form is included in the Modern Records Centre resources for the History module 'The Victorian City'. The website also includes examples of the opposing point of view - notably extracts from a speech by Rev. E. Gurdon, Rector of St Anne's, Limehouse, to a meeting of the Council of the London Charity Organisation Society, in which he complains that "careless and indisciminate relief" has resulted in the replacement of the independent East-Ender with a "professional whiner and loafing cadger".