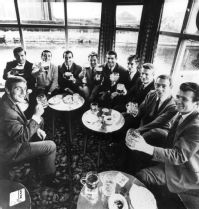 Now that football has resumed after its lengthy summer break, this is perhaps a good opportunity to look back to previous seasons and see how the game and its place in society have altered.

This photo shows the Liverpool FC first team in the pub, brandishing pints, the day before the 1966 Merseyside derby (they beat a presumably less well fortified Everton 5-1). The shot was used as part of an advertising campaign by the Brewers' Society, featuring celebrities from the worlds of sport, film, television and literature.

Other images relating to 125 years of football are in our online exhibition '125 Years of the Beautiful Game: Football, Politics and Society', including top-end football kit from 1884, impressive footballing moustaches, and early debates over the morality of player transfers and the merits of fan-ownership.

The Good, The Bad and the UKFC

Clint Eastwood's recent appeal to the British Government to save the UK Film Council allowed the nation's sub-editors to dust off its Dirty Harry / spaghetti western puns, and served as another reminder of the close but often troubled relationship between the British film industry and government.

In the 1920's and 1930's all political parties saw the new medium of cinema as way of reaching out to a mass audience, the majority of whom would have had no access to other broadcast media. This image shows a small audience investigating the 'Touring Talkie Daylight Cinema Saloon', a converted van which toured the country and broadcast short topical films promoting the Labour Party. The Conservatives had a rival 'Touring Conservative Unionist Cinema'.

The Modern Record's Centre's online exhibition on ''The Power of the Cinema': Film in the 1920s and 1930s' also includes a 1932 memorandum to the government from the CBI and TUC on the importance of the British film industry - concern is expressed over "the menace of Americanisation by means of the film", and the perceived threat from Hollywood imports to Britain's financial interests, "English speech, customs, and cultural standards". With the school summer holidays now in full swing, parents are again faced with the annual challenge of keeping their children occupied during what must sometimes seem like an eternity until September.  In 1955 this need was met in Crawley (Sussex) by the opening of an adventure playground. This view of children busily engaged on construction work is from a booklet issued to mark the playground's first year of operation, in which the above comment by a tolerant neighbour appears.

The booklet (reference MSS.121/AP/3/11/2) is one of many records relating to adventure playgrounds in the papers of Marjory Allen, Lady Allen of Hurtwood,  landscape architect, campaigner for pre-school education, and promoter of child welfare.  The establishment of such playgrounds was a reaction against the constraints of the typical municipal playground with its swings and its asphalt.  The diary of the Crawley playground's leader, which also features in this booklet, shows that the local children relished the hammering, the digging and the bonfires, but maybe a modern health and safety inspector would take a different view.

This document features in an on-line version of Charity begins at Home, an exhibition staged at the Modern Records Centre for a workshop organised by the Economic History Society and the Voluntary Action History Society on 27 March 2010.  The items were chosen to illustrate some of the research interests of those attending. 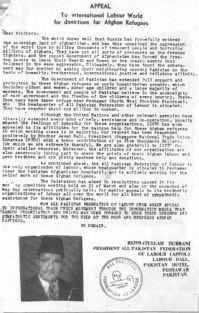 Appeal for donations to assist Afghan refugees in Pakistan, 1980

Now is not the first time that troubles in Afghanistan and Pakistan have had an impact beyond the region.  This circular from 30 years ago describes how the Soviet invasion of Afghanistan had forced about a million Afghans to seek refuge near Peshawar in Pakistan's North West Frontier Province.

The recipient of the circular, Len Murray, the general secretary of the British Trades Union Congress, replied expressing his organisation's sympathy and reporting that it had supported a recent contribution made by the International Confederation of Free Trade Unions through the United Nations High Commissioner for Refugees.

The file containing these documents includes further evidence of the concern felt by trade unionists around the world over the Soviet Union's military intervention in Afghanistan.  Unsurprisingly, the responses of Soviet labour organisations give a rather different interpretation.  In a letter to the British National Union of Mineworkers, the secretary of the Soviet Coalminers' Union accused the United States and China of trying to undermine the Afghan "antifeudal revolution" by setting up bases in neighbouring countries for arming and training "counterrevolutionary gangs" (possibly the same people described as "freedom fighters" in this circular).

'Red Octopus'?: Spying in the USA 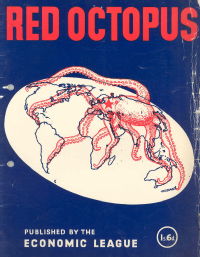 The exposure of an alleged 'deep cover' network of Russian spies in the United States last month (accompanied by coverage that appeared to owe more to 'Heat' magazine than to John le Carre), acted as an odd reminder of the height of Cold War paranoia.

The image shown here is of the front cover of a pamphlet of anti-Communist propaganda included in the archives of the Trades Union Congress. It was published by the Economic League, a fervantly anti-'Red' and pro-free enterprise British pressure group, in 1950, and warns against the "tentacles of the Red Octopus" spreading across the globe. The publication reflects heightened fears of Communism during the period of the Korean War (one of several times when the Cold War turned "hot").

This is one of 17 documents included in the Modern Records Centre online exhibition on the Cold War . Other subjects covered include the division of Germany, fear of McCarthyism, the 1956 Soviet invasion of Hungary, alleged torture at the US base at Guantanamo (in 1963), and the convictions of Julius and Ethel Rosenberg - in a period when accusations of spying for the Russians could mean death.

This blog will be brought to you by the archivists at the Modern Records Centre. It will show that our archive holdings contain many past echoes of today's issues and events. We will draw on the 'Topical Document' feature on our website to look at earlier perspectives on phenomena such as banking crises, recession, flu epidemics, drink-driving, conflict in Afghanistan, proportional representation, coalition governments and cuts in public spending.  We also have a number of online archive exhibitions and resources specifically tailored to Warwick undergraduate modules which can be used to illustrate the differences and similarities between then and now.

The Modern Records Centre is one of the things which make Warwick unique. We were founded in October 1973 with the principal objectives of locating and preserving primary sources for modern British social, political and economic history, with special concentration on the national history of industrial relations, industrial politics and labour history. We are the leading repository in the country for the archives of trade unions and employers' organisations, and we also have important holdings relating to pressure groups, radical politics, cycling and the British motor industry.