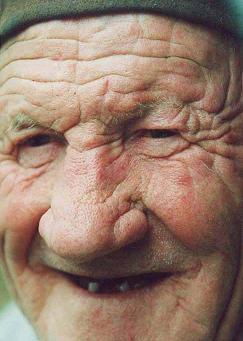 I was writing notes when watching this film. Writing notes in the dark is fun. The best bit comes when you walk out of the cinema and read what you've written. Scribbles of all sorts that keep track of what I've just seen. It's pretty amazing, I have to say.

Hukkle is an experiment as I see it. It's a boring, routine, mundane life with slight emphasis on sound and noises. Closed up depictioin of nature and human is unbelievably realistic. Events that are in the bare fact of being captured make the film more special. Cat yawning so naturally, ladybird climbing up earphone wires – nature is perhaps the most natural actor ever.

Beautiful fields like strokes of a large paintbrush. It's quiet and inanimate from up there, but it's vivid and full of life down here.

Drapes made of camera films, dresses made of drapes…

Have you ever stared at the balls of a pig? Hukkle gives you a unique opportunity to study the dangly round bits of a bi-coloured pig. Following the pig, we hear a passionate roar of courtship and happy faces of farmers witnessing and cheering to the love making of their pigs. Discovery channel of the urban wild life.

Even with radio loud on there are still distinct noises of life. I wonder if the people in the film are actually actors and not real people. It seems more like a documentary.

Everything is linked up to another thing. Everything passes the eyes of the hiccuping old man. His hiccups keep the rhythm of life and resemble heart beats.

Gran's disgusting cooking that we never come to question when we are little kids. How much of this is true and how much is make up? It's like a train of thoughts.

Death is an accident. And so is life. Everything remains the same, no matter what great changes are made.

The revenge of the ugly beefy women is what I think this film is about. Well, all films are essentially about life. But this one is a pure experiment that altho looking boring and raw, has its own thin line of humour and a peculiar sense of life.

People and link animals link in Hukkle are surrealistically real. 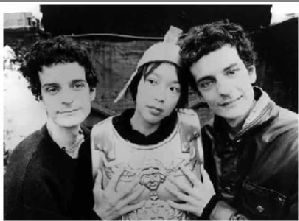 For as little as I know about music, the Blonde Redhead is briliant. Their music is unique, expressive and romantic. 'It's like cats screaming'* – said Hamid. But I love that vagueness coming from inside the microphone. The instrumental part is not genius, but done with great taste, that is truly rare.

The male vocal… 'I can sense the darkness'* – was what Alex said about it. It's almost moaning and crying, stretching the sound through the music. It has the mentalness of youth. It makes me imagine a skinny topless male in his early 20's, with a broken guitar and half-mutated voice. Too tired to shout passionately, too much of a nihilist to care about the words.

The female vocal is more romantic, sometimes hysterical; it shares the youthful features with its male counterpart. But it sounds more tragic. Brings up an image of a very artistic individual, with a strong attitude (like Bjork).

Elephant Woman is the most beautiful song from this album. Falling Man is rather ironic and generally genius. Messenger is the most representative song of their work.

Pi is a photographic genius. Filmed in black and white it tells a familiar story of a semi-secluded scientist whose life is all about seeing an order in chaos. Brought down to the simplicity of numbers, Max Cohen (Sean Gullette) realizes that in search for a key to the numbers in stock market he gets hold of the key to the entire nature.

From his early childhood Max inherited an ailment recurring in unbearable headaches and hallucinations. His mum told him not to stare at the sun, so he did. Perhaps from sheer curiosity or from the very desire to find the answer to everything. The punishment for such interest came in physical torture for Max. Every time he gets close to the answer he gets thrown into the hell of pain.

The film adopts features of chaos, that nevertheless leads to an end. Everything seems to be symbolic and telling. But putting it together, linking it all up to a firm string of evidence, seems a shot a bit too far. After all, ignorance is bliss.

Creepy, freaky, careful whisper. It gives you a feeling of idleness. It conveys sweet passion without screaming drama. Relaxing and moving, sometimes depressing. Candle light in a dark cosy room, curtains wide open, observing the world and listening to Sparklehorse - bliss for a romantic like me

I am
the only one
can ride that horse
th'yonder

I'm full of bees
who died at sea

I'm the dog that ate
your birthday cake

Other albums Vivadixiesubmarinetransmissionplot (1995), Good Morning Spider (1998), It's a Wonderful Life (2001)