My granny, the absolutely admirable embodiment of a Chinese woman of her age (circa 1920s), pulled out a performance tonight I never expected from her. She started off by singing Peking Opera with her fake teeth removed and only one tooth left in her smoky mouth. Smoky mouth but shiny tooth she had. She sounded enlightened, her spirits lifted and mind drifted into another, a better world. After that stunning and amusing act she sat down on a shabby chair next to my mum, the embodiment of communism in her spirit and soul. They chattered kindly; they picked the most innocent people to be the honourable victims of their after-dinner gossip session. But tonight I was around and I was eavesdropping. They spoke of no one else but my MaJong partner  my third gran (my grannys third oldest sister). They talk about relatives a lot, but tonight it was especially interesting.

She had good education  my gran informed my mum, she finished primary school, I think. But you know what they say, she was a lesbian!. My gran gave me a suspicious look and then plainly looked away, as if I wasnt there. And I sat there in the dark, listening to every single word they said, greedy for more details about this innovative gran of mine, who obviously thought needed to emancipate long before the English had their first gay and lesbian parade in 1970s. She married unhappily  my gran continued, People say shed been so vicious with her husband that the poor guy couldnt handle it and passed away. After that she tortured her son until he had to move out. Right about there I started feeling somewhat proud of my third granny, whose actions were being condemned by the rest of the family, but silently praised in my heart. Im not a vicious lesbian/man-hater myself, but I liked that spirit of rebellion. I felt like I got to know my gambling pal at a whole new level. I also had a peep at the so often ignored subculture in the great communist China. It sounds like something really worth exploring.

Back to China yet again…

I remember the first time I consciously settled myself before a telly I had an extensive shock and a repeating feeling of déjà vu. I think it was some decade ago, at 7pm Beijing time. It was much like a scene from 1984: all the channels were showing one the same piece of news, read by the same anchors. A decade later, standard Beijing antenna can receive up to 74 channels, including regional and international channels, and out of those, around 15 channels broadcast childrens programmes, some broadcast classical music, some regional channels show their own home-made soaps and the rest, the rest obediently gives its way to the CCTV news. I cant believe Im still shocked by it. 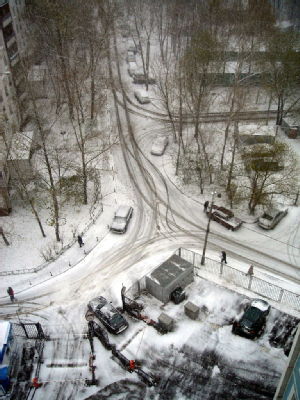 Tags: From Love Russia With |

I have a big agenda for tomorrow:

A man needs a wife, because not everything can be blamed on the government

What religion is God?

If God was Christian, then God would simply be an egotistic jerk who's made himself the centre of his own religion. If God was of any other religion, though, he would simply be a hypocrite, promoting one set of beliefs and acting upon another set of morals. It's a very sensitive issue! Hence I conclude: godless religions are less confusing.

Postcards that I owe you

I'm sorry, but you suck. Now who doesn't suck and does produce pop art that 'reflects modern life' are the Russian pop artists, whose works are being exhibited simultaneously with those of Warhol in the New Tretyakov Gallery, Moscow. I walked thru the large rooms of Warhol's exhibits and nothing had caught my eye. Large, colourful images, blurred, painted over; enormous pictures of cans of food, pistols and flowers. Everything there was annoyingly obnoxious and phony. I don't suppose people walking along with me found it exciting or enlightening either. They all looked bored, but polite nevertheless, polite enough to produce a sigh of amusement automatically, after every five metres of space they covered. We rushed thru the exhibition, confused and annoyed at the high price for the real rubbish.

But just as I thought I'd wasted my time and friends' good will to entertain me, we found another exhibition hall with a fine collection of art works by Russian pop artists. The second I walked into the room I gasped. It was amazing. Not Monet-amazing, but more creatively amazing. Everything was about the tiniest details of life; enlarged, as pop art dictates, but bearing much more meaning, full of humour and ironies and generally more creative than Warhol's canned food. There were bits that awfully resembled Warhol's, but others were great. There was a glass sculpture of a bull couple copulating; there was a wooden composition, representing a number of viewers sitting in a half empty auditorium and watching something, each with a different emotion written on their wooden faces; there were other fascinating things, like a big wooden well and other funny things from life.

Just because it's pop art doesn't mean it has to be rubbish. Thank god garbage hasn't become popular yet.

I left Russia and my Russian friends for two years. During that time:

It's only been two years and it feels like the world has turned upside down. The same faces, the same lovely smiles, with only just a couple more of horrible stories in their backgroud.