Being an engineer I do like doing things with my hands… sometimes I like to build contraptions that, despite following instructions meticulously, never quite seem to work as predicted.

In this case however it isn't my fault. The car I am currently building, a Nitro racer, is part of a kit, and is build up over months; as new parts are sent mensually.

However there is far too much backtracking between issues and it is getting rather frustrating.

Just thought, since I now have a blog, I am entitled to my own little rant every now and then.

Just like to thank Chris for his comment. And would like to point out that the speakers at the front of the stage pack quite a punch. I swear i still can't hear properly out of my right ear. And i'm now listeneing to the Levellers.

I also would like this opportunity to say Hi to all the beige people out there.

HAHA I have decided i would like to adopt the word beige although magnolia could be appealing, though decidedly less catchy

Well it started off in a fun way. Up at the crack of dawn to be on the road for the unearthly hour that is 5:30am. We sped down to Luton and had a very quick run.. or at least it seemed quick when you sleep through it. After a early phone call from rach making sure i didn't kill myself on holiday. 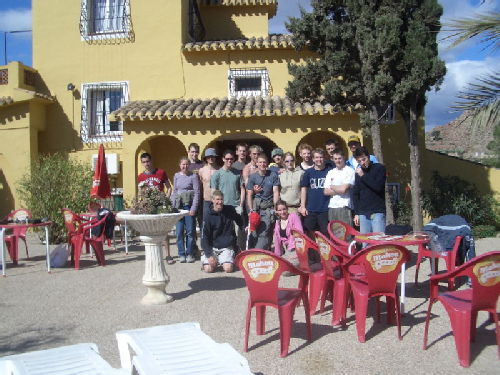 On the first day we went to a good rock face, about 15mins away by car, called sella. This is where I did my first ever sport climbing lead. It was a truly terrifying experience the moment you get above your clip you realise that the rope is below you and if you fall you are going to fall several metres. You then focus on your holds and footing , and no matter what you do, they always seem to be getting more slippery, or, are smaller than you first thought. 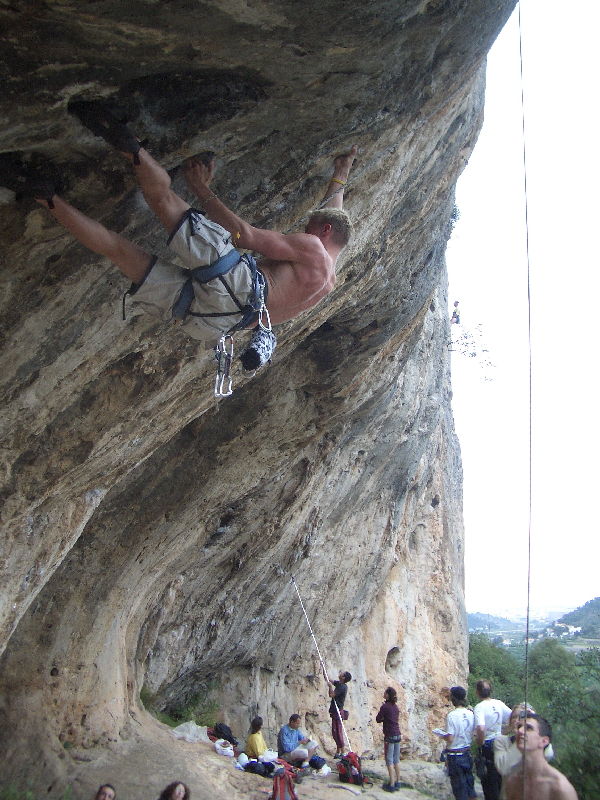 The rest of the trip is a whirlwind of climbing experiences and amusing drunken nights with great mornings after. Notably i managed to Flash lead a nice 6C+ and lead a 7A which is my best outdoors at the moment.

So a great trip was a great success i particularly enjoyed Ghandia, a great place with lots of powerful low clmbs as well as a great climb up a hole which you could invert yourself in on the way down.

I would like to thank…
Our cars driver for his speedy driving (surpassing the speed limit with considerable ease) which meant we were first to the rock and first back to the single cooker. HAHA
Thanks Trandy for the projectile vomit off the top bunk. Finishing that bottle of vodka was a truly monumental effort. I don't have a picture but this was a monster 3 litre gone in one night.
Ta to Jack who climbed with me; leading up the problems so that i could then do them on top-rope (i'm such a pansy)
Finally i'd like to applaud rich who was the first resident at the orange house to need to be air lifted off the mountain. You are a filmstar as some of the other residents at the orange house cracked out the videocameras to film the rescue ( I would also like to point out that once rich got back climbing after several months off it only took him abut a week to break his foot.)

So when's the next one..

Wow!! Great top B. Just got back, my ears are still ringing. I am pleased to announce that i managed to give two wedgies this fruitful night without punishment.