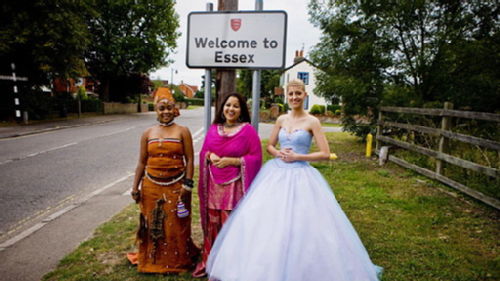 The dating world can be a scary place. Bars and clubs are full of people who either want to  fight you or have sex with you. Everyone is incoherent, nobody can dance and the likelihood that a spilt drink will wreck your carefully selected outfit is incredibly high. That person you pull in Smack does not a partner make. Thankfully, I don’t have to suffer the pitfalls of danger-dating any more, but plenty of people march on like lemmings into its unforgiving abyss.

Joining the plight of Britain’s singles are the Undercover Princesses, coming all the way from Germany, India and Uganda to find themselves the perfect English gent. In Essex. Sexy, classy Essex. I’m not even being sarcastic: at one point in the program Princess Sheillah from Uganda points to a picture of Jodie Marsh and declares that ‘she is sexy!’. Which is kind of a problem when these women are supposed to be princesses. Princesses should be worrying about their comportment and engagement with their subjects in a demure and dignified fashion, not about imitating Jodie Marsh’s style.

Then again, truly demure and dignified princesses would never appear on BBC3 full stop, let alone on a program which follows them on a path of almost certain rejection and humiliation. Something gives me the impression that these women are looking for something other than love. Princess Xenia is the German equivalent of Paris Hilton. Rather, Xenia thinks that she is the German equivalent of Paris Hilton. In her introductory video, they were demonstrating her fame by showing her being photographed by various members of the German public, each one looking more bemused than the last. I get the feeling that perhaps she isn’t as famous as she wants to be and doesn’t want to date an Essex lad, rather to make herself into an uber-star.

Princess Aaliyah of Balasinor, India has the most rose-tinted view of her trip to beautiful Essex. I can only imagine the meetings that must have taken place between the producers and the Princesses. They probably pulled out some Victorian propagandist paintings of the quaint and sophisticated English countryside, coupled with a showing of Pride and Prejudice and a booklet of typical British bachelors comprising mainly of pictures of Hugh Grant, Robert Pattinson and Prince Harry. Whereas Xenia went into the program with her eyes wide open, Aaliyah is far more shy and is seen to break down on the streets of Essex towards the end of the episode. Knowing how reserved she is, surely the producers were gearing her up for an inevitable and embarrassing downfall?

I suppose that’s a bit of a ‘shame on them’ moment, but I genuinely enjoy seeing people breaking down on TV. It may be a little bit perverse, but some of the best TV moments ever come from seeing people in the flux of a mental breakdown. The intention behind the Undercover Princesses isn’t all that machiavellian, but it is an example of how all realityish television is just exploitative TV. The Undercover Princesses is an aftershock of the successful disintegration of Vanessa Feltz on Celebrity Big Brother, Les Dennis on Celebrity Big Brother, Leo Sayer on Celebrity Big Brother, Shabaz on Big Brother...well, actually, almost every single Big Brother contestant ever. Not that there is anything wrong with exploitative TV. It’s entertaining! The dating world might be a scary place, but sat at home watching The Undercover Princesses, we don’t have to experience it. All we have to do is watch three privileged women set themselves up for disaster. Brilliant.