All entries for Thursday 21 January 2010 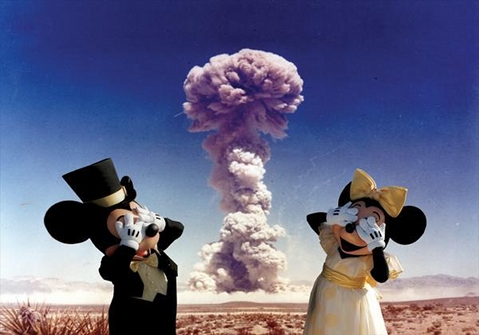 Lionel Shriver: 'Writing is fundamentally dull, and there are no real secrets to it: You sit down, you type something out, most of the time, if you have any self-respect, you throw it away.'

Hilary Mantel: 'Where do stories come from?'

DBC Pierre: 'I suppose I put off writing because I sensed I would have to be honest, which I have not been traditionally good at. And I sensed it would be a long haul. My main reference point was the TV movie; I wanted to use the style of the subject to satirise the subject. I'm not well read, which may have worked to my advantage in a curious way, but it also meant I had to sit down buck naked in my mind and give it my best shot.'

RE. the mutilation art of Muehl, Nitsch, Brus and Burden, I stumbled across this article by Germaine Greer: 'Artists' Self-Mutilation' which actually led me to the discovery of Burden and Brus. Additionally Schwarzkogler but he is sadly dead. However, he had this to say: "The artist does not work in order to live by his work, rather for him his work is life itself."

Balloon. In the Park. With the girl. The clouds were bubbles. The grass was Velcro. They were stuck, heel to head, waiting to be ripped. She knew. She didn’t squeeze his hand. She knew.
He looked at the sky.

“It’s too dark, don’t you think? Too dark. Too dark. Yeah. It’s too dark. Pop the clouds with me? It’ll be so very...”
She lay, hooked to the ground. Eyes closed. Waiting for the rain, the rain.
“... (he thought that it was too quiet. He breathed, louder. He dot, dot, dotted.)...”
His fingers opened wide. His arms lay like stockings weighed down by stones. His body, sand. His head, a single, pink balloon. He was strung together with bright blue wool. A knitted, permeable spine. He will sink, in the flood.
“I like...yeah.  Yeah. I like these silences. Silence is beautiful... I bet that I can hear your heartbeat...” The balloon squeaked. The balloon rattled in the wind. He couldn’t hear her heartbeat.
“Oh. Oh! There, there, there! See! Ba-dum-badumbadumdum-dum-ba-dum!”
*
She thought about him. She didn’t always think about him. She usually thought about tea and snow and -ing. So much -ing. Watching and wearing. Yesterday was all about the lake. She threw her film into the water. Too many photos. Too many pictures. Today was all about the park. All about lying, eyes closed.
Talk kills. He couldn’t hear her heartbeat.
Ba...dum. Ba...dum. Ba...dum.
*
He thought in shoots. Of air, not plants. He was dead, dead. Caught too many times by some soul-sap camera. A hundred CCTV tapes could tell a million stories. He thought of shoots. In sterile (slightly damp) rooms, not -outs in the Wild West. And she can never know. And she can never know.
*
More silence. For ten minutes, or more. The clouds haven’t got a watch. It is unimportant.
*
“So. How are things going at home?”
A question. She had to answer a question.
“..p...hh.” She spoke like she was barely speaking. Like the wind dared to brush past her lips.
“Oh. I didn’t quite catch that. I must be going deaf.”
Blind, she thought. He’s already gone blind. And mute. All she hears is squeak, squeak. Entertaining his ears would just make more squeak, sound running like sticky fingers down his rubber face. Entertain silence. The mantra: Silence. Silence. Snip spines for silence.
“Mate.” Her voice pressed to his cheek. “I want to pop the clouds. With our minds.”  It scraped. It pierced (her, not him. He was still far too buoyant.) “So, if we just lie here. Could we just lie here?” Helium bled from her ear. It was worth it.
He built a castle with his chest.
“We never talk.”


It was necessary.
“I know about...I know about Thursday. I won’t tell anyone. I don’t want to forgive you. I want to lie here, for a while, and pretend. Can we pretend?”
The wind came. The sand was dispersed. Her words, true words, pierced the rubber. And they lay, hooked to the Velcro grass, the eyes-closed girl with a bright blue scarf, two stockings weighed down by stone, a patch of sand-residue and a deflated balloon. The clouds popped and he was nothing. Popped. In the water, in the puddle. He was nothing.