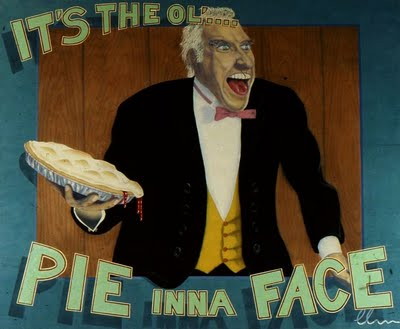 I feel more confused than an obsessive Gary Glitter fan circa 1997. I thought that my relationship with BBC comedy was strong. The Office was funny. I love Never Mind the Buzzcocks. Outnumbered is laugh-a-minute hilarious and I am a big fan of The Mighty Boosh and The Thick of It. Heck, even Little Britain used to tickle my pickle back in the day. However, it revealed its dark side this past fortnight by bringing out two godawful new shows, Miranda and Big Top, and I don’t know whether I should starve the beast that is spawning such dross or simply carry on in forcibly blissful ignorance, pretending that these atrocities simply don’t exist.
Miranda is a program about a fat woman who owns her own joke shop but all she really needs to make herself happy is the love of a good man. Well, the love of any man will do, and by love I mean a five second grope in the back of a night-bus from a dirty stranger. Yay, feminism. This was a show that should have been released and dropped thirty years ago when the BBC realised that this was just a really very cheap rip-off of Are You Being Served?. Miranda doesn’t even try to veil its smut. It believes that innuendo is telling a joke with a phallus in hand as if the viewer is too stupid to grasp that a joke about sucking could have some sexual connotations. Interestingly, the BBC have also resurrected the cast waving goodbye at the end of the show one by one. I actually quite like that, but not enough to sit through another whole episode of this bilious twaddle.
Admittedly, I only sat through five minutes of Big Top. I maintain that that was five minutes too much. These five minutes consisted of Amanda Holden (the multi-faceted actress well known for her range of facial expressions and total non-ice-queen aura) reading a poster for their circus which had been defaced by a rival circus. I don’t think that Holden knew her lines. I don’t even think that she understood that she has to interact with the other people in scene. Moreover, the entire production was shot with more botox than Holden’s forehead. It was stiff, void of personality and less amusing than the 10‘O’Clock News.
Compare and contrast with Cast Offs on Channel 4. Whilst BBC is happy to gorge on its own rotting corpse, devouring any glimpse of inspiration and regurgitating it so that every single program that it produces is tainted by the stench of its dereliction, Channel 4 is softly mocking its identity as the channel for kooky reality TV shows. Exponentially a show about five disabled adults being told to survive unassisted on an island for six months, Cast Offs is one of the first television programs that I can think of that that presents disabled people not as victims but as actual adults. The characters drink, have sex, are bigoted, swear and, unlike every Channel 5 documentary that you will ever see, function in the real world. Because of this, Cast Offs is not self-conscious. It is littered with really very amusing black humour and led by a cast of characters who the viewer can identify with. It is innovative, necessary and, ultimately, everything that Miranda and Big Top aren’t, so it is truly depressing to see Cast Offs scheduled after 11pm and Miranda and Big Top on prime time. I’m starting to feel like a lone voice against the increase in imbecilic programs on television. Help.