My Aspects of German Cinema module this week has been focusing on the rather fascinating topic of filmstars. We’ve been looking at beginning to think about star personas as “texts” we can read, which in turn tell us something about the society in which they achieved their stardom. We looked at Hildegard Knef specifically, German film star of the 1940s (although her career extended right through the century until her death in 2002) whose star persona at the start of her career engendered many of the conflicts women of the time were facing. 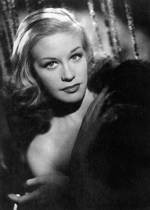 That was all very interesting and academically relevant, but one of the things I was mulling over during my reading for the seminar was the absoluteness of the star persona, and how the star’s actual individual personality is an entirely separate entity from the star image familiar to the public. We don’t know Demi Moore or Tom Cruise and so will never have the pleasure (...) of getting to grips with what they’re really like as people. Instead, what we know about Demi Moore and Tom Cruise comes from their agents in the form of promotion, from their roles in films and from other publicity pumped about by cultural informers like newspapers and gossip rags. Evidence of the star system is all around us – we are bombarded with so much information about particular stars and gain much pleasure from voyeuristically reading snippets about their “lives”, but the chances are, we’ll never meet them and we’ll certainly never uncover the real them. Mulvey calls it “an illusion cut to the measure of desire”, and there’s always a distance between star and consumer (if we’re to look at stars as products to be consumed, that is).

The reason I’m blogging about this, though, interesting as it may be, is because I’ve had my own little encounter with my own special kind of star system and it was very, very surreal! I’ve been watching this guy’s vlog (video blog) for about a year now and he’s become, in a very odd and strangely geeky way, a part of the media I consume in my day-to-day life. I get his posts automatically downloaded into iTunes, which in turn get synched with my iPod, which I then watch on the bus/train/plane/at the gym. Just as I watch Demi or Tom in video form, this is just how I see this guy’s vlog.

So when I was on iChat this evening – as I rarely am – having totally forgotten I’d added him to my list, I said hello and we ended up chatting for a bit and then having a webcam chat with voice. The quality was absolutely crystal clear and we were just having a chat about what we were doing, the usual small talk. But it was so bizarre. This person who I’m so used to seeing on my screen talking away about his life and giving me the voyeuristic pleasure associated with vicariously enjoying someone’s triumphs/failures was talking to me and responding to me. It felt like I was talking to someone really famous – a star – when in fact he’s just a regular Joe who happens to video his blogs rather than write them. And he isn’t a star. Not that many people watch his vlog I suspect and he doesn’t have the polysemy Dyer sets as the benchmark for inclusion into the exclusive star club, but in my life he’s part of the constellation of images I consume.

To have him talk back to me was very strange, like what it must feel like to have a chat with Demi about her boring Friday night, or with Tom about what pisses him off about people in the gym.

This is my blog where I talk about the things in my life that interest me. Exciting, daring, inventive? Or just another chance to lather up the suds of my ego?