Outreach activities in the School of Life Sciences Dr Leanne Williams is a Senior Teaching Fellow in our School of Life Sciences. As well as teaching across a broad range of subjects, Leanne is involved in the School's outreach activities, which have reached over 2,000 children from more than 100 schools in the last year alone. She tells us what she loves about working with young people in today's 50@50.

How did you come to work at Warwick?

After graduating from Wolverhampton University in ‘96 I started my science career working at the Sanger Institute on the Human Genome Project. I stayed for quite a number of years - it was such a fun and inspirational place to work at that time. I then decided to pursue an interest in teaching and moved to Nottingham to gain a teaching qualification. I landed my very first teaching job in an inner city FE College in Nottingham. This was the hardest but most rewarding experience.

Upon this I built the foundations of my teaching philosophy and realised my passion for widening participation and second change education. After about five years I left this to pursue my own educational challenge and studied for a PhD in reproductive physiology, specifically ovarian follicle development. Following a short postdoc position I applied for a teaching fellow position here in the School of Life Sciences…and here I am.

What does your current role involve?

As a Senior Teaching Fellow I teach across a very broad range of subjects. I also get involved in teaching and learning innovation projects, such as Digichamps, Students as Producers and transitional skills development. I’m also a personal tutor; I take this role very seriously and work closely with senior tutors and student support services to ensure that we provide the very best support for our students.

I work in close association with Dr Kevin Moffat to coordinate and provide outreach and widening participation activities - check out our new webpage. We also organise and deliver the British Biology Olympiad finals every year and have worked hard with The Royal Society of Biology and Warwick conferences to secure the contract to host the 2017 International Biology Olympiad here. It’s an amazing opportunity for the School and for Warwick!

What’s your favourite thing about working at Warwick?

The thing I love most about working at Warwick is the beautiful campus. As a biologist I love Tocil Woods, the lakes and the wildlife it attracts. I commute from Loughborough every day so I aim to get here early about 7-7:30am to beat the traffic. In the summer I’ll go for a walk first thing and often see Muntjak deer - I get just as excited as I did when I was a little girl!

I also love the progressive nature of Warwick as an institution, particularly with regard to teaching and learning innovation. I’m excited to see how the WIHEA (Warwick International Higher Education Academy) influences us as practitioners and hope to get involved where I can.

Tell us a bit about outreach activities in Life Sciences at Warwick.

Over the last year we have delivered outreach sessions to over 2,000 students from over 100 schools across the country. We now offer more than 22 activities from reception year children even through to professional development sessions for teachers.

Have there been any particularly successful events this year?

I organised a biology training day for our CPE trainee teachers, on their early years PGCE. The aim was to develop their confidence in teaching biology. We then had a second day where over 40 KS1 (Year2) and 35 KS2 (Year 5&6) children came to SLS so the trainees could take the reins. We were mini beast hunting and tracking animals in the woods, pond dipping, measuring reaction rates and making oxygen with plants - we even had an interactive live animal display!

It was amazing, chaotic and tiring but the kids were just so enthusiastic and excited and the trainees were fabulous. Some of the kids had never been into a wood before to look under a log or into a pond. All you have to do is open their eyes to even the tiniest of marvels and you’ve got them completely hooked. That’s what I love about working with young people. That innate curiosity is easy to tap into and then you just have to give them the time and space to run with it. It’s the time to inspire and influence, for sure. And that’s how we’ll get more young people to study life sciences, by getting out there getting involved and giving them positive experiences and opportunities. I love my job.

Between Snow and Stars 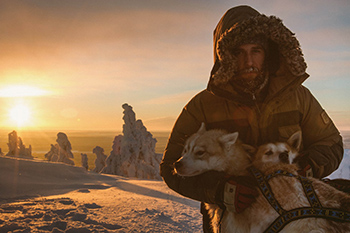 In this week's 50 @ 50 post, we speak to Warwick Business School student Tom Vaillant, who's on course to graduate in Warwick’s 50th year having achieved more than a degree during his time here. The 22-year-old from France, in the final year of his BSc in Management at WBS, has just finished producing a feature-length film set on Everest and in the Arctic, ‘Between Snow and Stars’, which he filmed alongside his studies.

Tell us a bit about the project.

Alongside studying, I’ve been working on my production company, Rockline, which was primarily founded to produce, finance and distribute ‘Between Snow and Stars’. The project brought me to amazing places, such as exploring with renowned mushers and climbers in the Arctic and on Everest. I set up the production company during my first year at Warwick.

How have you found the experience? What have been the highlights?

I’ve loved combining two of my passions on these projects – sports and cinematography. Seeing the film for the first time on the big screen at Kendal Film Festival was stressful, as it’s been such a long ride! However the hardest part was showing it to our Kickstarter backers in London, as they’ve been there from the very beginning.

I’ve learnt a lot from my experiences and mistakes; hopefully coming out of this I will have acquired a useful skill set. And Warwick has proved to be a great place to come back to!

What was the most challenging aspect?

Filming at -40C certainly has its challenges, including the danger of frostbite. I made it to 8,000m on Everest – and discovered on my return that I’d lost 20 kilograms during the climb. I spent my second year both studying and filming – I must hold a record for submitting an essay at the highest altitude!

Juggling my studies and the project has definitely been challenging, but the University has been really supportive, including allowing me to take a year out to freelance (working three jobs to fund the creation of the soundtrack and the colour grading) and complete the project.

What has being a student at Warwick made possible for you?

Warwick is very open to creating opportunities for their students. Most institutions would have outright refused my project or my request for a year out in the middle of my degree - and I wouldn't have been able to pursue my goal to its end. Instead I'm on my way to graduating with a degree from a prestigious university. For this I am very grateful.

It's very easy for students here to embark on personal endeavours. Entrepreneurs have many societies and incubators to choose from and Warwick actively endorses students’ ideas. The University has a brilliant network and was not afraid to use it to help me. WBS helped to launch my project by featuring me in press releases in France and the UK, which gave me the necessary credibility to get sponsorship.

I found that everyone at WBS was very approachable, the mindset towards these extracurricular activities is not something I can imagine finding in many universities.

How would you like to see the next 50 years at Warwick?

In the future I would like this spirit to grow, so that aspiring students with entrepreneurial ambitions will know that they are applying to a university that will not only let them carry on their projects but help them achieve them. Many industries have become increasingly competitive to enter, and will not suit everyone, so I think it’s important to keep a dynamic campus by continuing to encourage students to create their own jobs if they want to. I think incentivising this behaviour as part of a core module in some departments would be incredible!

What’s next for Between Snow and Stars?

We’ve recently secured an agreement with Outside Television to make the film available to 30 million homes in North America, which is fantastic news. The film has also been accepted in a few film festivals on the other side of the Atlantic and a teaser has been staff picked by Vimeo. I’m waiting to hear from Channel 4 about the possibility of distributing the film here in the UK.

What’s next for you?

I’d love to pursue a career in sports media production and I’m a finalist in the Red Bull Graduate programme, so I’m working towards that goal in the run up to my finals this summer. Right now, I’m looking forward to enjoying student life at Warwick for my last few months on campus!

Watch the trailer for Between Snow and Stars below and look out for it on the Big Screen Piazza from Friday 6 February. You can see more of Tom’s award-winning images here or on Instagram @tomvaillant.

Would you like to be featured in our 50 @ 50 series or know someone who would? Get in touch at 50th.anniversary@warwick.ac.uk.