Reflections on the 50th 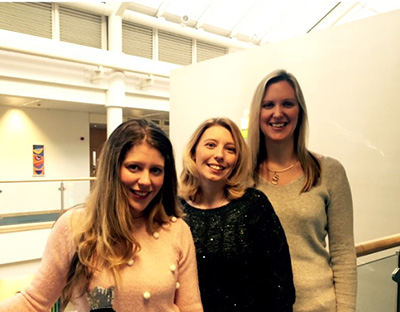 As our 50th year draws to a close, the anniversary project team - Nicola Hunt, Emily Little and Christine Fearn, from External Affairs - share their thoughts on what has been an unforgettable 12 months.

What was your overall experience of the year and being part of the 50th team?

Emily – The whole year from start to finish was an amazing thing to be part of. The variety of projects and events we covered from December 2014 onwards really meant there was consistently a lot of energy and creativity in the team and we thrived on the challenges. Looking back now the inevitable stress of putting on such high profile and public facing events was worth it and the laughter and support I got from the whole team carried us through and bonded us into a strong team.

I enjoyed coming up with the ‘light bulb’ visual identity with its vibrant colour scheme and then seeing it used in so many creative and imaginative ways throughout the year – from the giant billboard outside NAIC, the flowerbed outside the MRC, on dinner invitations, on aprons, on flags made by the international alumni for their reunions and even printed onto edible rice paper as part of a dessert (thanks to Graham Crump!).

Christine – My overall experience was very positive. The 50th team was really small so we all had the opportunity to get involved in every aspect of the planning and delivery of the celebration. It was great to be able to showcase some of the excellent work being done in academic departments at the festival, whether that be through the engaging talks and debates or the hands-on interaction in the Discovery Zone. I also really enjoyed hearing what departments around the University and our alumni were doing to celebrate. They really embraced the ‘Imagining the Future’ theme and held some great events.

Nicola – It’s been great! For me this project began in September 2013, and from then onwards it gathered pace to all but sweep the rest of my normal job aside. I’m really pleased to have had the opportunity to be involved in something so wide-ranging and ambitious. We set out to celebrate the 50th in a very forward-looking way (it would have been easy to wallow in nostalgia!) and I think we’ve managed to strike the right balance, and done it in a very Warwick way. The 50th team quickly developed into a strong team, and I’m proud of what the team achieved this year, especially as there were only three of us!

What was your best moment of the year?

Emily – So many to mention... From being proud to hear the poetic voices of the young IGGY members and their student mentors carried across a spellbound Butterworth Hall at the Gala Dinner, to seeing the smiling, lit up faces of the first group of the 900 year 6 schoolchildren that entered the Discovery Zone with ‘wows’ and ‘cool’ on the schools' day of the Festival of the Imagination.

From working with and meeting some fantastic people, including alumni Torin Douglas and Serena MacBeth, inspiring chef Vivek Singh and screenwriter Andrew Davies, to finally seeing my creative vision of the Discovery Zone come to life with such vibrancy and energy from the thousands of visitors that passed through the doors and the wonderful, enthusiastic Warwick academics and volunteers that worked so hard over the whole Festival weekend.

Christine – My best moment of the year was the schools' day at the Festival of the Imagination. This had been one of my key projects and I was keen to ensure that it ran smoothly. It was a great example of how teams across the University can work really well together: security took charge of the school buses' arrivals and departures, the Arts Centre staff ensured that the children were ushered around the Arts Centre calmly and safely, we collaborated with the Centre for Professional Education so we could have 100 PGCE students to help us on the day and the University events team helped the 50th team to manage the day and ensured timings were kept to. There were so many other people involved too and I was so grateful for everyone’s help and involvement.

Nicola – I don’t think I could identify a best moment (unless you count the lie-in I had the morning after the Festival of the Imagination finished!) There are so many highlights! From launching the year in a transformed Butterworth Hall with an event that was not only a dinner, but a full production to 200 guests of the University, to spending a week at Cheltenham Science Festival in the Science Faculty marquee engaging with thousands of visitors excited by science, to the Royal visit by Princess Anne, through to the Festival of the Imagination which I can’t really sum up in just a few words… There have been so many high points, and they’ve all come about through great team work and collaborations across the University.

What has been the most challenging part of the year?

Emily – Not sure there’s been too many bad moments, although the most emotional I’ve been was watching the National Grid Discovery Zone being dismantled and feeling like the year had come to an end.

Christine – Definitely the week in the run up to the Festival of the Imagination! I wasn’t quite anticipating the amount of last-minute changes there would be, the schedule was being amended right up until the last minute.

Nicola – I’m not going to say it was the worst moment, but there was a special kind of realisation that dawned on me after the initial excitement of hearing that we were having a Royal visit, when it hit home that that visit was only 10 days before the Festival of the Imagination… Let’s just say I’ve never known a workload like it…but it was totally worth it, as that was a really special day to be part of.

What will you take away with you from this experience and would you do it all again?

Emily – That it takes a fantastic team effort to pull off what we did. There really is nothing like team work. That our academics and students really do step up when it comes to engaging with the public and they constantly made me feel proud to be part of the Warwick community. I would definitely do it all again in a heartbeat, yes! With lessons learnt and the knowledge that there is still so much more to Warwick and what we can share with the public, our staff and our alumni, another Festival would definitely be something I would love to be involved with. I certainly won’t forget this 50th year in a hurry.

Christine –It was such a great experience being part of the 50th team and I have learnt so much, so YES, I would love to do it all again!

Nicola – It’s been really apparent throughout the whole planning and delivery of the 50th that there’s great enthusiasm across the University to reach out and share what we do with the wider community, and there is also an audience out there willing to engage with us to find out more. I’d do it all again in a heartbeat.