Student views on the 'How 2b AIDS Aware' CD ROM 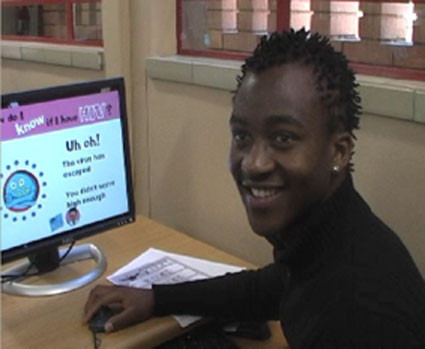 During the pilot of the CD ROM 'How 2b AIDS Aware' in Durban and in Soshanguve I interviewed as many participating students as possible to get their views on the CD ROM, HIV and AIDS and the promotion of AIDS awareness through multi–media. Here are some comments:

"I would like to use this CD ROM again. My younger sister would like it  we could watch it together and chat about it." Female student, Durban

"Learning about HIV and AIDS on a computer is much better than being taught by a person, you can understand it better. Because it isnt a person standing in front of you where youd have to disturb this person every time you wanted to ask questions, and you might forget the question if you wait until hes finished talking. On a computer its easy." Female student, Durban

"I'd like to see less animation and more real life, based on real characters, people, maybe actors or something like a film." Female student aged 20, Durban

"The CD is very nice, especially because it has diversity of people and it makes you think about HIV and AIDS in a different way." Male student aged 21, Durban

"The CD ROM could help me help my community. We might start some projects teaching people and we could even go to rural areas to teach people how to prevent themselves from getting HIV." Male student aged 22, Durban

"The most impressive thing about this CD is the fact that it is educational, its user-friendly and its younger and older generation. It can be marketed at schools. Its not too graphic, its better than bringing out condoms  I heard that condoms were going to be brought out in secondary schools. I dont think that is a good idea because youre telling people, you know what? Go out and do it. With this CD children can become educated. Thats why Im a peer educator for HIV/AIDS, because I want to help and because theyre the next generation." Male student aged 21, Durban

"I think the CD ROM is very good because one of the problems that we come across as peer educators is the material we use all the time. Its pamphlets and books and most people dont like reading. So when they see this theyre going to be very impressed because it talks, its a cartoon and people like cartoons  I personally love cartoons. So I think its a very good idea and people are going to like it and its going to make our work easier than before." Female student, aged 22, Soshanguve

"Learning about HIV and AIDS through a computer? Actually its a good thing because we use computers a lot and its easy when youre on a computer, youre learning at the same time. Youre part of it, its like youre participating. So its really good. You know, sometimes its not easy to just take a book and read it but when you see the cartoons its much more interesting." Female student aged 25, Soshanguve

"This CD ROM is something that is so simple, so small that you can use it any time you want to use it. You can use it on your own if you want." Male student aged 22, Soshanguve

The brilliant organisation Butterfly Works focuses on developing innovative and creative solutions to social problems all over the world. They integrate ethics with aesthetics and many of their projects utilise interactive media.

Their internet based project The World Starts With Me is a digital curriculum concentrating on AIDS awareness and sexual health for young people. Used in schools in Uganda, Kenya, Indonesia and Thailand, it addresses issues such as gender equality through a range of activities which encourage the use of ICT skills.

At the begining of last month I travelled to South Africa to pilot an interactive AIDS awareness CD ROM entitled, 'How 2b AIDS Aware'. I co–designed the CD ROM alongside Jeanette Clement for the non-profit organisation Tabeisa (Technical and Business Education Initiative in South Africa).
You can view screen shots of the CD ROM in the 'How 2b AIDS Aware' gallery. The CD ROM was based on Tabeisa's 'How 2b AIDS Aware' book. After the book was successfully received in many universities in South Africa, Tabeisa started to wonder whether they could replicate this information in a more interactive and dynamic format. Thus the CD ROM was created.
Based on a classroom scenario, the CD ROM follows a group of students as they learn more about HIV and AIDS, including what HIV does in the body and how to protect themselves from the virus. There are also quizzes and games available at the end of each chapter to enable the students to test what they have learnt.
Piloting of the CD ROM took place at Durban and Soshanguve in South Africa (see the photographs in the Pilot Photographs gallery) and the response from the students was very positive.
My MA dissertation will be partially based on this pilot study as I am investigating the possiblities new media has for promoting AIDS awareness in South Africa. I am really interested to hear anyone else's thoughts on this topic so please feel free to comment. Thanks!

I am currently a post graduate student at The University of Warwick, studying International Design and Communication. I have recently set out on my own as a freelance Graphic Designer, under the company name Ivy Leaf and I work mainly in the non–profit and public sectors.

I also love writing and write for Channel 4's IDEASFACTORY website and their creative digest, TEN4

Tags: All About Me IDC |