Just finished reading Mobius Dick. I thought it was brilliant.

I saw this and it made me laugh: 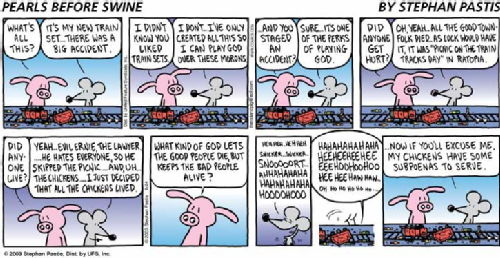 I've now heard Robbie Williams' new song approximately six times since it was released yesterday. I've heard it at home, going to and from work and in a shop. I also saw its 'First ever showing' on TV at the weekend in an ad' slot. A little bit of overkill perhaps?
I see Paul McCartney has termed Mr Williams 'overrated'. I know Paul McCartney has received a lot of criticism over saying this, but HEY, I think he's right. Robbie Williams IS overrated! He just stands out because of the lack of competition in this niche area of the pop market.

I saw Mariah Carey's new video on B4 this morning and it actually made me laugh out loud. It's just so Silly (did you see the capital S?) She's now become the most successful female 'artist' in the history of the universe and everything ever ever!
Ms Carey (not to be misread as M Scary) has now taken to flailing her arms about whilst contorting her fingers to all the Cardinal points. The end result of this makes it look as though she is attempting to hug several ghosts a la Emimem and several other gansta huggers, whoops I mean ganster rappers! This is all deeply unsettling.
I'm still trying to work what the reason is for Mariah Carey.

I went to the Arts Centre at lunch time to mill around. I was overjoyed to discover that (what seemed like) hundreds of school children had coalesced outside Sozo in order no doubt to do something productive, although whilst I was there, screaming in the highest possible register seemed to be much more preferable to them. School children being what they are (and not what they should be: namely, seen and not heard, or rather, neither seen nor heard) proceeded to split the ear drums of every adult present – and students also! (Ooh sarcasm – nice!)
I noticed that the coat rack was open and I immediately thought of the time I went to the Hummingbird in Birmingham (as I used to most Saturday nights) and was having a discussion about the Devil with some of my friends only to freak them out ten minutes later when I handed in my coat to the coat rack person and got the number 666 ticket. I found this highly amusing although my friends shot me suspicious glances all night and stayed clear of me, thinking perhaps that I was going to get trampled by a marauding elephant, crushed by a malfunctioning helicopter or mauled by some rottweiler or some other such demonic force.

Yes, I've had a bad day just in case you haven't worked that out already.
This was not helped by the dippy dolt that put her coat on my rolled up map in the toilet on the shelf, whilst I was drying my hands. Many hours spent putting this map together! It could have been nasty.
In defence of her though she did seem genuinely stupid and you simply cannot get angry at stupid people can you? Staggering!

It's been a bad day.

I fell in love with Stephen Gill's photography a while ago.

He specialises in capturing images of everyday life – a kind of still image documentry if you will, and often asks us to question what we cannot see.
He often catches ironic images that we take for granted everyday. My favourite collection of Gill's which capture brilliantly the 'sparkling' and bright fascade of the advertiser's favourite, is the billboard.
We (for the most part) see only the front; the reverse however reveals something totally different. 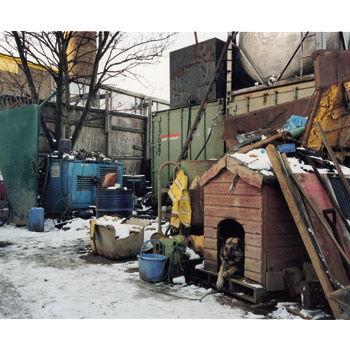 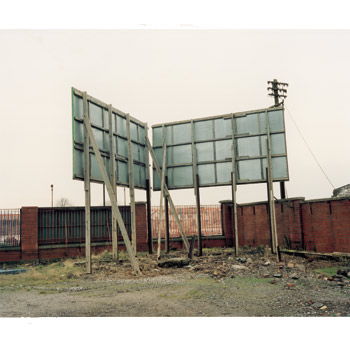 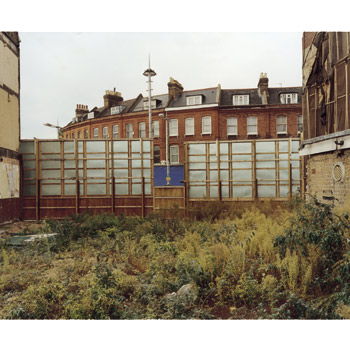 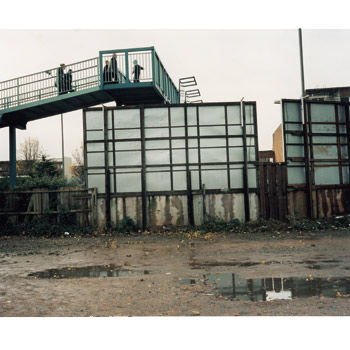 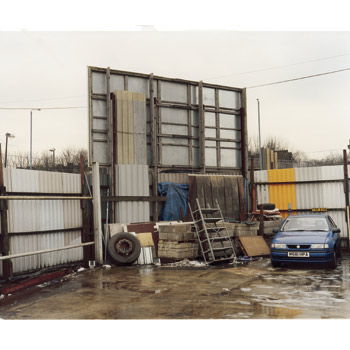 L'Oreal Paris. Because you're worth it.

What I find so intriguing about Gill's work is that it constantly challenges us to redefine our assumptions about things we think we know the answers to. What are our schemata for judging things based upon – past experience.
You cannot assume things and always expect them to be correct just because they are most of the time.

Consider the following link
Ask yourself if you know what kind of people they are. Could you guess what is in each trolley? Do you REALLY know?

People on a train – link –
We all see people like this everyday and don't give them a second glance yet make instant assumptions about them based on their appearance or their demeanor.
Who are they?
Where are they going?
Where have they been?
Are they upset? If so, why?
What are they thinking?

How accurate are our assumptions about them?

While I was in Brighton I spent a few hours sitting on the beach in the dark on my own just watching and listening to the breaking waves.

At some point during these few hours I decided that Brighton Pier was a garish Victorian monstrosity. 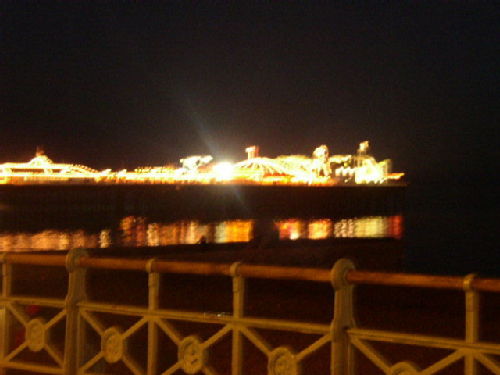 I considered the West Pier much more interesting 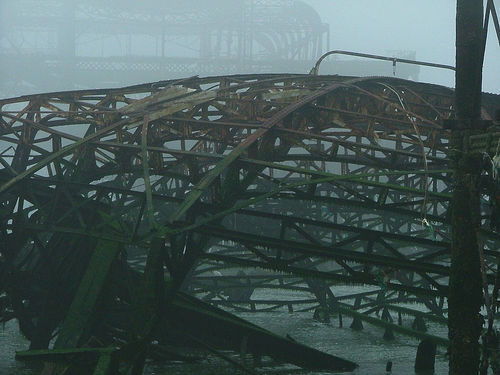 Last week I was on holiday. I went to Brighton, a place that I’d never been to before. It was okay.
When I was coming back and about to enter Brighton Train Station, I thought I’d buy a Big Issue as I tend to do. The seller stood up when I approached him with my purse and it was clear I intended to buy the Magazine.
Before handing it over and accepting my money the seller got very serious and said to me in a most conspiratorial manner:
‘Can I just tell you, BEFORE you buy this, that when I was younger my father routinely raped me?’
I stood for a few moments looking at him and said ‘Why are you telling ME this? He then repeated more or less what he had just said about the mental torture he’d endured at the hands of his father. I thought for a moment he was trying to get a reaction from me and looked at him trying to ascertain why he was telling me this. Was he reaching out to me? Was he pleading for help? Was he just playing a stupid game? Maybe he wasn’t ‘all there’. My question was partly answered when he next asked:
‘Would you believe me if I told you I had the name and address of every paedophile in this country?’
‘No not really.’ I said, getting slightly vexed.
He mentioned something else, which I really cannot recall now but was as meaningless as his previous utterings.
‘Actually, I just wanted a magazine…....’ I said and was about to say ’.....not a f*cking lecture’ when I stopped, rememberig that I was a female alone in a strange place standiing in front of a strange dude who was clearly insane and might go beserk if I said this. (Funny how I get older and can now control my tongue much more than in my younger years).

I got on the train and settled in for the three hour ride back to Leamington and decided to get on the ‘Quiet Coach’ as I wanted to read my book and listen to some music (on my headphones). Now this compartment has signs on it saying ‘no mobile phones’ and ‘Quiet please’. before we set off the driver of the train said over the loudspeaker that mobile phones were not to be used in the Quiet compartment.
So, five minutes into the journey the man behind starts talking to his girlfriend/boyfriend about what to have for dinner, the girl opposite starts chatting away with no regard for the signs or the other people on the train. To top it all off, four very loud people got on with a stereo. Yes, a STEREO. They were only going for one stop but were lauging, singing, talking very loudly and played their stereo. No members of staff told them to turn it off or be quiet.

I just kept my headphones on and listened to Philip Glass alone in my own world.

A quote that seemed apt at the time:

Hell is other people – Jean-Paul Sartre

A quote that I like that seems to sum up my attitude to myself and others:

The environment is everything that isn’t me – Albert Einstein

A friend of mine – Rachel Hitchcock– told me a funny thing recently.

She is a teacher of young children and is of course referred to as Mrs Hitchcock by her class. One of her pupils who regularly got confused between her and another teacher – Mrs Kitchen – used to call her Mrs Kitchenclock!
How cute.

Today I had a wonderful lunch–hour.

I sat in University House Atrium facing the hanging artwork (there are 29 rectangular pieces you know, I counted 'em!). I sat on the leather chair with a nice salad sandwich and coffee, reading my book (currently reading Brighton Rock) and listening to firstly, Echo and the Bunnymen's 'Ocean Rain' and secondly Fiona Apple's 'When the Pawn'. Then after 45 minutes I put my book down and people–watched.

What a brilliant lunch time I had.

I see the film 'Ring 2' has been released on DVD.

The vacuum that my housemates and I use (mostly me (well, ALWAYS me actually))is an Electrolux and must be decades old, well okay then, at least 20 years old. I was using it earlier this week and read (out of vacuuming boredom) some of the things that were written on it – i.e. maker's name – Electrolux, vacuum model – its an Elite! An oxymoron? I think so, anyway I digress.
Upon the vacuum was a sticker that Electrolux obviously thought to be clever and all pun–ny – 20 years ago maybe but not in 2005: