THE PLAY TO SEE (next week Wed 17th – Saturday 20th) – and I'm not just being biased cos I'm in it. I really love this show- its rocky horror meets cheesy cool 60's music- and the gay guys in it are sooo funny, no number of rehearsals decreases the humour.
Yes my costume isn't he most flattering of things to wear (nuns r us comes to mind) but as a whole its a great piece; the dances are really good, except mabe the ones i have to remember, the songs are amazing and fun- dan and megs and the whole crew have such talent, Luke's skating is impressive too (me on thos skates would last all of two seconds) so well worth it!
THE OFFICIAL PAGE
love MKxxx

attack of the epidemic

I have mumps and it sucks and whats worse was i started getting the symptoms monday so went to the doctor on tuesday who said- no u don't have mumps ur just ill. so i went home and did as he said, rested etc, expecting to get better- and today i look like a huge hamster- and i go back to a different doctor and hes like yes this is sever mumps; so dumb ass doctor one was wrong and now i'm scared i could have given it to people. I really have little faith in the health service sometimes, they do get a lot of things wrong, or maybe its just me.
i admit this term hasn't been good for me i'vebeen pretty much ill since i arrived but every time has been real illness and the doctors i think think i'm being a hperchondriac or something. Anyways there are 3 cases so far in my building so we're all confined to our rooms for 10 days til its gone. some people are going home but i;d rather sit it out. I'm actually a bit worried about mising lectures etc, don't want to let people down, but then don't want to give everyone mumps as well! Anyways best be off, feeling dizzy so may go to bed- but sknny for not having eaten for the past 3 days!
love MKxxx 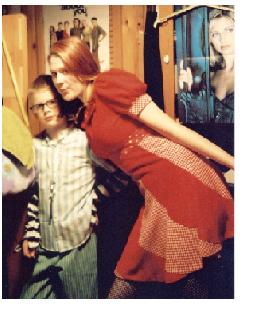 Hey there, this is a picture of me and my bro in my 60s dress, i want to wear it to boogie nights tomorrow but i don't know if its suitable or not, what do u think??

sexiest man- here he is!!! So anyways lets all sit and worship him at the end of a VERY long SST1 lesson full of lots of entries!! I'll put some more pics up later!

*Best Seating:- Near the front- where you can see all of the action and your view is not blocked by other people.
*Worst Seating:- High up where you can not see the action clearly and are not involved at all.
*Physical conditions then:- Cramped, crowded, alking, eating and drinkng. Viewers could heckle and make noise, get up and leave, come and go as they pleased, at all times of the day
*Conventional conditions now:- Quite and sombre atmosphere, in the dark, people do not make noise, each person has their own seat and individual space.

"If someone beside you sobbed or shuddered or trembled, you would feel it directly, and a wave of physical reaction could pass like an electric shock through all your neighbours . . mass emotionalism flourishes in compact crowds of that kind." – W.B Stanford

the stage and spacing

Centre stage lends itself to being able to be seen by the enire audience and has a focal point to keep the audience's attention. choreography can be staged symmetrically making it aesthetically pleasing and enjoyable to watch; choreograph would be easier based around the centre of the skene also.

However being closer to the audience in the orchestra increases the intimacy and therefore empathy created by the audience for the action on stage. It involves the audience more, whereas standing by the central back of the skene distances the audience; there is less space though for the chorus to move in, and the movements would have to be more restricted as a result.

ii. The spacial differences can affect the meaning of the scene; for example empathy could occur between certain characters and the audience which may not have happened if the actors had been placed further back nearer the skene. It means that the audience will react differently to subsequent scenes as they will be able to relate to certain characters' viewpoints better and may have a biased view because of this.

The phlyax vases, as they are known, show a raised platform, varying in height, resting on wooden posts, with a decorated rear wall made from panels of wood or canvas. This backdrop often had a doorway opening onto the stage through which the actors would have entered, and occasionally had window openings that may have been employed for comic purposes. The space behind the backdrop was probably used as a tiring area, and also to store stage properties. A short flight of steps, varying in number from 6–8, stood at the front of the platform, suggesting a stage height of approximately 1 metre. Draperies were often hung from the edge of the stage to the ground to mask the wooden posts on which the platform was stood. The vases indicate that both the stage and the ground around it was used for performance, as many depict actors climbing the stairs leading to the platform or stood apart from the stage looking on.

The phlyax stage sometimes had a small stage cover protruding from the rear wall over the stage, held aloft by wooden supports attached to the posts of the main structure. These supports were usually decorated, often to resemble one of the classical orders. Other stage properties depicted on the vases, include small porches and alters, baskets, chests, tables, weapons and chairs. It is undetermined whether the stages were permanent or whether they were temporary and the property of travelling troupes. The stages appear very simple in structure implying that they were capable of being dismantled and transported. However, some scholars have argued that the stages were depicted in a simplified manner because of the limited space available to the vase painters.

The phlyax plays were mimes, and were mainly performed in the Greek colonies of southern Italy and Sicily. The subject matter of the plays was either the parodying of myths, especially the way in which myths were presented in Athenian tragedy, or depictions of comic scenes from everyday life. The characters depicted on the vases are usually grotesque, wearing padded costumes and tights, masks, cloaks, tunics, and armour, and the males are invariably outfitted with a prominent phallus.

This is the Theatre of Dionysos on the south slope of the Acropolis in Athens, Greece. The site has changed significantly over the two-and-a-half thousand years, since the days in which it first began to be used as a regular site of theatrical performance and the model that you can see here is a reconstruction of the theatre that was developed during the Lycurgean period (338 to 326 BC).

The Lycurgean theatre was the first at this site to make use of stone seating; it was also the first to develop significant stage buildings also constructed in stone.

As one looks down from above in this birds eye view, one can make out the skene, paraskenion and other stage buildings at the bottom of the theatre complex (they are the red-roofed buildings roughly in the middle of this screen). One can also make out the three separate segments of seating that existed in the Lycurgean theatre (the lower, middle and upper cavea) and the walkways (or diazoma) that separated them.

To the right of this viewpoint, the Odeon of Pericles can also be made out (it is the grey building with an octagonal opaion at the centre of its roof). This covered theatre structure was constructed in the 5th century BC and was also used for certain performances, as well as for rehearsals and other aspects of theatrical preparation.

The Lycurgan period staging means that only one set can be used at all times as it is a stone structure whereas the Phylakes skene can be modified, rebuilt and painted acording to the needs of each play. However the stone skene means that the actors can interact with it, move around it and use it to create a layered stage.