Early in the morning

My personal best this year. The first one to blog in the morning! Sitting in the maths common room waiting for an order to help out more. Slowly the visiting professors – workshop participants – come in. It's quite exciting really thinking that I've contacted most of them over the past few months, even though it was mainly giving them travelling info. First talk in an hour or so!

Seminars done. Prince Variety Show just finished. Perfect time for some more Barbados remiserating (sorry I just learned that word last week, have to use it as much as possible). 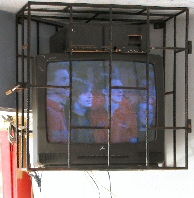 As I implied in the previous post, Wednesday morning was by far the worst time of the week. Still troubled that I'd done something horribly wrong not knowing what, I had an early night in. The Revvers singing on TV had to wake up early and we could watch them at the hotel bar but I didn't feel like it (thought I wouldn't be doing it for myself but for them). However, after we were awakened by the phone, my roomies gently forced my to get my out of bed and watch it anyway. I was too late for the main performance – which supposedly sounded great – but had another chance – as if it were meant to be – to see them finish the show with 'Jordan' (the only Rev song that can be rehearsed in 2 minutes). The tone of the morning was set however with my roomies added to my paranoia list.

The outlook was better with another workshop at Queen's College. I was still grumpy when we arrived as in the 2,5 hours since I woke up no one had actually managed to smile at me and ask me how I was doing (cannot say I had the most welcoming attitude, but usually Revvers ignore it and just shine rays of happiness to you – it's like flower power without the drugs). I have to apologize to Esther here who happened to be that first smiley person but got all my bottled up grumpiness over her. Sorry. Anyway – we arrived at the school and soon started singing, and as soon as we started our second song and I saw the innocent joyful faces of the kids there was no inch of any way on this planet I could even pretend being unhappy. 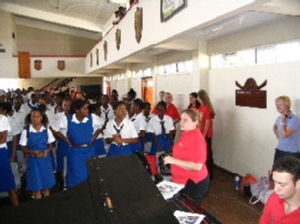 By the time we did the 'Little green frog' warmup I even agreed to jump on stage and show the silly actions – that's how drunk with happiness I'd suddenly got. Gerrard (same as before, SU [Students' Union] officer) had a special way of making the kids even more receptive to our presence, challenging them to be more enthusiastic than their rival colleges we visited before. It certainly helped.

We'd planned out to teach them 'Pass me not' – our fastest-paced song – and by the end of the workshop each and every one of them was singing along (quite impressive as you usually get some kids too shy or too cool [or awesome] to sing with us). Whilst singing the song a few of the boys got so excited they got up on their chairs and started grooving showing us some good Bajan clapping techniques, and finished the song with some grunting noises of encouragement.

Those in charge must have liked it as they offered us a bit more time to do another song. Thank God for the genius who decided to teach them the chorus to 'My Redeemer Lives'. We already tried it in another school and it seemed to catch on, but here the kids got it in one go and voila some of them got in front of the choir conducting it even. Soon the groovy clapping resumed and we were taught some kind of thunder clap to enrich our marginal movement library. We performed the song together with the students and everyone was smiling dancing and clapping – definitely this morning had given me the best experience of the week as well!

The madness wasn't even over when we finished the song! After the staged thank you's of the principal and the class president, one of the new 'conductors' ran to the front, got on his chair – encouraged by the rest of the students – and started an enthusiastic speech thanking us for sharing our songs with them. As if that weren't enough, all who didn't had to go to class sticked around and asked us for autographs!? This seriously turned into the most bizarre day to date i).

I suddenly realize this was a more action packed day than I thought it was. I'll stop here and put the afternoon and evening stuff in another post!

i) Please remain posted for the prize for most bizarre day of the week might be claimed by another...

Though the folks from the Ribits choir (Revelation in Barbados in the Sun - a 'pick n mix' of people from various Revelation choirs in the UK) were staying in the same hotel as us, we hadn't been able to meet up till Monday night after the reception. Today - Tuesday - again we suddenly had a busier schedule than expected visiting two schools, but it was well worth it!

In the first school we sang a few songs in a huge open air hall during the morning gathering. The kids were a bit reserved but seemed to open up as soon as Jon (Finnis) started his solo for 'Lean on me' – we got a fanclub going on there I think! Although personally I'm a bit tired of singing that song, apparently it is a crowd pleaser as with the next school we visited again the kids started to cheer up as soon as they heard the first chords of this tune.

As soon as we got off the bus, we were greated by the students of the second school (Harrison College, I believe) who wanted to invite us to their afternoon prayer. Unfortunately, we couldn't stick i) around that long, but it already showed the enthusiasm these kids had for a bunch of weird English (generalisation, I know) people singing at their school. I kind of forgot what we did exactly at this school, but I think we first sang a few songs for some students, then waited for an hour chilling in their (not so much open air) hall singing and rehearsing our songs, and finally sang some more songs for some more students and actually teaching them the parts to one of our songs! The workshop (teaching the song) was great – it was hard to get the students to actually join in, but as soon as you got a few enthusiastic kids, the rest joined in as well! Seeing them groove to 'My Redeemer Lives' really puts a smile on your face!

Before everyone'd pass out we were treated on some well fried chicken wings with BBQ sauce and cold water. I was planning to go and see some green Bajan (from Barbados) monkeys but was a bit too tired by now and more up for a swim and meeting the Ribits folks. Which is basically what I did, chilling in the afternoon on the porch listening to them rehearse their songs. As they are from different choirs, they hadn't had time to rehearse any of the songs before they came to Barbados, and even though they'd already had two concerts, they wanted to do well in the final (supposedly big) concert with us. It was a great way to spend the afternoon and really got me into the relaxed-man Bajan mood!

The relaxed-man Bajan mood was soon over however, as we were told that not all of us could go sing on telly for Good Morning Barbados! Luckily I was allowed to go as I knew the song (a lush version of 'While Shepherds Washed') but had to gamble my place and lost, as for some obscure reason I thought 1 was the luckiest number in 1,2, and 3 (I know – whoever picks 1?!). Was a bit down for the rest of the night, and to make it worse I felt like everyone gave me the evil eye for the rest of the night and the next morning (it's hard to keep this angst-free sorry!). Even the most beautiful sunset in the world couldn't do anything about it, though it gave me something to do for 30 minutes.

I tried to get over myself and listen to the selected people rehearse for the TV show. Didn't really help but took some more pictures. Had a great dinner – pot-bellied flying fish, fried, so basically fish and chips – and some good drinks, plus a night on the beach and swimming in the sea to close off the day. Since drunk swimming at night isn't the brightest idea ever, I decided that no one was allowed any further in the sea than me, though Mar'yn nicely observed that everyone had to be at least to metres on shore as that was where I was standing making the statement… Ah well, at least chasing the crabs on the beach was fun!

i) Literally stick, as it was some 30-odd degrees and we were inside. Obviously windows could open but the draft changed direction every other minute so it was hard to remain cool.