Killing in the name

Holland is a perfect example of what happens when there is no governing moral standard. The Dutch have decriminalized most drugs and people smoke dope openly in venues set aside for the practice. Prostitutes display their wares like mannequins in department store windows. And now we have at least one hospital murdering already born babies because someone has decreed them unworthy of life. Read here

Let's have a look.

The Dutch have decriminalized most drugs
Oh dear! Drugs… Let's assume you don't mean medicine, but the kind of stuff you don't get from a drugstore. You probably don't mean alcohol or tobacco either. Fact: so called coffeeshops are allowed to sell 5 grams of cannabis [weed, dope, grass] and as a result the posession of such a small quantity is tolerated.
Actually, of most drugs, only cannabis is tolerated, and in very small quantities. Turns out that coffeeshops are prevalent in Amsterdam [mostly occupied by tourists, though] which makes people believe you can smoke all the dope you want. But no.

Prostitutes display their wares like mannequins
Not sure what you've seen, and what you were looking for in the red light district. Yes, that says district – there are zones where prostitution is allowed, making up a wopping 0,00001% of the city centre [figure subject to author's abuse of mathematics] and there's no other reason to be in those zones but to have a look at those mannequins.
Also, none of them display their wares, for what would be the use to show what you've got when people can just stand outside looking at you without having to pay? So much for a job. It's just women with strong make up on in bathing suits, smoking a cigarette is optional.

Hospital murdering already born babies
This is what it's all about. Italian minister Carlo Giovanardi is convinced the Dutch are culling all the handicapped, blind, and ugly babies to make way for pretty ubermenschen. Fox News [why am I taking this seriously?] columnist Cal Thomas believes "Dutch parliament passed a law allowing doctors to actively kill patients they deemed terminally ill".
Fact: doctors are allowed to assist patients in euthanasia. This is in accordance with a patient's right to die. It involves lots of forms to fill out, by the patient as well.
Fact: in the law, minors from the age of 12 can request euthanasia. 12–16 year olds need their parents' consent. 16–17 year olds need to involve their parents in the decision process.

The current controversy doesn't speak about minors under 12, but focusses on newborns. Eduard Verhagen from the University of Groningen started the whole thing suggesting a protocol for termination of life for newborns. While looking for more information, I came across Verhagen's latest article [abstract]:

In the Netherlands, as in many other European countries, the majority of deaths in newborns are preceded by end-of-life decisions. In most cases, these decisions concern the withholding or withdrawing of treatment. Drugs with a potential life-shortening effect are often prescribed in the terminal phase of treatment of newborns to alleviate their suffering. The use of lethal drugs in order to deliberately end the life of newborns with a very poor prognosis and intractable severe suffering has been reported by Dutch paediatricians. Recently published data about end-of-life decisions in newborns in Flanders have shown that paediatricians in Flanders also consider the deliberate ending of life in newborns and young infants to be an acceptable option in exceptional circumstances. Real insight into the existing practice remains limited because the deliberate ending of life legally qualifies as murder in both countries. Few cases are reported because of the physician's fear of prosecution. Physicians in Flanders and in the Netherlands have pleaded for a different system of control of the deliberate ending of life in newborns. The Dutch government has recently announced the instalment of a multidisciplinary committee of experts to whom all cases must be reported. The advice of the committee to the prosecuting authorities will be crucial. It is expected that this change will increase the willingness to report cases.

It seems his sole purpose is to surface these cases that currently take place in murky waters. It probably happens in Italy and the USA as well, but this doctor would like to structurize the procedure and make it more humane, and as such needs a legal body to decide on this. For an objective review, go here. Anyone taking this whole nazi comparison seriously, please try and read up on what's happening before making Orwellian statements.

In addition to the ongoing debate [see trackback I thought I'd present a picture I found here over a year ago. For those geographically challenged, it is a map of the United States of America, where each county has been given a colour according to its political flavour [blue being mostly Democrat and red mostly being Republican, various shades of purple reflect 50/50 situations etcetera]. The map is distorted, as each county covers an area according to population [presumably of the electorate] rather than size. 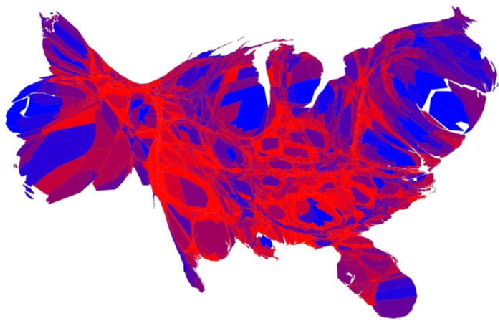 The common misconception is basically derived from the news coverage of the elections. America is not as black and white, or blue and red if you want, as presented – rather shades of purple. Large, seemingly democrat strongholds such as LA [bottom left] and New York [two blobs divided by a white line, top right] are neighboured by significantly shaded areas [interestingly enough, our beloved OC near LA, and some New Jersey counties - the Sopranos, anyone? - near New York]. Location doesn't define your political flavour, and your political flavour doesn't define your values.

When voting, I personally have to make a choice: do I want to stand for my own values, and find the party that comes closest to them, and that I can actually trust with them [good luck finding one, even in the Netherlands!], or am I going to help knock the current government out of its seat and vote for someone I might not really care about but he/she doesn't seem too bad and can't be worse than the last dude. Idealism versus realism. If I were American, I can imagine there would be occasions I'd be inclined to vote Republican. Does that make me a div [thanks Hayley!]? Should I bar my windows, for people might think I'm anti abortion or anti preconceptives? I might just be thinking the Democrats have been spending more than enough money [or made enough of a mess, considering the California power crisis. Whether or not it was the governor's fault at some point doesn't matter anymore - if a crisis of this scale isn't resolved or took too long to resolve, heads will roll by definition], or their candidate could be a complete tosser whereas the Republican for once might not seem too war-faring.

It's easy and feels safe to be able to put a tag on everything and everyone. The Democrats are cool. Their last president at least tried to sit at the table with the Israelis and Palestines. And he played the sax. The Republicans are just silly. They spend all their money on defense and it seems like they're at war every moment they've had in the White House. And their leader can't finish a sentence without stumbling over a word. Go back a lifetime or two and you might have thought differently. Lincoln and Theodore Roosevelt, both Republicans, have brought about great changes in the world and in the States - and I mean great in the sense of positive, developing [Lincoln with the Emancipation Act; Roosevelt with the Panama Canal, conservation of resources, and mediation in world politics for which he won the Nobel Prize].