If your answer involves the Union, dancing to the funky tunes of Timetunnel, not only did you probably have a good night out, you also might have witnessed a malicious act! 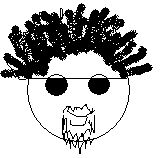 On the music side of the night, I'm still not convinced by the mixture of everything between 60s and 2005, especially when there are plenty of ace songs that don't make "Top B 3 years ago's top 10" [think Bohemian Rhapsody or I am the one and only]. Also, a bit more persuasion of people to dress up for this event to match the cool decor [including Arcade games!] and the style of music would make it just that bit more fun when acted upon. Which brings us to the afromen.

These special type of Timetunnel [or rather Boogie Nights but easily converted] visitors have made this night their own and look forward to it probably more than the football girls look forward to Score! Hence they spent some good time picking their outfits and priming their afros to look fine for the night. One particular specimen, let's call him R, always transforms during these nights [see first picture] as if times are turned back and he ended up in Austin Powers' nightclub. His afro is always in perfect condition with a good black shine on it and all the curls rounded in line. Saturday night was no difference, and with the tunes of Jungle Boogie in the background the afromen with R graced the dancefloor.

Was it greed? Was it jealousy? Or was it a mere spell of degradation? Right after another jolly photo shoot, R's afro seemed to be disappear in midair. Some shady character [m/f] managed to grab the perfectly groomed wig leaving R and his fellow afromen in despair. A 5-song-long search ended without results, and now they need your help. 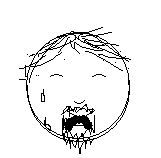 If you were on the Union dancefloor the night of Saturday 19 November some time between 11pm and 2am [Sunday 20 November by that time] and saw anything suspicious regarding the stolen afro issue [trying to narrow it down here, please don't inform me of any other suspicious behaviour, though you might want to inform the Union people, or the police, depending on the seriousness of your observations], please contact me, using the useful contact me link at the top of this blog.

In the exceptional case that you have gotten hold of the afro in question please be man/woman/kind enough to leave the wig in the Revelation pigeonhole in the Resources Room, Union North. It might sound all sound funny to you, but a low quality afro wig costs already 4 pounds. An afro groomed to such excellent condition as R's afro could be worth far more! Regardless of the cost of the wig, theft has taken place, and someone's night and future nights at Timetunnel has/have been ruined. Please do the right thing and return the afro wig to the owner.

Do note that the images do not bear an exact resemblance to R. Though if you do wish to recognize him from the images, bear in mind that the scribbly bit around the mouth is supposed to be a goatee with moustache.