I'm going to the Ukraine! Not yet, but in a few days. To stop confusing myself and my friends and family who keep on asking when exactly I'm travelling, here are the flight details:

I've found a nice cropped map of the Ukraine showing you where Lutsk is: 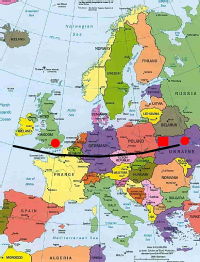 Note (follow the black line: 50 N parallel) that apart from the stopovers in Munich and Kiev (red dot, not London) I won't be any further south than London (red dot). Anyway, Lutsk (red square) is about as big as Eindhoven or Southampton and I've been told they've got internet cafés, so I recommend checking this blog once a week or so in case there are picture updates!

Nope, didn't get highlights. Maybe I should - will try and work it out with PaintShopPro (couldn't get PhotoShop). Anyway, here's what I did last Christmas:

So I can get from my sister's place in Amsterdam to my place near campus in 3 hours. Good to know. Don't worry about the mentioning of TV shows, I will work harder this term – honest. I was already in the Maths Department within the first 2 hours I was in the country!

At the end of last year, Revelation (Warwick Revelation Rock-Gospel Choir) were invited to come to Barbados in December to perform a couple of concerts. All we had to do was pay 450 quid and be available to rehearse during term time, and to be in Barbados from 6-11 December. I couldn't go at first, for I wasn't sure I would be at Warwick this year. But fortunately, I am still here, and I could join in the adventure later on! Here is an account of the first two days.

The excitement didn't surface until we were fully aware of what we were about to do. During the last rehearsal for our concerts on Barbados, Gerrard (SU officer) dropped by to give us a good idea of what to expect – workshops in schools, cocktail party with high officers in West Indies Universities and the Barbados Tourism Board, a performance on Good Morning Barbados (i.e. West Indies version of This Morning), a joint concert with a local gospel choir and our friends from the other Revelation choirs in the UK, and of course the weather forecast and the white sunny beaches!

Since we were leaving first Sunday after term (7am) many people still had to arrange some stuff at the final stage. People from Earlsdon and Leam suddenly realised there are no buses at that time to get them to Uni – interesting they depended on buses in the first place – others still needed to get sunscreen or shorts (hard to think of in December!). Yet everyone was there before the coach arrived (yes, even that person that usually sleeps in till 11am or later…) that would bring us to Manchester Airport. 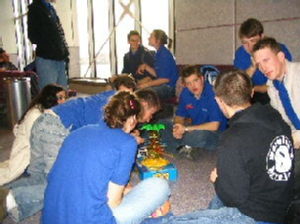 The journey was great! Despite the horrible movie selection (National Lampoon's Christmas!? There's only one Chevy Chase movie I slightly enjoyed and it surely wasn't this one! A Cinderella Story – to be honest, at least half of us [including guys] watched this simple adaptation of err the cinderella story [chapeaux to Alex who realized halfway through it resembled some fairytale he used to know]) we had enough to entertain us, and if we got bored of that, we could always start singing on the half-full plane.

I should have taken an aerial view of the island, because the first thing that came up in our minds was that it must be a Caribbean version of Holland! As soon as we had landed we saw that around the airport there already were more hills than in the whole of the Netherlands, but still. The island was also very developed and cultivated – as opposed to a mountain with rainforests around it and exotic birds and monkeys everywhere, which is what I had in mind – though lots of parts made me think of the shabbier areas of Spain or Portugal (but then with loads of green instead of red-brown).

Anyway – we arrived at the hotel around 7pm Barbados time and apart from having dinner, we didn't have much on our minds, so most went to bed afterwards. The next day (Monday) everyone was awake before 9am (1pm UK time) to jump into the sea or the pool. The beach near the hotel was big enough and the sand was gorgeous – near white and crispy as snow, so soft it was and you didn't burn your feet on it even on the sunniest day. The pool was of a good size as well and soon we invented a great game (Ianball!!!) that would entertain us for the rest of the week (though sometimes replaced by a rough version of Pig (?) in the middle – rules: there are no rules!). 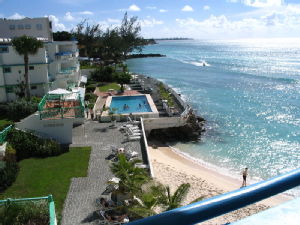 In the evening we all dressed up for a special party at the beautiful Savannah Hotel. We thought we were there to perform for important people, but it turned out to be a nice cocktail party/welcome reception organised for us! And it turned out to be not the first misunderstanding of the week. Nevertheless, despite the small audience, and the girls sinking in the grass with their high heels, we had a great performance. I never had so much fun conducting a song as there – maybe because everyone was smiling at me and sounded so good, or maybe because we were in fancy dress on Barbados! Afterwards, we were nicely treated on good food and free drinks (including the drink of the week: Rum punch!).

And this is the end of the first two days. I really need to start get into the UK mood again and have lunch at err 1pm (too late for that!). Will write more asap and more pictures will come tomorrow!