Under a deal with prosecutors, the star will serve the sentence during breaks in filming for his hit TV drama, 24.

Can you imagine Jack Bauer without the aid of a beast of a car?

There’s more where that came from!

Is it really funny?

I watched Ghost last night for the first time in my life. I’m not really sure what it was – I can see why it could be called a “classic”, as it was entertaining for most of it, but it was also a big pile of hilarious rubbish for all of it. Thanks to Whoopi Goldberg. And the crazy black thingies of hell.

And if that didn’t make me laugh out loud enough, this was one of the adverts amongst the 80s compilation CDs:

Follow-up to What else to do on a Saturday night? from [TBA]

On a search for the origins of unwarranted abuse hurled at me through the means of blog comments, I realize my blog attracts people from as far away as Australia who wish to find out what to do on a Saturday night.

Including great suggestions found in the comments, and assuming you’re not looking for a list of stuff about me, here are some ideas:

1. Start your own blog. In particular, write about why you’re doing this on a Saturday night. Your university might offer you a blog, or try sites such as MySpace, Blogger, or LiveJournal.

2. If in the UK, and in the winter months, watch X-factor or similar shows. If in the summer months, do not watch television.

3. If known to the world of blogging, try visit other blogs and tell the owner how sad he/she is. It will surely make you feel better and might save your Saturday night.

6. Plan your next Saturday night. Not leaving it to the last minute implies you can organize for friends to come over. Or to obtain necessary equipment for your new hobby.

1 Please note that this has proven to be one of the more popular options of what to do on a Saturday night. As a result, the suggestion becomes a near paradox.

I've had this blog on my favourites for a while now, and only whilst browsing through old entries I realize that the wonderful author had actually commented on my blog! I have no idea who Astrid is, or what her purpose in life is, but she has a great deal of adventures to share with us.

One extra bit of fun you get on her blog is comments from Dutch people. Now, Dutch people generally aren't too funny, but let them explain Dutch concepts and it's hilarity all around! Well, at least to Dutch people it's funny:

LoL. My son also have these oranges gloves . You get them for free with a 3-pack of 'leverpastei' from the brand 'UNOX'. For the readers who don't what 'leverpastei' is I try to explane. Leverpastei is a kind of meatspread which you can do on you sandwich. My son doesn't like 'leverpastei'. So I had to eat the whole 3-pack many working days. The brand UNOX is a typecal dutch food that you eat in wintertime.
That's more or less the story about the oranges gloves.
I guess Astrid know about this brand. Mostlikely she eat 'knakworstjes' from UNOX when she was a little girl. ;)

I'm not sure how blogitically correct it is to post other people's comments for fun, but well. I'm not talking about the language here, the sheer hilarity is in how he starts an explanation for leverpastei and ends up talking about 5 different concepts, none of which have very much to do with leverpastei, basically paté.

Go visit Astrid's site and be prepared for an adventure!

I have no idea who wrote or photographed the original. I know that Nikki sent it (amongst other letters) to me, and it seems to have been written by a kid called Jane. For you, on Valentine's Day. 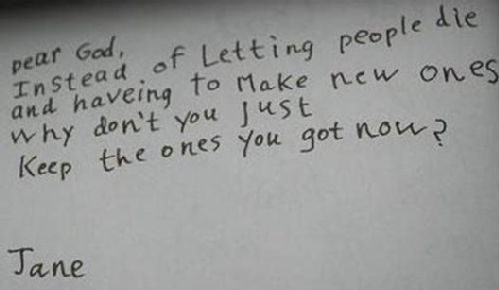 Just in case it wasn't clear, this is an entry about a novel. Jonathan Safran Foer is the author of Everything Is Illuminated [_which I'll start reading soon, and a film review can be read here

I got this book in a new year daze. My friend and I had the best new year's day one could wish for, which ended with watching 4 or 5 episodes of Grey's Anatomy, but somewhere between getting up at 4pm and going to bed at 2am, we were mesmerized for 3 hours by an amazing man. An amazing man that she [my friend] henceforth has had an "art crush" on. Anyway, that was Jonathan Safran Foer in an interview held by Kristien Hemmerechts, a well-known [in Holland and Belgium] Flemish author, but a poor interviewer.

Fortunately, Foer was well prepared and knew exactly where he wanted to go with the interview, and managed to link his fascination for Woody Allen to his fascination for Stephen Hawking. He says all the right things, and seems to have the right channels open to link his feelings to his mouth. At one point he commented on the difference between his book and the film Everything Is Illuminated. Like every other adaption, the film deviated from the book at parts, and he was asked to what extent he minded. He related the issue to a possible situation where I painter would want to paint a portrait of someone described in his book.

To paint the right portrait, the painter won't read the description word for word, but instead will find out the person's character and role in the book. Similarly, the director of the film looked at the story of which Foer's book was an image [it's all quite mathematical, really], and as the film struck the right chords, told essentially the same story as the book, Foer saw no problems with passages being left out. [Please note that I saw the interview over a month ago with a hangover, and I obviously can't tell it as brilliantly as one of the best authors of our time]. 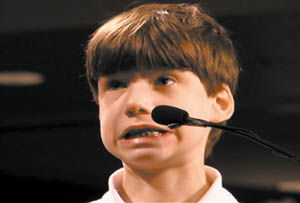 Extremely Loud & Incredibly Close is about a young boy, Oscar, who lost his dad on 9-11. He finds a key amongst his dad's belongings and the real-time story is about the boy's quest to find the lock. The link to 9-11 is subtle, and mainly appears through the boy's thoughts of how his dad might have died [was he so desperate that he jumped out of the window?] and his fears. This boy is however better described by his desire to learn, to invent, to make a difference. In that, he's so annoying that he become endearing - he actually reminded me of how Harry Altman from Spellbound was portrayed [see photo, or actually, watch that film!].

When watching a film, I expect to see wonderful images, or people or things portrayed in a way that looks into their soul. The story is generally told in 2 hours, and the director should use the medium to its full extent to let the audience understand the characters, the things, the wonderful images. With a book, the length is less limited, though every page should have its existence justified.

I've written earlier about Nick Hornby and Tony Parsons, and whether or not it's literature. Well, Jonathan Safran Foer has set the standard. Even though half the pages don't contain more than a single word, every single one of them is valid and constitutes to the body of the story. No words are spilled in vain, and the author has played with the layout of the book in order to make the literary experience more engaging – he lets you see what the characters see.

I haven't had this much fun reading a book in a while, and I would highly recommend it to anyone who loves to read.

A good history lesson shall be had by all. Begone oh George double you, for here I am, Emperor of the United States of America! [Isn't there something inherently wrong in being an emperor of a republic? I might rename it once I find the time in my busy schedule]

Which Historical Lunatic Are You?
From the fecund loins of Rum and Monkey.

Back in the day

Not sure how apt this result is. Really enjoyed the first 37% of The importance of being earnest, but can't really imagine myself being witty with Oscar Wilde. Though the dawn of the 20th century sounds like an exciting time to live in!

Unfortunately, the massive book it came in [it was a collection of Oscar Wilde's work] proved to be impossible to transport to England on previous occasions, though I might try again this time if this is truly my purpose in backward living.

The maths department is in dire need of invigilators for an exam on Wednesday 4 January. Sums up everything that's wrong with the academic calendar this year, last year, and I just notice next term [that's right, we're gonna miss 4 expensive days of uni this year!].

Starting term on Wednesday 4 January is stupid because

Anyone else? Alternatively, think of how many universities use this silly term plan, and how hard it is to organize events with other universities while everyone is either on or off term time!