The British National Party exists to secure a future for the indigenous peoples of these islands in the North Atlantic which have been our homeland for millennia. We use the term indigenous to describe the people whose ancestors were the earliest settlers here after the last great Ice Age and which have been complemented by the historic migrations from mainland Europe. The migrations of the Celts, Anglo-Saxons, Danes, Norse and closely related kindred peoples have been, over the past few thousands years, instrumental in defining the character of our family of nations.

This is the most appalling mission statement I’ve ever read. And it’s not even the message I’m concerned about (at least not now).

The second sentence is spent denying everything that is stated in the first. Since no one can actually claim to descend from the Romans or the Celts, they thought it easier to go back only a few centuries and set the bar at those who fought in the Wars of the Roses. Those were the true Brits!

closely related kindred peoples
Now what does this actually mean? Isn’t kindred the same as related? Or are they talking about inbreeding here?

Maybe not the issue, but my issue with current day right wing politics and its focus on immigrants is: lucky you. Lucky you for being born in this country that lets you speak your mind. Lucky you that your ancestors were on the right side of the border when some kings and noblemen drew lines on maps. Or that they were in a position where they were allowed to enter this country. Lucky you.

My issue is that migration is natural. As the BNP even recognizes in its mission statement, it is what made Britain great. Then why do they fail to realize its importance? What is it that makes them say: “Thanks for your help, but we’re a thriving nation now, we can do without you”?

With this in mind, the South East could follow the Californian dream and draw another line on the map and close its border for the rest of what’s left of so-called Britain. I’m sure it’s possibly to describe the “people of South East England” in a BNP-like manner, thus justifying such a break up. “You all have got silly accents anyway. But please save us some water in the summer!“

I’m not British enough to make this entry really work, but the migration issue stands. Who decided who lives where? Do the people define the country, or does the country define the people? Thank goodness for Britain your right wingers lack the charismatic leaders found on the continent. And they lack the common sense to write a proper mission statement. Let’s hope it stays that way!

Hooray I’m back in the Netherlands, and so far I’ve enjoyed speaking Dutch, riding my bike (on the right hand side, as we do), and watching Dutch TV.

On my way here I bought the Guardian to keep me entertained. I like the Guardian, now that my hands don’t end up as covered in ink as they used to. It also has an elaborate comments section, with comments that make sense. Mostly so, because there are articulate people on both sides of the fence, getting nearly a page to voice their opinion. It does make it rather confusing reading about the Hungarian “revolt” eight times in eight different places from eight different perspectives in the same newspaper.

What really caught my eye however was a letter of some sorts by Compass. It was a heartfelt cry against the current social environment in the UK, where people (feel they) have to work immensely hard to matter. Where children are modelled into being consumers as soon as they can read. You get the idea. Great utopian image of everyone gets taken care off from the day they are born until the day they die. I do encourage you to visit their website and read The Good Society, as long as you care about politics.

Cue Holland. Not trying to brag here, and I assume some Scandinavian countries are better examples, but we’ve tried to get to this utopian society from since I was born, and it’s not all that great. Last night I read the Elsevier, a magazine similar to Time or The Economist, but – as opposed to Compass with a right-of-center ideology. With the next elections in November, they thought to point out what parties won’t discuss in their programs. Key points? Our social structure is too expensive, as the population is getting more grey by the day. Our social structure makes people lazy, as unemployment benefits are more appealing than a simple day job. Our social structure is too expensive, as companies and engineers move elsewhere to avoid high taxes. [1]

Now there’s an issue. Both countries in the EU: one would like more social security, the other wants to loosen it. If only there were a market for such things.

Let me say I’m glad I live on the right side of the North Sea. Sure, social security is expensive, and indeed it does make (some) people lazy. Yet, it gives those people that do want to achieve something a better chance of doing so. Until they start making too much money and end up in the dreadful higher tax bracket. The cradle to grave utopia might be costly to aim for, but I’d rather be in a society trying to go for it, than one desillusioned and giving up on it. Read The Good Society and start dreaming. [2]

1 Elsevier, 62, Nr.37, 16th September 2006. The article also mentions the increasing immigration (though other sources – my mum – report lower immigration figures), the islamification of the country, and the money spent on the developing world going down the drain.

2 Unless you’re so far on the right you don’t even know what right is.

My sister was here. We took a few photos 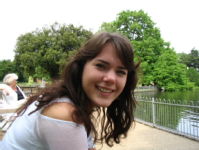 We had lots of fun and she met lots of my friends which was fun too. Now my arm hurts with fake Hep A.

Like the movie, but then different. There were nurses involved though. It was a hell of a good time - given the devilish number of 999 miles covered by the yet nameless car (as the suggestion Lily has not been approved by the owner thus far).

Note to people not interested in me - yeah you! This is a really boring entry and might only be interesting (if even) for those who were at one time or another part of this journey through the wilderness that is the North. Photos will come soon, and they will be slightly more enticing. I promise. Look: a map! 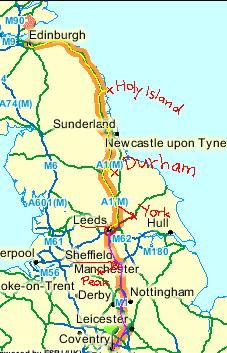 The first day led us to Leeds, where the streets have no name. Or at least no signs, which makes it hard to find your way. Still, by the power of fate, or probably the convenient location of our destination, we made it. Met up with Phil who owns the most colourfully decorated house in all of Britain, and were treated to the most organized of barbecues I have attended this year (quite a few the last 3 weeks – is there a law that states you have to have a barbecue when the sun is shining?) and played some Mario Kart. I lost, and almost turned mad racing the Rainbow Track.

On day 2 I got up before 8am, as we had to leave for the North by that time. (Note: I woke up before 10am the day before, which already made this week the longest sequence of breakfasts I had this year.) It took us about half an hour to get out of Leeds - we thought we were gone, but then suddenly the smog reappeared. We did reach the motorway eventually, just to leave it soon to get some mighty lunch food. The brilliant combination of value cheese, ham, and rolls, can also be purchased from Morrison's, which made it rise in my supermarket poll. The presence of Snickers Ice Cream bars was also very much appreciated. Refueled (us, not the car with the amazing tank and litre/mileage quotum) we skipped through what they call Yorkshire, to a magical place Scotch Corner - announced on the roads as a place bigger than London, but no more than 0 people actually live there - to leave it behind for Durham. After Leeds, and Warwick, Durham is another uni fellow passenger Ian (Mike drove the car all the time) had applied to and is also a uni with a Revelation choir. 30 Minutes on the meter gave us enough time to stroll along the river, climb up the hill to the castle, look at the Cathedral, and make our way back to the car. We even had time to take photos (which will appear shortly). Anyone who is annoyed by boring blog entries about every little thing will be annoyed even more, as I refuse to use more than one paragraph per day. So after Durham on we went and caused some traffic at Newcastle to take a proper photo of the Angel of the North. 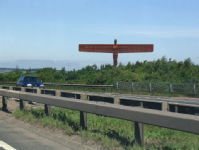 Also, Ian was in awe with St James' Park (though he didn't photograph it, which leaves a question for students of the photophile minds to answer). The obvious question was how to make this day any longer without being silly, and the answer lay on Holy Island. Unfortunately, we didn't find it, but we did enjoy our carefully prepared lunch, and saw a crab with a missing claw, 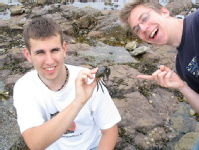 and had a twister without spilling (yet). Two hours behind schedule, we arrived in Edinburgh and all was well. For now, I'll leave you with the rest in near-to telegraph style. Dropped stuff at Josie's – Josie is nurse 1 – went to beach – had 2nd bbq – watched sunset – got cold. 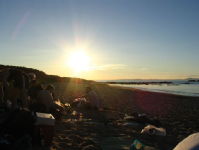 Day 5 – half English breakfast – walked up Arthur's Seat – walked to chapel – got chased by supermoms – late lunch at Favorit – rained down by rain – said goodbyes – got lost in Edinburgh (derailing from telegraph style: should have left the city by 4pm, but didn't leave till some time after 6, and the getting lost bit added another near hour) – dozed off in car (not driving) – couldn't sleep due to continuous Disney singing along happening in car – sang along with Disney – break near Washington to eat – food too expensive so bought snacks – snacks remarkably enough cheaper than at University House – on to York – arrival 2 hours behind schedule and Big Brother – hi to Hayley, nurse 2 – listened to York Rev in concert – listened to some more Rev – chat until sleep 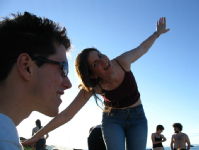 Day 6 – simple breakfast – speed tour of York (walls, prison, tower, minster, shops, walls) – lunch (hummus and cottage cheese sandwich – worth mentioning) – on to Sheffield, joined Hayley in car – conducted Mike and Ian while singing Rev songs – one wrong turn in Sheffield – 3 right turns in Sheffield – picked up Pat (Sheffield Local) – on to Peak District – met up with Big Andy in Castleton – apple crumble and custard – hike up some hill – hike down same hill but different way – desperate for a wee – bye to Andy – on to Pat's for spaghetti meat balls – teaching Dutch to UK people not easy – yes – not desperate for wee anymore – bye to Pat – Haribo – M1 south – stupid people not watching when changing lanes – turn on lights as darkness falls – A46 and A45 - Haribo fall from dashboard – Cheylesmore (not Chapelfields, although I thought it said it on the sign) – Anna and Hayley reunited – shunned by TP for missing Big Brother (again) – bye to Mike and Ian – drop off Anna – back home. 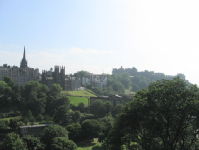 Just to clarfiy – I had a great time this week, probably even the best in a while! Seemed to have lost the ability to be as enthusiastic on my blog. So pretend I'm enthusiastic about the trip. See – that almost made this entry bearable!