Writing about Is this free speech? from Ankit's Reserve of General Mediocrity

Hence I decided on a trackback. Also to apologize in advance for possibly being pedantic. From the start.

The Danish paper MUST apologize

They have. The re-pubishing in other Western media seems to be the bigger problem.

If, however, cartoonists and Editors go out of their way to bait a religious group and then hide behind freedom of speech, then we have entered a wrong alley.

I still disagree. In this case, there was a reason for the cartoons when they were still in context. The main problem I see is that the Danish editors did not know the severity of depicting Muhammad [let alone in a degrading manner] and underestimated the impact of the images. As far as the re-publishing in other Western newspapers is concerned, I think that the ones excluding the prophet [eg. the school kid called Muhammad] shouldn't be a problem – cartoons like that have been printed for a long time and have not been cause for violent reactions as far as I know. The cartoons including the prophet could easily be described rather than printed.

Freedom of speech in my opinion is the freedom to say what you believe, and the freedom to inform [or try to persuade] others of your beliefs. If only the book that inspired the article – quite possibly ridiculing islam and the prophet in a similar way in word – were published, there wouldn't have been a problem. If it would have included the images excluding the prophet, there wouldn't have been a problem. The author would have brought his message across and the audience could have chosen to believe it or not.

The combination of the medium [an image - easily reproducible and anyone who can see it will understand at least some of it] and the message [highly offensive to some] caused this to escalate, and I honestly believe there is no reason to review the laws of free speech.

From the BBC we find Article 10 of the Human Rights Act:

The exercise of these freedoms, since it carries with it duties and responsibilities, may be subject to such formalities, conditions, restrictions or penalties as are prescribed by law and are necessary in a democratic society, in the interests of national security, territorial integrity or public safety, for the prevention of disorder or crime, for the protection of health or morals, for the protection of the reputation or rights of others, for preventing the disclosure of information received in confidence, or for maintaining the authority and impartiality of the judiciary.

The republishing of the offending images was irresponsible [knowing they had already caused a fuss in Denmark], and in that sense could be prohibited by law [a penalty on intentionally threatening local/national/global security]. I'm no Human Rights expert however, and it will be difficult to curtail such rights without losing the original idea.

just because media in Islamic countries show such flagrant hatred for Jews does not mean we demean and sully the image of their prophet in return.

Depending on your definition of prophet, either the Jews don't have one, or it will be a prophet for Islam as well.

About the cartoons: I thought only the ones describing the reactions to the offending comics were humorous. The others seemed unnecessary, and the bomb-turban actually made me want to look away.

Follow-up to In Holland from [TBA]

Nothing to do with my previous entry (although coincidentally I did ask my mom to vote for me while I was at home) [approving the 'constitution' for the sole reason that I like a united Europe and think it needs a constitution at some point anyway] but Charles indirectly asked for it. 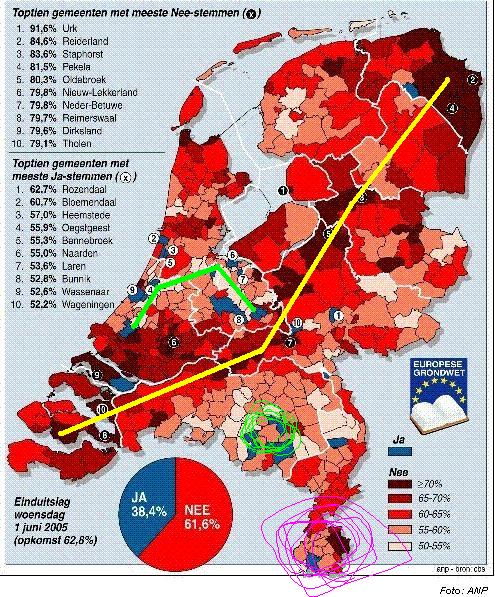 I haven't done any data analysis for years, but this is roughly what I can tell. (Closest to) Voting "ja" were the Randstad suburbs (kind of left of the middle, green line), two student regions (Utrecht and Wageningen) and some more affluent regions (suburbs of Eindhoven [green scribbly circle, is where I'm from] and Groningen).

If there's any pattern in strong "nee" votes, it would be the so-called 'Bible belt' that ranges from the South-West (Zeeland) to North-East (Groningen) [yellow line]. Throughout the latest centuries, affiliation to church has been strong in these towns, and Christian political parties gain most votes here. I personally have no idea why they would vote "nee" however (though most of these are rural areas as well, so it might rather have something to do with lack of agricultural subsidies rather than religious beliefs that drove the "nee" vote).

One surprise to me is the region in the pink scribbly bit, the south of Limburg. This region is squished between Germany and Belgium, and you would think closer cooperation would benefit the region, and I thought it had benefited from the EU so far. It's also where Maastricht is (55–60% "nee") so a bit sad that even this city couldn't reach a "ja" vote seeing the important treaty created here.

Ah well. Charles' second entry shows a somewhat irrational reason to vote "nee" which was hardly the strongest reason. The Netherlands are per capita the largest contributor to the EU (or that's what we believe), and get hardly anything back. Our political power is too small (if we compare it to contribution, not to size), and we're afraid to lose our own identity (though in the mean time it seems like 90% of new words in the dictionary come from [American] English).

P.S. Apologies for crap picture quality. Can only use paint here unfortunately.