Apart from a blatant plug on the blog-system, this entry also shows what I've been up to these days (apart from getting my second flu-strain in 1 month and catching up on C++ to model turbulence by two point vortices). Warwick Revelation are having a concert on the 5th of March at 7:30pm and I'm one of the two guys to coordinate the organisation. 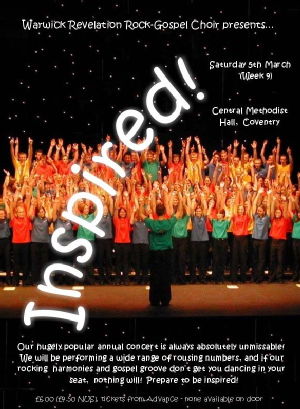 Hopefully, you recognize the poster, or maybe just the general idea, for they are put up around campus, and flyers have been handed out in the Library. If you're sure it's not your thing, then I wonder why you're still reading. If you're not sure, let me try and explain what Rev is about.

While doing my undergrad in Utrecht, the Netherlands, I joined a group of friends to produce the musical Chicago! Never seriously sung before, I decided to join the campus choir (about 20 people) as well, and got addicted by singing actual songs instead of just small bits of a verse I could remember.

When I was admitted to Warwick, I immediately started looking for musical societies. I obviously came across MTW but 1) at the time the website didn't look this great (good job!) 2) nevertheless, they seemed a bit too professional for me 3) I'm not too keen on acting (had 2 lines in Chicago! playing the cop taking in Roxy). Soon I came across Warwick Revelation however, and noticed the great songs they'd done in the past, and the excitement that came across from the colourful website (well done Ali! Not a Christian myself, I wasn't sure about the Christian-basedness, but I could always give it a try!

During Orientation Week (as a new, non-UK student) I asked around about this Revelation thing and people seemed to be moderately enthusiastic about them. Sounded a bit like a bunch of overly happy people having fun singing cheesy songs. Good enough for me!

As a 21-year old (at the time) I decided I was old enough to go on my own, but turned out to be still quite shy when entering the Chaplaincy (again as a non-Christian in a religious environment, slightly uncomfortable). However, I was welcomed immediately by a few girls who introduced me to the ancient tenor TimH, who then had the brilliant idea of introducing all the new guys to one another. Since that day I have gained a friend and met someone new every week at Revelation!

As far as the music is concerned, Revelation is a Rock-Gospel choir, conveniently one of the hardest genres to define! We'll do basically any classic pop/rock tune with lyrics not too strong for those with certain beliefs, and any gospel song with not too much an emphasis on religion for those who don't believe. The result is a mixture of contemporary cheese and classic rock with new funky gospel and soul. All sung by people who might have no talent whatsoever, but who do know how to enjoy singing and how to bring across that joy!

So yeah, organising this concert, that's what I've been up to. If you enjoyed Sister Act, you'll enjoy this. If you didn't (please tell me why – I know it's rubbish in film history terms, but still, classic!) then err I have no idea how to convince you to come (unless you like to see people swaying in colourful T-shirts and have some amazing ability to ignore our singing), but please give it a try! In any case, by having come to this point, you might understand why me and another 150odd souls join this society every year.