"But what will you do all day?!"
Behold the amazement of my dear housemate Alison.

Turns out that UNO, Mastermind, and the Guardian crossword and chess problem can give you hours worth of entertainment!

Our route went through Cheshire from Northwich (Anderton) to Middlewich, then onto Tiverton to arrive in Chester. Despite the humble amount of 20–odd locks over 20–odd miles it took us a whole week to get there and back. For some divine reason it seemed two completely different holidays, however. 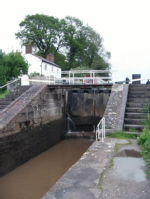 Our way to Chester was blurred by an abnormal amount of rain the southeast would be jealous of, and an excessive amount of traffic in the canals as it was weekend. At Cholmondston lock we even had to wait more than an hour for our turn! At least we learned to be patient and got to drink tea in the rain whilst chatting to other barge folk.

Despite the rain we saw lots of cows and ducklings and ducks and white ducks with yellow ducklings and nosey but not agressive swans and little cygnets. And I saw a bird called kievit in Dutch but no one knew what it could be in English so let me look it up... it's a lapwing!

Getting to Chester turned out to be a race against time, where the final staircase lock beat Pete hands down. The dude wanted to be there on time for the Watford match and I even got up at 8 to take the necessary early shifts but alas, a desperate search for water and some heavy locks slowed us down. Lucky for him, the Hornets played well throughout the match, and even those of us coming late could enjoy the unlucky second half goal. A delicious steak and speckled hen ale pie followed at the Watergate plus some quick pre–darkness shots of medieval Chester.

The last day of the first half of the week involved no barging, but still lots of water and animals, all encountered at Chester Zoo! Bats flying around our faces, giraffes swallowing their food only to cough it up again and chew it a bit more, lemurs jumping out of nowhere, chimpansees biting each other's head off, lil monkeys being smacked against big rocks, and meerkats with scary nightmares. I like zoos.

I also like lemurs. And a bit of alcohol. And bubbles. All eight of us were finally on the boat (one had arrived late, and one had been back home for a night) and together we celebrated life on water. 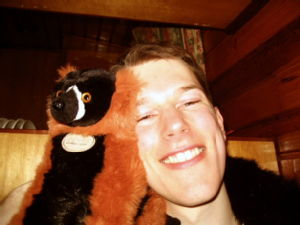 For some unknown reason Pete had the urge to buy a Kinder Egg. Through a knot in string theory, the same surprise was found at Warwick. An accurate drawing of the monster inside can be found here