The amazingly short yet surprisingly action–packed trip to the continent

I wasn't planning to go home at all until Christmas, what with a big maths conference the other week and my massive plans to do loads of work the coming term and getting ready for it, but then Ian was craving for a short cheap trip somewhere out of Britain, and I thought why not? September is the big birthday month in the family so a surprise attendance would be more than appreciated! Especially when gifts are presented as well, which I stupidly forgot this time.

Got a great deal with Thomsonfly for only 40 quid pp from Cov to Amsterdam. Only problem was that we were flying 6am on Monday and coming back Wednesday 11pm, leaving us with a taxi ride to and fro, but it was worth it! Meant that we were landed at Schiphol [Amsterdam Airport] 8am and after a quick cuppa and a train ride we were in The Hague by 10am. Times I didn't even know existed! Having lived in England for 2 years now, I also forgot that Dutch stores often don't open till 11am or even later on Mondays, and that some attractions might be closed that day. So no Vermeer or Rembrandt masterpieces for us in the Mauritshuis, but a nice walk around the Binnenhof (Dutch parliament buildings) and Resident (new government quarter) - thank goodness the weather was great! Luckily there was some art publicly available on Monday, as we experienced in the Panorama Mesdag. The main attraction here is a massive panorama painting [that is seriously a panorama, 360deg, about 14 meters high and over 100m in circumference] by the Dutch 19th century painter Mesdag. It depicts the beach and the town of Scheveningen, now part of The Hague. In the background speakers whisper the sound of breaking waves and squeeling seagulls. And yes, afterwards we were desperate to see the beach! 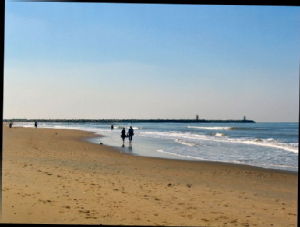 A short stop at the Vredespaleis followed first. This is where the International Court of Justice is located [Ian even thought he saw Robert Mugabe in a car on its way there! Let's hope it was a vision of the near future...] and is surrounded by a lovely garden and a great park. Not too tempted by a guided tour [with the thought of visiting the beach still in our heads, and a bit confused by the lack of an information desk] we went on proceeding our quest to Scheveningen. I shall let the photos speak for this bit [and yes, I had a lot of trouble keeping my camera steady this trip. Remember that I hardly had any sleep having to wake up at 3am...]

After a nice stroll we went on to Rotterdam to meet up with my sister and have some good food. Stopped on our way on the Schouwburgplein [some square] to see a bunch of fountains go up and down and then stop. And then start all over again. Finally managed to reach my sister and we got some Chinese food. That is, a spaghetti version of the South Asian (Indonesian) kind of Chinese food. It looked awful, but tasted alright. [For the culinary interested, it was a large portion of Bami - probably Goreng - a Loempia - sort of spring roll - and a portion of Fu Yung Hai - eggs in sweet and sour red sauce.] 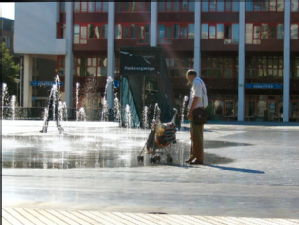 Rushed out of Rotterdam to make it to Eindhoven and stay over at my old house [parents' house] and make sure I didn't spend enough time there. They picked us up from the station in a brand new car that actually made me wanna have a car [seriously, you won't find a guy any less interested in cars. What type it was? The dark blue one...]. Slightly less impressive than the car was the tiny TV my parents had installed in the living room as an emergency replacement for what's usually there. Had my first continental breakfast in ages [at least, Ian said it must be continental for it wasn't British, and it included croissants - thanks mom!] and managed to completely mismanage time so that we ended up in Utrecht 2 hours after planned. Still had enough time to see basically all there is in the old town, including the Oudegracht [Old Canal], the Nieuwegracht [New Canal], the Dom Tower and Church [never knew the courtyard was open to public - gratefully made use of it enjoying great views of the tower and church], and… the Post Office! Hehe, not really a tourist attraction, but I usually made a detour to this place to get my stamps just to enjoy the massive hall and its art-deco interior.

Met up later with some good friends from Uni [the undergrad years] and had a nice pancake [big enough to count as a full meal] at the Oudegracht. Bit chilly and a bit worrying as a lapse of concentration could make you and your meal end up in the canal, but we survived to advance to the Neude where we enjoyed some proper beer and some additional company. Got introduced to some great new Dutch commercials [seriously, in Holland they actually put an effort in trying to keep you from changing channels!] and had a nice walk to my friend's place seeing Utrecht at night. 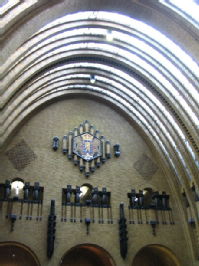 Despite specific orders, my friend failed to get us Weetabix and banana and milk, yet we did have another good brunch with chocolate flake sandwiches! Ended up in Amsterdam just after 1pm and headed towards the Anne Frank Huis - not missing the great Dam square on our way, with the Palace [old town hall] and National Monument [to commemorate those who died in WWII, now also a sign to stand still and think about human suffering and violations against human rights that happen at this moment]. I'd never been to the Anne Frank Huis, and despite my friend's negative words about long queues and crazy Americans, we decided to take our chances and were lucky - no long queues and only normal Americans. The house was indeed no more than a house, left mainly unfurnished with hardly anything on the walls [except for the occasional postcard and magazine cover Anne got from her dad to make it look a bit more homely]. I'd never read the book and it has been quite a while since we discussed this in high school, but some critical passages were printed on the walls, and some fragments were displayed in certain rooms and helped those like me understand what life in hiding was like. [What life?] The tour was concluded with a room asking us for our opinions on current issues regarding freedom. It is interesting to see how Western countries - supposedly all the same in their godless capitalism - disagree so strongly on these issues. For instance, in the Netherlands all police wear the same uniform, the same signs of authority, without any personal touch. That is, those who feel they need to wear extra garments because of their faith will not be able to enter the squad. Quite different from the freedom of expression of religion people enjoy here! It also proved hard to find your own balance between freedom of religion and freedom of opinion.

We did manage to get out of the quiz [which probably features on BBC every year anyway] and headed for our next shot of culture in the Van Gogh Museum. This museum might lack some of the master's greatest works [such as Starry Night], but it gives a perfect history of the artist's life, his ideas, and his influences. It also provides you with enough space to see the paintings from a distance [quite rare in Dutch museums] though some benches or chairs would have been nice [doesn't feel right to use the museum floor to rest]. As usual, we managed to visit this museum right between two major exhibitions, though time and energy didn't allow us for any more cultural absorption, and the works seen were magnificent enough to leave us satisfied!

With another short rest in the Vondelpark we took our final tram ride on the way to my sister's place for some hospitality. She did a fine job taking the final baton to finish the great display that all Dutch people have a firm control of the English language. [That sentence actually had a different flow, but I liked the repetition of "fi".] Eventually, she took us to the airport which was just a minute away and after some final speed shopping [hagelslag! stroopwafels!] we were on our way.

And now I'm here, still wasting my time, but ready for a new term! It was good to be home and see everyone - even if only for 2 hours or so. Work is calling now, Rev and maths tomorrow and this weekend - bring it on!