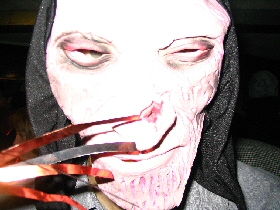 Spooky! And people thought that alcohol only had negative effects? If it weren't for the 3 pints (+the lack of knowledge of my new camera) I would never have taken these utterly scary pics. Challenge is to find out what's actually depicted! (OK so the picture is called 'Oscar' so you know who it is… but still :)). Anyway, having had a look at the Halloween gallery, I finally found out what the 'P' function does with my pictures (I thought it was me heavily shaking while taking the picture but no…).

Halloween Ball itself was OK - interesting that there are more people enjoying Alien Ant Farm than I thought there'd be. Also interesting to see that it was mainly girls walking around with the devilish horns from Wilkinson (my friend bought them for me – I swear!). Don't remember too much from the night actually – apart from the txt message I got from the X-factor thanking me for my vote (just want to see Voices With Soul again!).

Last night – actual Halloween – was more fun, that is, if you like being terrorised by 7–10 yr olds from Canley. After 5 visits I'd run out of candy (that is, I ate half of it and the rest I had in store I didn't want to give away) and my (Chinese – not too welcome in the neighbourhood) flatmate was spooked so I decided to turn off the light – especially when the kids started to ask for money! I hope they didn't get as sick from the pepernoten* as I did though!

*Dutch treat handed out by Sinterklaas (St Nicholas) and his helpers to celebrate his 'birthday' 6 December – my parents just sent me loads of 'em so fortunately I had something to hand out!