Follow-up to What is Literature? from [TBA]

In my altruistic plan of sharing the great movie High Fidelity, I encountered a setback last night when my friends told me it was a chick flick. Wordspy defines chick flick as a movie with themes, characters, or events that appeal more to women than to men.

The argument was that High Fidelity did not agree with any of the standards of what the antonym of a chick flick would be: think explosive, fighting, little or no talk for several minutes, and lots of swearing. Ironically enough they just mentioned this when one of the characters screamed you fucking asshole and five minutes later another character was in an ideal world beaten up to pieces with a phone and an amp. Right. 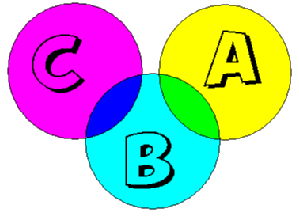 To make it all a wee bit clearer, I thought I'd delve into elementary maths and draw you this Venn diagram. A stands for the action and SciFi movies (chick flick antonym), think Star Wars, Rambo, or any James Bond; B includes movies such as Being John Malkovich, The Big Lebowski, Schindler's List, so movies with some arguable artistic value, that lack explosions and relationship-talk; C then stands for the feel-good movies, encompassing the whole chick flick genre, including Legally Blonde, Pay it Forward, and any Disney movie. The overlap between B and C is to leave some room for films like The Matrix or most of Tarantino's movies; A and C overlap for Forrest Gump or Almost Famous.

Any mathematician can tell you that when chick flicks are encompassed by group C, that doesn't imply that any feel-good movie is a chick flick. High Fidelity, being a somewhat feel-good movie with the arguable artistic value, does not have to be a chick flick. It is however in a more precarious position as the main character talks about relationships 90% of the time to his audience, i.e. the viewer. But chick flick? I'd still say no. Men have a chance to connect with the main character Rob (John Cusack), and still feel good about themselves (like the main character does). Women, however, could connect to the main female character, who ends up being 'too tired not to be with' Rob. Not quite the successful strong woman Julia Roberts tells them to be!

I'd agree that High Fidelity is a feel-good movie, still in good company with say Forrest Gump or As Good as it Gets. And I would not be surprised if the movie has a higher appeal with women than with men, but to put it in the same little box with The Sweetest Thing, or any Meg Ryan movie just doesn't feel right. Wordspy's definition is too broad: the classic chick flick is there for women to feel good and to provide them with role models. Movies about relationships might be more enjoyable for women, but surely they're not necessarily chick flicks?